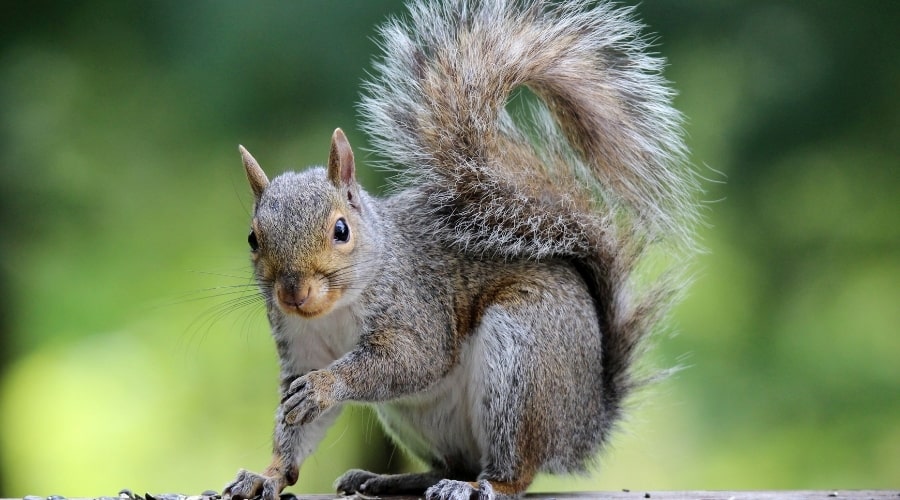 Squirrels sometimes seem to hiss, but it’s actually a secret sonic call to warn others that a predator is nearby. This isn’t the only odd and squirrely behavior they show.

Sometimes squirrels will roll around in circles or even stagger in perpetual circles. Why do squirrels walk in circles? Should you be worried? Can you help?

Why Do Squirrels Walk In Circles

3 Reasons Why Squirrels Walk In Circles

If you spot a squirrel walking in circles, there is something wrong with the squirrel. This does not mean you should run to the rescue.

It’s important to leave squirrel rescue and rehabilitation to a professional. Moreover, some of the reasons squirrels walk in circles can indicate an issue the squirrel could pass on to humans.

Here are the three main reasons why squirrels walk in circles.

A squirrel will sometimes fall from its tree as an unweaned kitten. Likewise, adult squirrels can knock their heads badly. It’s not incredibly common for squirrels to suffer brain injuries, but it does happen.

It’s easiest to tell the squirrel has neurological damage when you can see problems on the head.

A broken skull, smashed in snout, broken teeth, or bleeding from obvious head wounds is a key indicator. Sadly, a squirrel can also have serious internal trauma without any external signs.

As the PA Daily Post, points out baby squirrels can also fall victim to tree-trimming related trauma. As humans encroach into their wild spaces, animals are forced to live with the results of our behavior.

Waiting to trim trees until autumn when squirrels move to dens and many birds have left their nest to head south will help cut down on this sort of injury.

A baby squirrel is not easy to care for. They need more than a mee milk substitute. Small squirrels don’t pee or poop on their own and must be stimulated.

After they reach five or six weeks old, they will pick up the habit, but it will still be another five to seven weeks before they can self-feed.

Typically, a squirrel with a head injury will need two or three months of recovery time.

Happily, many can return to the wild, but when the trauma is too severe, some neurologically damaged squirrels become completely dependent on humans for their care.

Lyssavirus, commonly known as rabies, is transmissible to any mammal or warm-blooded animal. However, it is fortunately rare in squirrels.

You are much more likely to encounter this disease in raccoons and other animals. Nevertheless, it is a possibility.

If you think an animal with rabies has bitten you, go to the hospital and seek help right away. According to Sciencing, rabies is zoonotic, which means it passes between animals and humans.

Foaming at the mouth and ‘crazy’ behavior aren’t the only things to be concerned about with rabies. In fact, the foam and even the weird aggression can be absent in rabid animals.

When symptoms of rabies go away, it is nearly always fatal. However, the human rabies immune globulin (HRIG) treatment you can get from a simple shot can save your life, and it is approximately a hundred percent effective.

Signs of rabies include, but are not limited to the following:

Viola Securus or squirrel roundworm is also zoonotic, transmitting easily between species of animals and even humans.

The squirrels get roundworms from accidentally ingesting the larvae of these parasites. When the eggs hatch, the larvae use the squirrel as a host.

Sadly, squirrel roundworms can be fatal to squirrels and humans. Newly hatched roundworm larvae travel around the body.

While this is always dangerous and will make any creature or person ill, it is perilous in the lungs. If you have been exposed to wild squirrel poop, it is vital to go to the doctor.

Signs of squirrel roundworm are as follows:

Why Do Squirrels Go In Circles

In addition to walking in circles, squirrels will sometimes roll or climb in circles. However, it’s the walking (or running) behavior you should be most concerned with.

Squirrels, especially when they are young, have a lot of energy. While it isn’t prevalent, some squirrels roll around to play. This playful rolling is not accompanied by scratching but rather is a normal young squirrel being silly.

Instead of perpetual rolling, as you might see when a squirrel has a parasitic bot fly infestation under its skin.

A squirrel rolling around scratching is likely to have parasites, and you should not touch them. While the bot flies aren’t dangerous to humans, an itchy and frustrated squirrel may bite.

Always treat squirrel bites right away and clean them out thoroughly to prevent infections.

Squirrels climb in circles for two very different reasons. First, they will circle the trunk going up or down to better view the area.

Doing this helps a squirrel spot predators and problems so it can reach its goal safely.

Secondly, when squirrels chase each other in circles around the tree, it’s a sign of a home invader. Squirrels are very territorial, and the visiting squirrel is not welcome in an established squirrel’s tree.

The chase is part of a territorial display and is meant to send the outsider on their way.

Helpful Tips To Know About Squirrels Walking In Circles

When squirrels start circling, there is almost always something wrong. Whether they are suffering from head trauma or contagious with roundworm, it is essential to leave them alone.

Call animal control or a specialist rather than trying to save a potentially zoonotic animal.

Here are more helpful tips to know about squirrels walking in circles.

Any time you see a squirrel or other wild animal behaving strangely, you should pay attention. However, if you are not a professional animal rescuer, veterinarian, or animal care specialist, please do not approach a circling squirrel.

They may look cute and confused, but sometimes they can have a dangerous and transmissible disease.

link to Do Squirrels Lay Eggs

Continue Reading
link to Do Squirrels Always Land On Their Feet

Do squirrels always land on their feet? I've watched squirrels jump from one limb to another from dangerous heights but have not witnessed one catastrophic fall. Healthy uninjured squirrels manage to...