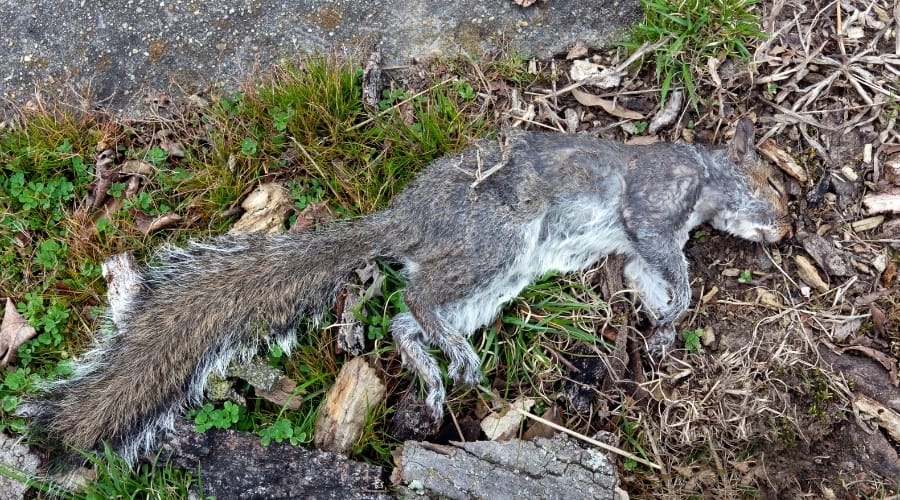 Grey squirrels often live only a year or two. However, they can survive up to 12 years in the wild or an astounding 20 years in captivity.

Yet people rarely see a squirrel dead unless it was playing in traffic. As fast as they are, squirrels are far from mysterious, so where do squirrels go to die?

Where Do Squirrels Go To Die

Squirrels will not go to a certain place to die. Instead, death happens upon them, typically at a fairly young age between 1 to 6 years. Common places to find the remains of squirrels who have died are squirrel nests in trees, underground burrows, on the side of the road and dung from animals who have eaten the squirrel.

Where Do Squirrels Go To Die Naturally

When a squirrel reaches the end of its natural life, it can likely sense something is off. The best evidence for this is where squirrels go to die naturally. Often an ill or older squirrel will ‘go to ground’ in its nest to pass away.

If they do this, there are two likely outcomes. Either the squirrel dies of whatever is wrong, or a predator sniffs it out. Their bodies slowly desiccate and rot in the first case, becoming only bones in a nest over months or years.

After the squirrel dies, its body will remain soft for a few hours. The next stage, rigor mortis, causes a stiffening of the corpse.

At this point, there is still little smell unless it is scorching outside. The tissues have not broken down yet. Although animals often defecate and empty their bladders (poop and pee) when they pass, not much else will happen for a while.

Once rigor mortis has passed, the tissues again soften up. It is at this point that microbes and fungus begin to take over, breaking down the tissues.

The smell will certainly be noticeable for days or even weeks if the body is left untouched.

Eventually, these microscopic living things, along with insect larva, will use up what remains of the meat and tissues leaving fur, ligaments, and bone behind to mark the creature’s passing.

Alternately, if predators get ahold of a dying or newly dead squirrel, they will eat it. Tiny carnivores may only chew at the body.

However, most larger animals will eat the entire squirrel. In many cases, the fur and bones will pass through the predator and end up in their dung. For owls, it comes out as a pellet.

Where Do Old Squirrels Go To Die

Elephants have graveyards, so do humans. Ants will remove the corpses of colony fellows to prevent a bacterial outbreak, but squirrels are not the brightest or philosophically deepest creatures. Moreover, relatively few squirrels die from old age.

Because they are active, most squirrels will get spotted by a predator and hunted down long before they can die of natural age-related causes.

Plus, as squirrels age, they are more likely to slow down, and as a result, get caught by a hungry animal.

Hawks, foxes, cats, and other small to medium-sized predators find a squirrel, at any age, to be a tasty treat.

Badgers, weasels, and even mountain lions will also gobble up a listless aging squirrel. It doesn’t take much in nature to fall behind and land in the jaws of a hungrier, younger animal.

If an old squirrel feels ill, it may retreat to its nest or den. Old squirrels would then die of dehydration or starvation when they have a deadly illness and weaken too much to care for themselves.

Other squirrels will not stop by to check on it with a snack or a cooling cloth for its head as they are highly territorial animals.

This may seem sad to us as a human, a pack animal, but it’s their way. Life moves on without a hiccup. Perhaps a predator gets an easy meal one night, or it may desiccate and rot inside its home.

According to Penn State, Great Horned Owls are fond of taking over squirrel nests, so an elderly or infirm squirrel would make a good meal while also offering a new ‘apartment’ the bird doesn’t need to clear out.

In the case of ground squirrels, there’s an even more disturbing possibility. Sure, a snake might grab it, but if the squirrel dies inside its home, it may get eaten by other ground squirrels.

These unsentimental creatures are cute but not terribly discerning about their food, and they are well-documented cannibals.

Where Do Squirrels Die

Squirrels typically die running from predatory animals. However, those lucky enough to make it home or live a very long life tend to die in their own nests.

Here are a few of the places you can find the remains of squirrels who have died.

Helpful Tips To Know About Where Squirrels Go To Die

To some, squirrels are insolent and often destructive pests who bring fleas and steal birdseed. For others, they are adorable fluffy tail tree puppies to be cherished. Whatever your stance, you probably haven’t seen many dead squirrels.

Here are some helpful tips to know about where squirrels go to die.

Like so many wild animals, squirrels rarely live to old age. It is part of the natural cycle that animals who become sick, weak, or slow tend to end up as a meal for other animals.

In some cases squirrels will even eat their own kind, though it’s not a first-choice meal. A very fortunate, healthy, and long-lived squirrel may survive twelve or more years if it can avoid hunters, cars, owls who want to eat it and move into its nest, accidents, and disease.

However, squirrels who die at home are just as likely to end up as food posthumously. Decaying corpses have an odor and plenty of animals scavenge remains for their meals.

link to Are Squirrels Safe To Eat

For many, the idea of eating squirrels is appalling. However, squirrels have been hunted and eaten for years, but are squirrels safe to eat? Squirrel meat is safe to eat, but with caution....

Continue Reading
link to Do Squirrels Get Attached To Humans