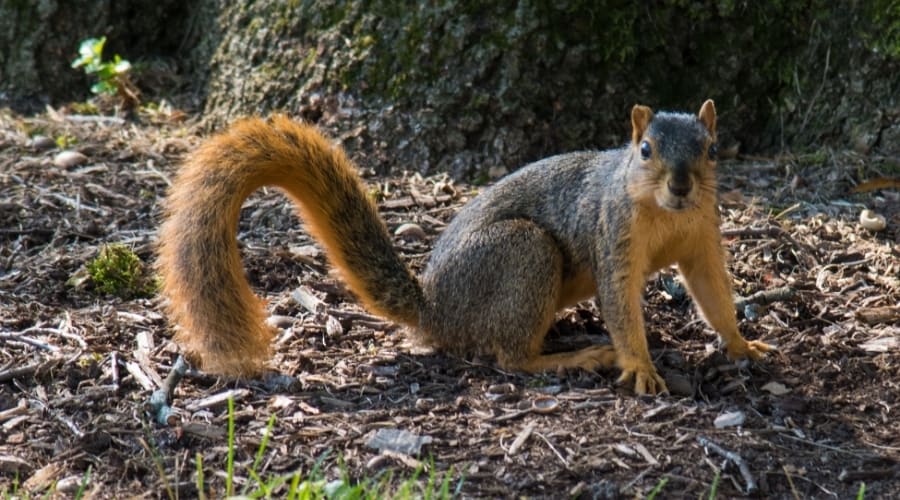 Do squirrels always land on their feet? I’ve watched squirrels jump from one limb to another from dangerous heights but have not witnessed one catastrophic fall. Healthy uninjured squirrels manage to land on all fours consistently.

Under normal conditions, squirrels always land on their feet. Squirrels are crafted by nature’s design to equip them for landing on their feet every time they drop to the ground.

I was curious about how they accomplished this, so I did some research. The facts about squirrel landings are fascinating.

Here is everything that I know about how and why squirrels use their super ability to make perfect landings from any height.

Why Do Squirrels Always Land On Their Feet

Landing on their feet is an instinctual behavior that comes naturally to squirrels. They know precisely how to move their bodies without thinking about it.

That’s just part of the reason why they always land on their feet. A falling squirrel will make the necessary adjustments on the way down to ensure that he falls on his feet.

How Do Squirrels Always Land On Their Feet

Physics, instinct, and air resistance all come into play.

Squirrels are built with bodies that place their center of gravity low. Their weight distribution and balance combined with the shape of their bodies use gravity to cause them to fall in a manner that forces their feet in a downward position.

If a squirrel gets tossed out of a window, he is likely to flip over with his four feet pointing downward as a result of gravity and physics.

When there is air resistance in play, from higher falls, squirrels have a tail that they can use as a rudder to navigate their body positioning to achieve a better body position for a four feet on the ground landing.

Instinct helps them to calculate things like velocity, drag, gravity, and the weight of their falling bodies without overanalyzing the situation.

You could say that it comes to them naturally. Squirrels are generally small and light creatures with little pull from gravity.

There are a lot of different body adjustments and movements that they can make to parachute their bodies down at various angles to survive impacts from high falls.

Do Baby Squirrels Always Land On Their Feet

Some baby squirrels can land on their feet, but many cannot. It all depends on the age of the squirrel and its development.

Baby squirrels start to resemble adult squirrels at 8 weeks. By age 10 weeks they master more of their motor skills and learn to use their claws for climbing and hanging.

The tail is full and bushy by 10 weeks old and they are far more physically active.

Squirrels can fall from 40 feet or up to 200 feet and still land on their feet. It’s less likely that a squirrel’s body will take damage for lower height falls.

It’s estimated that a squirrel will consistently land on its feet from any height, but the real question is what the most survivable falls look like. Yes, a squirrel can survive a 200-foot fall.

Squirrels are capable of achieving some of the most amazing landings. There are different varieties of squirrels that can have many different methods for falling and making landings.

Some of them appear to combine play and precision moves to land on the ground in a variety of poses.

Here are the different poses that squirrels give when they land on the ground.

Flying squirrels are known for making a big entrance when they come in for a landing. Their bodies have a flap of skin covered with fur that unfurls in a fall to resemble a sheet.

This gives them a parachute effect. It allows them to glide through the sky from incredible heights, and land safely on the ground on all four feet.

This is a common landing style/pose for flying squirrels that they do with some frequency. It provides greater safety when landing and it gives them more control over how fast they fall, how far they travel, and greater precision in where they land.

Flying squirrels look like Batman when they make their landing. They descend with all four feet on the ground and make a silent landing.

This is because their feet are strong and padded. They instinctually extend their front limbs down followed by the back limbs.

This gives them the edge of stealth if there are predators nearby. These squirrels resemble a superhero when they make their descent.

Flying squirrels sometimes glide toward the ground, then pull up slightly when they are making a precision drop. This is to control precisely where they land.

They are agile creatures with good control over the movements of their muscles. They leverage the laws of physics along with environmental conditions to land in a certain spot.

They may appear to hover for a second before dropping their forearms down to land with front feet first by split seconds, followed by a firm planting of the back feet.

Helpful Tips To Know About Squirrels Landing On Their Feet

The best way to know more about how squirrels land is to observe them in nature. Their landings are fascinating to watch.

Most squirrels maintain the same landing habits, but they do take various factors and situations into account.

Squirrels may need to make emergency landings that make them hit the ground harder than they would like. They still land on their feet, however.

Here are a few tips about squirrels landing on their feet.

Do squirrels always land on their feet? Unless a squirrel is badly injured, it will consistently land on its feet. Squirrels are agile creatures that possess firm control over their powerful muscles.

They instinctually know how to move their bodies and distribute their body weight to orchestrate some of the most perfect landings possible.

They’re capable of gliding from heights of 200 feet to achieve a perfect and safe landing without injury. It’s rare for a squirrel to make a rough landing unless it’s under abnormal circumstances such as injury, or extreme weather conditions.

Flying through the air, jumping through tall trees, and making soft landings on the ground is their second nature. It’s fascinating to watch them in action and to observe the precision of their gliding and landing skills that can cause them to drop practically anywhere on the ground they want.

link to How Do Squirrels Bathe

It’s difficult to catch squirrels in the act of bathing but not because it’s an especially rare behavior. They’re just a little too quick for most of us to see. The best way to spot how...

Continue Reading
link to Do Squirrels Get Attached To Humans