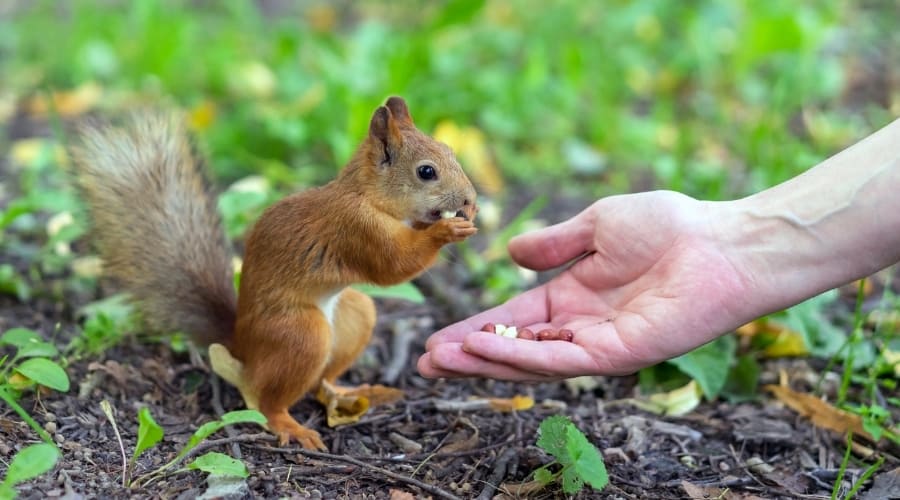 People will argue that squirrels can make great pets. While they do have great memories and will come around for food, the question is do squirrels get attached to humans?

Squirrels have great memories and can become accustomed to humans that regularly leave them food. However no real attachment forms because they are inherently wild.

Research has shown that squirrels remember people that feed them, especially if orphaned and raised by a human. With squirrels being wild, there are many questions surrounding if they should be domesticated and whether or not they form an attachment to humans the same way as cats or dogs.

What is wild should stay wild but understanding how squirrels interact with humans can be a great place to nurture nature.

How Do Squirrels Get Attached To Humans

Squirrels are essentially wild, but they see humans as a source of food. Especially humans that have provided food for them in the past.

Squirrels are intelligent and have great memories, so always keep in mind which humans have given them food before. They become accustomed to human behavior rather than forming an attachment to humans.

Squirrels are typically less afraid of humans than they are of other animals which makes it possible for squirrels to develop patterns with humans.

They can also be trained to come for food so long as it is offered on a consistent basis. But it is important to remember that they are unpredictable, with sharp claws and the likelihood of carrying diseases, which makes them not ideal for human companionship.

Do Squirrels Interact With Humans

Squirrels will not approach humans typically but in many cases, within urban areas, squirrels have become accustomed to human behaviors and are not threatened by their presence.

This means there can be opportunity for some interaction. But this is rare. For instance, squirrels are happy to share a path with humans, but when people look at them or turn in their direction, they run off.

In very rare cases, orphaned squirrels have been raised by a person, and then released into the wild. Experts believe that in cases like this, squirrels will interact more with their human host then a squirrel born in the wild would.

Even squirrels born wild will remember human hosts that regularly leave food for them and will return to ‘visit’. The more often food is left for a squirrel, the more used to a human it can become.

Direct and close interaction is highly unlikely, but the squirrels will definitely return in the same way that birds will often visit the same bird feeders.

Squirrels are known to be intelligent and have demonstrated that they have great memories. Orphaned squirrels that have been raised by a person and then released in the wild, have been seen to return to that house time and time again.

There are also numerous studies that document squirrels returning to homes and humans that have regularly provided food for them.

Researchers have even gone so far as to set up experiments to test the memory of squirrels. A tool was constructed that required squirrels to press bars in order to get a nut.

It only took them 8 seconds to figure this out and then after understanding the mechanism, it took 2 seconds to get every additional nut.

The researchers then presented the same tool to the same squirrels two years later, and it took them 3 seconds to push the appropriate bar.

There is a lot going on in the daily life of a squirrel, especially in the wild. Not only are they foraging for food, but they have to be constantly aware of their surroundings and potential danger.

They’re only thoughts regarding humans are whether they are a threat or if they have food, so there is not a lot to remember.

If you are deemed not to be a predator and they got food from you before, they will remember and they will come back.

Squirrels do not understand English. If you want a squirrel to trust you, your actions are what matters. You can mimic the chirping sound they make each time you see them.

When you have their attention, throw them some food. This is the best way to communicate with a squirrel. With repetition, the squirrel will become accustomed to you, and will no longer see you as a threat.

They will understand by your actions that you are safe and providing food. In fact, making noises like them and moving slowly, is the best way for them to understand that you are not a predator.

Being loud and talking a lot or making sudden movements will be unsettling for them. Once they are used to your presence, you can have a conversation with them if you want.

But they will likely just stare at you while eating the nuts you left out for them.

There is always a debate between animal lovers and wildlife experts when it comes to this question. The simple answer is no. At the very least, you should keep the feeding to a minimum.

The squirrels you encounter in the world are not the same as the ones that run through the trees in your yard. Most experts would even agree that leaving treats out for the neighborhood squirrels is harmless.

Squirrels that you encounter while camping or out in nature are a different story. Because squirrels have a great memory, they can become accustomed to being fed by humans.

As with all wild animals, this can replace their drive to search for food and it can be difficult for them to readjust to having to forage for themselves.

Additionally, you should leave baby squirrels alone. It is likely that the mother is searching for food. If you do notice that a mother does not return, contact a local wildlife center.

There is also the risk of being bitten or scratched and this is true for all squirrels, even the ones in your trees. If they become too comfortable with you to grab food from your hands, this risk becomes greater as a result of squirrels being unpredictable.

Squirrels can also carry diseases that can be potentially harmful to humans and your pets. The occasional treat for the local squirrels is fine, but you may want to limit interactions so they can stay wild as intended.

Helpful Tips To Know If Squirrels Get Attached To Humans

Just because squirrels are wild does not mean you cannot leave food for them. We leave bird feeders out for birds, and this is no different.

Squirrels are wild but they can develop something similar to attachment for humans that provide food and safety on a regular basis. When it comes to squirrels getting attached to humans, there are some helpful tips to keep in mind.

Squirrels are wild animals and even though some have been raised by humans from birth, they are inherently wild. This does not mean that a squirrel will not come around you and remember you.

If you have squirrels living around you and want to start feeding them on a regular basis, they will continue to return for food. So, do squirrels get attached to humans?

If you are not a threat to them, they will come around you, and while it is not a true attachment in the sense of the word, it is as close to one as a squirrel and human will get.

link to Are Squirrels Teeth Sharp

Are squirrels' teeth sharp? It's a reasonable question considering how long squirrel's teeth are. Did you know that a squirrel's teeth can grow as long as three to six inches? Watching them open...