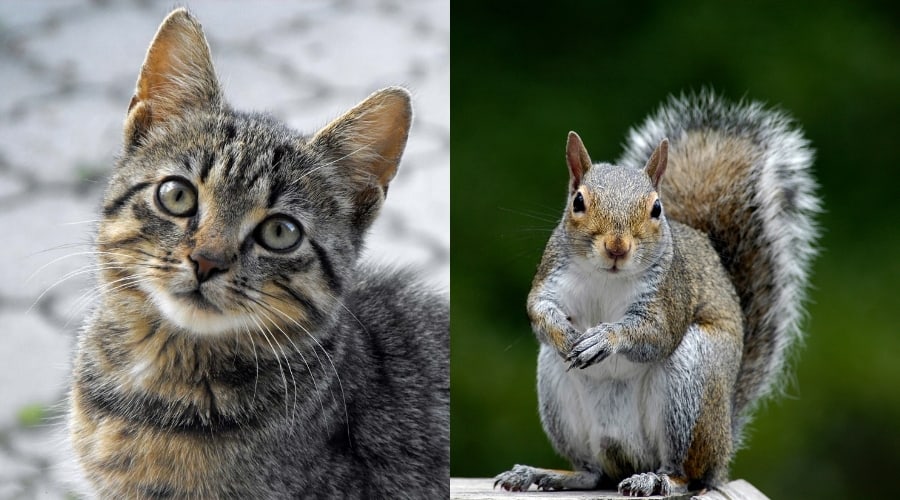 The fastest squirrels are the Eastern Grey Squirrels, who almost double the speed of their red squirrel cousins. Humans can theoretically outrun squirrels, but what about cats? Are squirrels faster than cats?

Are Squirrels Faster Than Cats

Squirrels are not faster than cats. Top speed for a cat is around 30 mph while an Eastern Grey Squirrel can run up to 20 mph. Most squirrels would run and climb a tree long before a cat got near them, but a cat can outrun the fastest squirrel by around 10 miles per hour.

Can A Squirrel Outrun A Cat

A squirrel cannot outrun a cat. There are always exceptions to this rule, such as having a good head start or a cat who is obese and can’t move quickly. However, the healthiest squirrel versus the healthiest cat on a straight track will always lose.

Squirrels have shorter forelegs with hand-like appendages. These are excellent for grabbing but not as good for running.

Meanwhile, their long back legs that are great for climbing and jumping. If you want to run fast, it helps most species to have more evenly balanced legs.

On the other hand, cats don’t have ‘hands,’ but rather possess more even legs with paws on all four feet.

They are capable jumpers, reaching up to around seven feet laterally, but they are even better speed-runners. In fact, large cats are known for their speed.

The cheetah is the fastest land animal at up to 80 mph. Meanwhile, lions, cougars, and jaguars clock a respectable 50 mph.

Housecats are relatively slow by comparison at a mere 30 mph, which would still beat Usain Bolt, the fastest known human, by two miles an hour.

The Eastern Grey Squirrel is the fastest runner of its species. These little guys can run up a tree at over 12 mph.

Alternately, on the ground, these quick squirrels can reach up to 20 mph, according to Squirrel Enthusiast. That means a fast human could run a straight line faster than a squirrel, but cats would come out ahead in a three-way race.

How Fast Is A Squirrel

With 65 species of squirrels in the US, that’s a lot of ground to cover. However, it’s easy enough to look at the fastest. The Eastern Grey Squirrels are the track stars of the squirrel world. Here’s how speedy they can get.

The Sciurus Carolinensis or Eastern Grey Squirrels are quick on their feet at 20 mph. While that won’t outpace a cat in a foot race, squirrels have several tricks up their lack of sleeves.

For one thing, they know how to ‘serpentine’ to evade capture.

These fast little tree-dwellers can often reach safety without a scratch by zigzagging back and forth on tiny feet.

Lucky for the squirrels, they have incredibly muscular hind legs that are great for a burst of speed when they need it. Moreover, they are double-jointed in the hind legs, so these squirrels are super movers that can pull off acrobatic stunts.

Additionally, a grey squirrel can jump about five feet straight up. According to Birds and Blooms, these incredible animals can jump seven feet laterally to get to a new tree or branch.

On top of that, they can drop about nine feet down and land on their feet to get to birdfeeders or evade hungry predators.

Is A Squirrel Faster At Climbing Than A Cat

They are lighter and nimbler than cats, so squirrels are faster at climbing than a cat.

Your house cat can climb up a tree fairly quickly, but there are several problems chasing squirrels upward.

First, the squirrel can clock over twelve miles per hour straight up the trunk, which cats cannot.

Second, a squirrel has a standing high jump that is more than half as high as the cats, giving it a good chance to start climbing.

On top of those two issues, squirrels watch out for each other. They will call out sub sonically to send warnings to other squirrels that danger is near. Even if the cat catches the squirrel on the ground, it will often evade capture.

Finally, house cats get stuck in trees. While they are built well for going up a tree, their bodies have a problem getting back down.

Unlike squirrels, they cannot turn their bodies upside down to watch their step as they descend. Also, being back-end heavy, they often struggle for a good grip on loose bark.

Curved retractable claws and a powerful back end give housecats an advantage for getting a forward start.

Jumping, running, and climbing as long as the cat faces the direction they intend to proceed is no problem. Sadly, moving backward with those same features adds difficulty.

Squirrels have a secret superpower when it comes to getting down a tree. You’ve probably seen them moving down a trunk headfirst at some point, but this upside-down climbing is a result of a surprising feature.

Most rodents, cats, and other creatures have ankles that lock their feet in facing one direction, but not squirrels.

A squirrel has ankle joints that swivel. Not only does this give them a much larger range of motion going up and down trees, but it also allows them to dangle and turn more easily than other animals.

A squirrel’s ankles are a lot like an owl’s neck.

Can A Squirrel Swim Faster Than A Cat

Cats are slow swimmers. While all cats can swim in an emergency, only a few like ocelots and tigers do it for fun.

You can expect the average cat to do a slow one to three miles per hour doggy paddle type swim, and they probably won’t like it. Moreover, cats do not swim to hunt.

Squirrels are surprisingly good swimmers. They have been known to swim up to a mile, though they generally prefer to avoid water.

The only recorded pace for swimming squirrels is about two miles per hour. So, in the water, cats and squirrels are just about even.

Notably, the cat will probably care more about getting out of the water than swimming after a squirrel.

Helpful Tips To Know If Squirrels Are Faster Than Cats

Cats and squirrels are an interesting match-up when it comes to speed. On the ground, a cat is faster, but only in a straight line, and they jump higher, though not by much.

However, squirrels are the undisputed kings of climbing, and they can likely swim a lot further.

Here are some helpful tips to know if squirrels are faster than cats.

Squirrels are extremely fast, and we often see them portrayed as super-speedy on television. However, this is mostly for show because squirrels aren’t as quick as they seem.

Cats can run much faster than squirrels, and an in-shape human could also keep up or outpace them. Climbing is a different issue.

Squirrels climb faster than they run, and not much can keep up with that. Plus, they can leap from thin branch to thin branch in a manner neither cats nor people could ever hope to mimic.

Staying up off the ground when predators are nearby is how squirrels stay alive. The only things that can snatch a moving squirrel out of a tree are raptors like hawks and owls.

link to Do Squirrels Get Attached To Humans