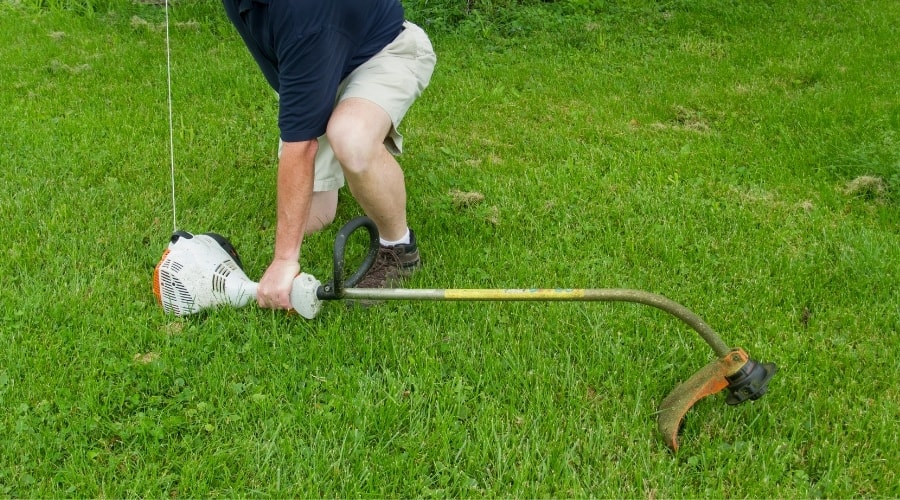 The choke on a weed eater is how you start the engine. Without it, your machine would not run. The valve your choke controls changes the fuel-air mixture inside the engine, allowing it to combust.

You need a richer fuel mixture on startup. Unfortunately, sometimes your weed eater will only run on half choke, leaving you wondering why. I will help demystify what happens inside the engine so you can fix it.

Why Does My Weed Eater Only Run On Half Choke

A weed eater only runs on half choke when there is dirt or a clog in the carburetor or gas cap that needs to be cleaned. A dirty carburetor will restrict fuel and airflow. When the check valve in the gas cap is clogged, the fuel creates a vacuum and gets vapor locked. The choke allows air inside.

My Weed Eater Will Only Run On Half Choke

When your carburetor gets dirty, it can unnecessarily restrict fuel and airflow, and your weed eater might need to run on half choke.

It takes a surprisingly small amount of blockage before your weed eater stops running correctly. Since weed eater engines aren’t very big, even a minor issue can cause a much more significant effect.

I will explain how it works and what to look for to see if this is your issue.

How Does The Choke Work On A Weed Eater

When you toggle the choke button on your weed eater, it moves a small valve. This valve restricts or opens the air intake, which in turn causes the fuel mixture to become richer.

Ultimately, this allows your engine to cold start. When the fuel-air mix lacks air, there’s no way to spark the fuel, and when it has too much air, the fuel won’t catch and keep burning because there’s nothing to burn.

The choke buttons on weed eaters aren’t always in the same location. Fortunately, you can identify it quickly because of the symbol.

The weed eater choke symbol is two horizontal lines, usually raised up, with a long slender diamond shape between the two like brackets around a letter.

There should be two of these symbols, one above the other. On one symbol, the diamond is also horizontal, and on the other, it is vertical.

The vertical lines with a narrow vertical diamond between means the choke is off. This is almost always the symbol on the bottom.

Above this, a second, similar symbol with the narrow vertical diamond looks a little like a capital H laid on its side. The shape in the middle doesn’t always have to be a diamond.

Sometimes the center part of the symbol is more of an oval or line, or in the case of Stihl, it’s like a long thin oval with a circle in the center.

Regardless, if it’s facing the same direction as the lines above and below it is off, and if it’s opposite the bracketing or diagonal between lines, so it looks like a weird sideways H or an N, then it’s the ‘on’ symbol.

2 Stroke Only Runs On Half Choke

Two-stroke engines that are only running on half choke often have dirty fuel caps. While this may seem like no big deal, a fuel cap allows air to enter the engine to replace fuel as it burns.

When this doesn’t happen, the fuel creates a vacuum and gets vapor locked.

The choke allows air inside as well, which is why your two-stroke only runs on half choke. Fully open or fully closed, the amount of air to fuel isn’t right, either too high or low to allow combustion.

Below are some specific examples of common problems that cause the same issue for various weed eater brands.

Husqvarna Weed Eater Only Runs On Half Choke

Husqvarna is one of the oldest outdoor tool companies, over three hundred years in business, and it makes very high-quality tools.

When this brand finally has the half-choke running issue, it is typically after several years of use. A professional who maintains lawns for a living can expect one to three years of service out of their equipment.

Meanwhile, a private homeowner who only occasionally does the yard may get ten or more.

Even the best quality products will eventually wear out. In this case, check other common causes first, then replace or rebuild the carburetor.

I recommend a Husqvarna Carburetor Kit from Amazon. Since these are genuine OEM parts, they will fit a Husqvarna weed eater and help you get a longer life out of your machine. 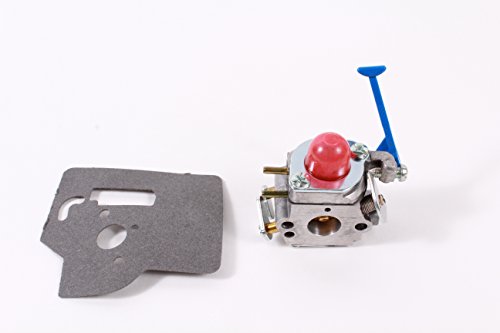 Troy Bilt Weed eaters can begin to only run with choke because of a broken fuel line. While replacing the line is a quick and simple process.

You simply remove the clips that hold the line in place at each end and pop it right off. Putting a new line on is as easy as placing the line and cinching it down again with clips.

The problem with a broken fuel line is that it also makes it easy for debris to get into spaces where it shouldn’t. I recommend draining and cleaning the engine if this is your problem.

Stihl Weedeater Only Runs On Choke

With a Stihl Weedeater, a dirty carburetor s often the culprit. All you need to do in this case is drain it, spray it down with carburetor cleaner, and give it a scrub.

Then make sure you refill it with the proper fuel mixture. However, before you do that, check to ensure it’s not a fuel cap issue.

The easiest way to tell if a clogged fuel cap is the problem is to unscrew the fuel cap partway to let air in and start the engine again.

If it runs without the choke, then you need to replace your fuel cap. I suggest leaving the cap on until you have a new one to avoid wasting fuel and prevent debris from getting inside.

When you have a replacement, swap the parts and you should be good to go.

Ryobi Trimmer Only Runs Half Choke

Some Ryobi Trimmers need to run for ten to fifteen minutes to warm up. However, you can also try swapping out your spark plug as this is often the first part to go on this brand.

You can often diagnose this simply by looking at the plug to see if it looks rusty, worn or cracked. A sub-par or broken spark plug can cause engine running problems that mimic other issues.

To change your spark plug, turn off the engine, unplug the sparkplug and use a spark plug wrench to pop the old one out.

Once you insert the new sparkplug and reconnect it, do a quick test run. If this solves the issue, you’re done. If not, reinstall the old sparkplug and save the new one for when you need it.

Helpful Tips To Know About Weed Eater Running On Half Choke

An adequately maintained weed eater shouldn’t need the choke turned to half-on to run. The only purpose of the choke is to enrich the fuel blend so the machine can start cold.

Here are some helpful tips to know about weed eater running on half choke.

A weed eater that only runs on half choke is typically clogged. However, there are several parts of the engine that can have issues that contribute to this bizarre outcome.

Fortunately, a full cleaning and inspection will usually yield the solution. Most of the parts that get clogged are fixable at home.

Less frequently, the fuel to oil ratio is off and the solution is to drain the engine and replace it with the correct fuel mix for your model.

Regardless of the cause, getting your machine back to normal functioning is a DIY most people can handle little more than an owner’s manual and a couple of basic tools.

Weed Eaters go by many names such as weed eater, brush cutter, weed whacker, line trimmer, string trimmer, and strimmer. By any name, weed eaters allow you to manage edges and corners where no mower...