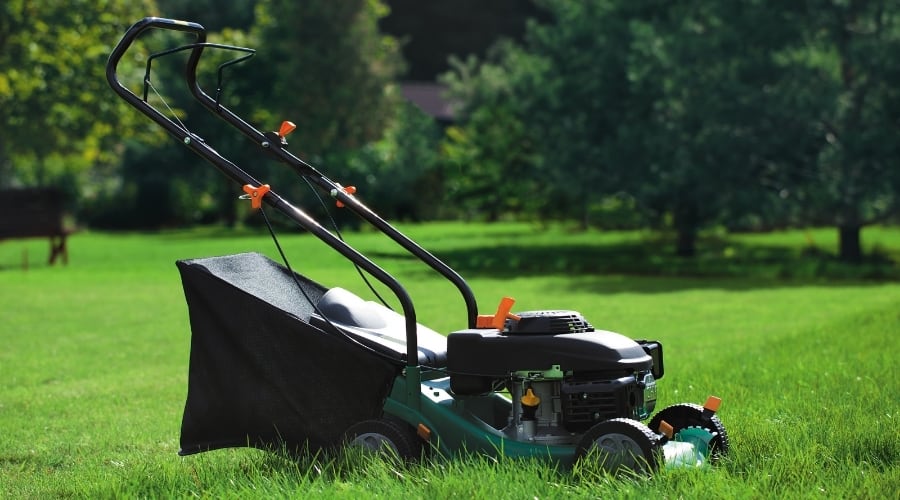 The first patent for a choke valve came from 1948. Robert O Walton submitted the original design, and without his clever invention, engines would be far less reliable than they are now.

They’d be more prone to stalling and catching on fire. Small, seemingly unimportant parts can make a world of difference in a lawnmower. What is the choke position on a lawnmower?

The choke position on your lawnmower determines whether the butterfly valve is open or closed which regulates the air intake and affects the amount of fuel that flows into your carburetor. Use too much fuel, and the engine won’t start, or it floods, but too much air will cause stalling, so the choke creates proper balance.

What Does Choke Mean On A Lawn Mower

Choke on a lawnmower means adjusting the amount of oxygen mixing with the fuel in your carburetor.

Since the fuel oxygen mixture has to ignite and burn to create power within the engine, having the right proportions is crucial. Your choke button opens and closes a vent inside the lawnmower.

If someone says their lawnmower ‘choked,’ they are probably using slang to mean it stopped working.

Otherwise, when you see it in your owner’s manual or someone says ‘the choke’ on a repair video, they refer to some part of the airflow control system.

How Does A Choke Work On A Lawn Mower

The choke on your lawnmower is surprisingly simple. The button connects to a wire, and the wire regulates a valve. This valve, known as a butterfly valve, can be closed off or wholly or partially open.

Most of the time, a choke valve needs to be nearly closed. The small amount of air that it lets inside evaporates some of the fuel. The gaseous fuel and air mixture are what powers your lawnmower.

An internal combustion engine requires a choke when cold because droplets of fuel doesn’t evaporate well.

The choke reduces the flow of air into the carburetor’s throat, reducing the internal pressure allowing more fuel to be pushed into the combustion chamber.

This helps the engine start and run until the internal temperature has increased through combustion.

What Is The Choke Position On A Riding Lawn Mower

The choke on a lawnmower is usually on the left-hand side of your riding mower. Often accompanied by pictures to indicate fast or slow, using the choke is simple. All you need to do is move the lever.

Whether you should open or close the choke depends on your riding mower.

Which Way Is Choke On

The choke on your lawnmower is usually off or closed when the lever is down. In this case, ‘down’ means toward your body on a riding mower.

However, this will be on the handle or just slightly down the handlebar on the right side on a push mower. You should be able to reach and flip it with your thumb.

How Do You Know If Choke Is Open Or Closed

If you have it set correctly, the choke is closed or nearly closed when you cold-start your engine.

You can tell the choke is open when it lets a lot more air inside to mix with the gas, as it should when the machine is running completely.

A higher airflow allows fuel to combust continuously, which is how your engine keeps running.

Different lawnmowers use different symbols. A common one is a dot with a line through it between two more lines.

If the line through the dot is diagonal or completely sideways, it means closed. Alternatively, when that line is parallel to the bordering lines (straight up and down), it means the choke is open.

Another typical choke symbol is a rabbit and turtle. These are symbolic because most people know the story of the tortoise and the hare. The rabbit means faster, and the turtle is slower. You would move from slow to fast as the engine warms up.

Sadly, there isn’t a universal symbol for the choke. Some look like a snowflake, and others can be simple, like arrows. Your owner’s manual will tell you where to look and how to operate it.

Mower choke levers are very simple. Typically, they are “L” shaped, and one end goes down into a small hole on your machine. The other end has a shaped paddle/leg so that you can flip it quickly.

To replace a broken choke lever, you often don’t need any tools. The lever will pull out of the hole manually and replacing it with a new one is as easy as slotting it into place.

I recommend checking out this video to see how a Briggs and Stratton choke lever is replaced. You can also see another version of the choke symbol, which looks like an elongated line-gradient arrow with the dot-line symbols at either end on this model.

Some lawnmowers have an automatic choke. This will set the choke to full when the engine runs, so you don’t need to worry about it.

Regardless of whether it is automatic or not, the lawnmower choke cable is vital since it connects your lever to your machine. Moreover, the line itself is a moving part that changes the position of other internal components.

The choke and throttle cables are identical. Both of these are coils of wire with a heavier wire inside.

At the end, there is a z-bend so the wire can slide into a small hole that controls a moving part by pulling it up or pushing it down to move the valves inside.

The choke position on your lawnmower primarily determines whether you can cold start the mower. In some cases, you will have a fuel bulb instead or in addition to help force gas into the engine.

Here are more helpful tips to know about the choke position on a lawnmower.

Whether your choke position is on or off, that button controls an air valve inside your engine. The valve lets more or less air in, depending on what you need.

In some cases, a lawnmower may only run on half choke, which indicates your fuel to air mixture is off, and you need to do maintenance.

The right mix of gas and oxygen will burn efficiently, saving you money as you run your machine, but it can cause stalling and other problems when the balance is wrong.

Proper care and maintenance of the choke valve are essential to your lawnmower’s continued function.

link to 5 Best Lawn Mowers For A Tall Person

If you are over six feet tall you likely have wondered what is the best lawn mower for a tall person? It can be a real pain to mow the lawn without the right mower, but don’t worry, we are here to...

If your grass is not looking quite right, you may need to learn how to increase lawn mower height. To get the best cut and healthiest grass, your mower needs to be set right first.