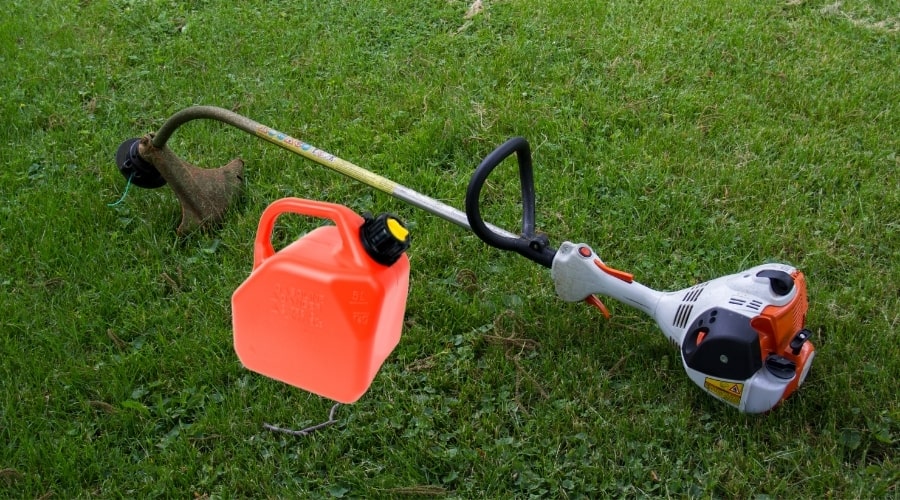 Weed Eaters go by many names such as weed eater, brush cutter, weed whacker, line trimmer, string trimmer, and strimmer. By any name, weed eaters allow you to manage edges and corners where no mower could reach.

Gas models are easy to use, but what happens if you put straight gas in a weed eater? I’ll demystify the need for blended fuel, so you don’t wreck your weed eater.

What Happens If You Put Straight Gas In A Weed Eater

If you put straight gas in a weed eater, it will cause the engine to overheat and seize up. Without oil to act as a buffer and lubricant, the internal parts of the engine will grind together causing friction. The resulting friction creates too much heat that damages the engine.

Engines are not intuitive like a good cell phone operating system, so you can’t ‘just put gas in’ and expect it to run. Different types of engines use separate gas.

Additionally, a two-cycle engine’s fuel and oil ratio are very different from pure, unlubricated gasoline such as you’d use in your car.

Below is a list of three things that can happen to your weed eater if you use straight gas.

1 – The Engine Will Overheat

The first thing that will tip you off that your gas is wrong for the weed eater engine is heat. Without oil to act as a buffer and lubricant, parts inside your engine will rub together.

The resulting friction creates heat. Unfortunately, that’s not all.

As parts of the engine that were not supposed to touch and grind together, it will cause damage quickly. The internal components will become scratched and broken.

It’s important to have the correct fuel, but it also needs to be reasonably fresh. Older fuel can settle, causing sediment to settle in the bottom.

Additionally, the fuel and oil will separate in the container as it sits. You should always check that the cap is secure and give it a good shake before adding more to your tank.

Change the fuel in your weed eater completely every thirty days. Draining all of the old oil and fuel mixture will help prevent damage when it’s not getting used up regularly.

Moreover, it would be best if you never stored a trimmer long-term with any fuel inside. It doesn’t take much moisture to eat away at an engine.

Overheating is the first problem and a warning that your engine is in danger, but it might still be salvageable at that point.

Assuming there was still oil leftover from your previous fill, the parts could survive a minute or two with the wrong fuel.

However, if you don’t immediately turn it off and drain the gas, the problem will worsen.

It only takes a minute or two before the pistons seize. Inside your engine, the pistons move in reaction to the expanding fuel.

You should be able to hear the sounds of repeated knocking. The nose will get notably worse over time.

Like any unusual sound, you should immediately turn off the engine if it makes an odd noise. Unfortunately, by the time it reaches this stage of damage, the engine is probably not salvageable.

Damage to the inside of your weed eater’s engine may also cause fuel leakage. As the internal components grind and pistons lock up, pressure from gas combustion is still pushing on the inside.

Although it’s unlikely to do anything dramatic like explode or crack open, smaller gaps can open from the damage.

If your trimmer starts leaking gas, it is essential to get it somewhere it can drain safely. A plastic tub is ideal because it has no drain and can handle having gasoline inside it without damage. Never allow gas to leak on the ground.

When gas or gas and oil from having the wrong blend in your weed eater gets into the dirt, it will sink in. Sadly, this can contaminate the groundwater supply.

Washing it away with water or letting rain take care of it is equally bad because the fuel will flow into whatever drainage you have in your yard.

Even rinsing it onto an asphalt street will eventually wash that gas into a drainage hole. Contaminating your drinking water is never a wise plan.

There is a type of weed eater that doesn’t require oil, but it’s electric. Regardless of engine size, fuel ratio, or brand, all other weed eaters need some oil to run.

Without the oil, there is no lubrication, and parts can grind together.

It is equally important to remember that your weed eater needs an oil change if it doesn’t use premixed fuel.

According to e-how, you should swap out the old oil after the first ten hours and then again after every twenty-five hours of use.

Your weed eater can’t run on straight gas. Putting it inside will destroy your engine, and repairing it often costs more than buying a new one. Check out this video for a graphic view of what happens to a two-stroke engine.

Here are more helpful tips to know about what happens if you put straight gas in a weed eater.

Just like a car, putting the right fuel into your weed eater is essential to maintain its function. A weed eater that you put straight gas into will cease up, overheat and stop working.

If you don’t catch it quickly enough, you could end up replacing the engine completely. Moreover, you need the precise blend for your make and model, or you’ll have the same problem, but more slowly.

Taking the time to read your owner’s manual and seek out or blend the right oil-gas mixture will save you a lot of trouble. Plus, it can extend the working life of your weed eater’s engine.

Weed eaters are one of the most commonly used gardening tools. Most people do not realize they do more than just get rid of weeds. You can also use your weed eater for edging. You just need to know...

Continue Reading
link to What Causes A Weed Eater To Smoke: (5 Reasons)

If your weed eater is smoking or overheating, you need to stop using it. Then, you need to find out what causes a weed eater to smoke so you can get it fixed right away.