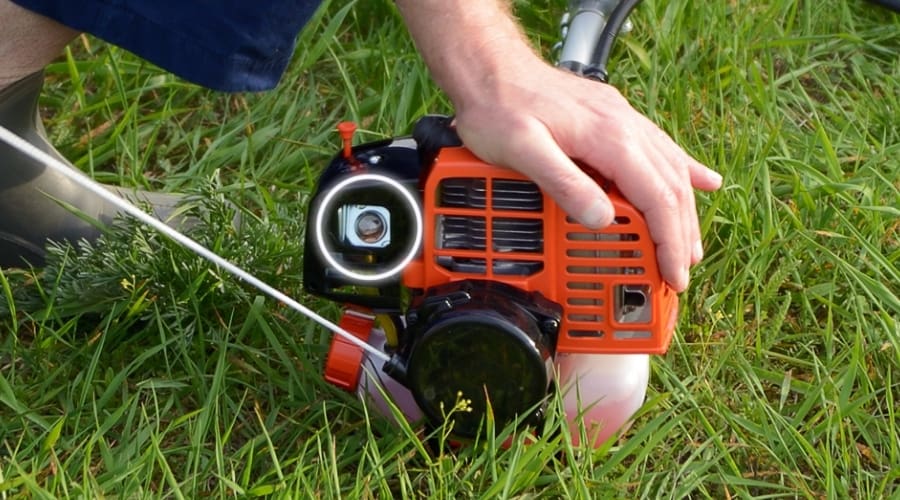 When George Ballas of Houston invented the weed eater, he named it for its ability to ‘chew up’ weeds. Although they go by many names, strimmers are all variations on the clever, simple design George pioneered in 1971.

The most significant change since then is electric power on some models. Are weed eater primer bulbs universal? I’ll share everything I know about priming your string trimmer so you can tidy up the yard.

Even though weed eater primer bulbs look surprisingly similar and perform the same function of forcing small amounts of gas into the carburetor, they are not universal. Three crucial variables which include different mounting methods, sizes and materials used make primer bulbs proprietary and only work on brands and models that use each specific primer bulb.

Are All Primer Bulbs The Same On Weed Eater

Though they aren’t universal, all primer bulbs are the same in one critical way; they do the same job. These bulbs are made to force a small amount of gas into the carburetor on your weed eater so it will start.

Without fuel, the ignition has nothing to light, and the machine won’t run. While you may need it every time you start your engine, the primer bulb is especially vital for new engines because no existing fuel is flowing through the system.

Once the process is started, your weed eater will continue burning fuel as it runs. The used-up gas undergoes a chemical reaction and comes out as fumes, which in turn pulls more fuel to where it needs to be, and air rushes in to fill the gap.

Airflow is also essential to the process, not only for combustion but also to prevent gas use from causing a vacuum within the machine, leading to a vapor lock.

Are Primer Bulbs Interchangeable On A Weed Eater

For example, MTD makes John Deere, Craftsman, and Troy-Bilt, so they often have interchangeable parts. Additionally, according to the MTD website, this company builds several regional brands like Rover, Remington, and Yard Machines.

Don’t fall for the so-called universal primer bulbs you see in stores or online. Not all primer bulbs are the same on all weed eaters.

Because they are built by different companies, the specific size and, more importantly, the way they fit varies. The word ‘universal’ in a product name is not a guarantee.

All gas lawn trimmers need a primer bulb, so in a sense, the bulbs are a universal requirement, but that doesn’t mean they’ll fit every make and model.

The search for universal primer bulb replacements is a frustrating endeavor. There are a lot of generic parts that claim this lofty title, but most fall short of the reality.

Instead of seeking out a ‘magic’ fix-all, you need to know exactly what to look for to get the correct bulb for your weed eater.

Primer bulbs are not typically listed by size but by type. For example, a “Primer Bulb” may only include the flexible bubble piece that you push.

Meanwhile, a “Snap-in Primer Bulb” usually has a housing and is made to be easy to swap out since you pull the whole part and put the new one in its place as an entire unit.

Craftsman primer bulb replacements are not universal. This company uses two different styles of primer bulbs. The first is a snap-in part that is black and red. These may come attached to a carburetor or as a multipack.

The second type of Craftsman primer bulb replacement is a simple red dome piece. These take the place of broken domes in some older styles of weed eaters, and they also come in multipacks.

It isn’t easy to find a single primer bulb. However, both of these bulb types will fit other MTD manufactured string trimmers, so the two styles are semi-universal.

MTD parts are not universal out of laziness but rather practicality. To keep costs reasonable, the company doesn’t manufacture proprietary parts for similar products.

This means you have more options in-store if you need a replacement part because you can grab one with another brand name and still have the same piece in a different package.

It also means you pay less for the engines, replacement parts, and outdoor equipment provided by the massive company regardless of who puts their name on the finished product.

The Stihl weed eaters have a tall bulb that looks a bit like the bottom half of an acorn made from a transparent or colored see-through material that will allow you to see the gas inside. These small domes do not come in a snap-on, one-piece unit. You can only replace the bulb itself. Look for a clear or greyish-see-through dome.

The nice thing about Stihl is that color aside; these domes are universal within the brand. Moreover, you can use Stihl primer bulbs to replace Husqvarna primer bulbs if they break.

Echo weed eater primer bulbs are always transparent. You will find them as separate domes or connected to a black snap-in base.

Depending on which weed eater you have and how the part is damaged, the bulb parts are universal among Echo weed eaters. Sadly, the snap-on version may not fit every model.

I had a tough time finding more information on these, so I recommend checking your owner’s manual for the exact part you need. When in doubt, contact customer service for the company and ask them directly.

According to Lawn and Landscape, John Deer used to own all Homelite products and the Homelite line was manufactured in Chihuahua, Mexico.

You can use a Craftsman compatible dome or snap-on part if you need a replacement.

Having a primer bulb is what makes fuel move through a non-running engine so it can start. While primer bulbs are a universal feature, that only means that all similar machines have a variation on this part.

Below I’ve included some helpful tips to know if weed eater primer bulbs are universal.

These umbrella terms don’t guarantee anything, and sometimes they are nothing more than appealing names. Weed eaters do not have universal primer bulbs to fit every make and model, though they ‘universally’ require this part to start the engine.

This sort of terminological trickery can get very confusing. The key takeaway is that you need to seek out a specific replacement primer bulb that fits your brand and model of the string trimmer.

Otherwise, you may get stuck with a neat but ultimately useless part.

link to Weed Eater Spark Plug: 10 Things You Should Know

Continue Reading
link to What Causes A Weed Eater To Smoke: (5 Reasons)

If your weed eater is smoking or overheating, you need to stop using it. Then, you need to find out what causes a weed eater to smoke so you can get it fixed right away.