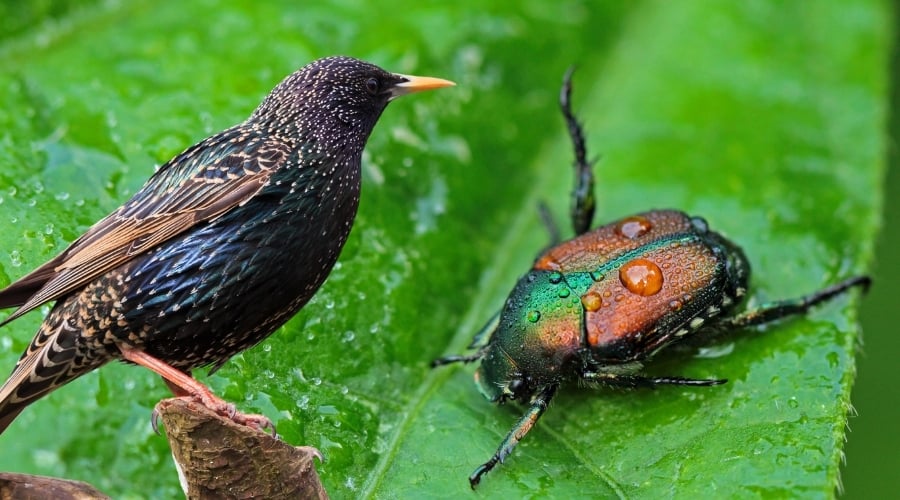 Japanese beetles are not native to the US and are an invasive species that does a lot of damage to gardens. You are much more likely to spot these tiny insects on sunny days as they prefer to come out and eat when it is warm.

Luckily these pests have plenty of predators in nature. Do birds eat Japanese beetles? After years of gardening, I have faced Japanese beetles before, and I’ll share what I learned.

There are a vast number of birds who will eat Japanese Beetles and their larvae (grubs) as a food source which include Cardinals, Meadowlarks, Catbirds, Sparrows, Blue Jays, Robins, Crows, Finches, Grackles and Starlings. Since most birds are omnivores, and many insectivores, most birds would at least eat a Japanese beetle if they were hungry enough.

Birds can eat Japanese beetles if their diet includes grubs or adult beetles. Many bird species thrive on grubs and beetles.

Crows, for example, enjoy a fat juicy Japanese beetle larva, so when you see these birds scratching at your lawn, it’s best to let them dig for food.

Japanese beetle babies are called grubs, and they live underground, eating plant roots. Female beetles will burrow and lay just two to four eggs two to three inches deep in the soil at a time.

However, they will deposit a total of forty to sixty eggs in various places around your yard. This gives the future grubs space to spread out and feed.

In late summer, Japanese beetles hatch and eat. By fall, they will burrow down another four to eight inches to overwinter, and they are much harder for birds to find.

Happily, other creatures like digging squirrels, moles, and voles can reach them easily at this depth.

The grubs will again move up near the surface to feed on grass and plant roots in the spring. Birds can dig for them at this time, but they will soon enter the chrysalis phase and become adult beetles.

Two weeks after becoming pupae, ravenously hungry and ready to defoliate your garden, the adult beetles will hatch and make their way to the surface.

This is when adult beetle-eating birds like cardinals are most likely to catch them.

Some birds are picky eaters, but most like to eat anything they come across that suits their dietary needs in the wild.

According to Audubon, birds have taste buds, though fewer than humans. However, this doesn’t mean their sense of taste is ‘crude.’ It’s very likely that birds enjoy what they eat.

Starlings and robins are among several species that eat both adult Japanese beetles and grubs. Though we have no way of telling which one is ‘better,’ individual birds probably have a favorite food.

Most insect-eating birds will eat Japanese beetles. However, there are a few species of birds that wouldn’t touch them intentionally.

While most birds are omnivores, eating both plants and insects, some are strictly herbivores, and others have specific dietary needs.

Birds who don’t eat insects will not go out of their way too much on beetles of any kind. Mostly sage grouse, parrots, and those with specialty diets like flamingoes will avoid eating beetles.

Penguins and ostriches are also unlikely to dine on Japanese beetles since it would mean going far out of their way merely to find them.

Birds can eat dead Japanese beetles. However, the beetles would need to be recently deceased since most species that eat bugs do not eat carrion. Once rot sets in, the birds are going to avoid the insects just like other non-scavengers.

It takes a specially adapted stomach to handle meat, even bug meat, that has been dead for a while. Birds that eat carrion are often less likely to encounter Japanese beetles.

However, crows will eat almost anything, including carrion, so they don’t mind a few dead bugs.

What Birds Will Eat Japanese Beetles

There are a vast number of birds who will eat Japanese Beetles. Since most birds are omnivores, and many are insectivores, that means the majority of birds would at least eat a Japanese beetle if they were hungry enough.

Here is a list of North American birds that will eat the Japanese beetles in your yard.

It can be tough to keep track of what every bird in your yard eats. Blackbirds will eat insects, which means Japanese beetles are potentially on the menu.

Birdwatchers have seen the local blackbirds eat Japanese beetles. They may not be a favorite food of this species, but they’ll eat the pests when they are around.

Like their blue cousins, the Blue Jays, Bluebirds are insectivores. According to The Spruce, they will eat grasshoppers, weevils, and other plant destroyers like the Japanese beetles.

Having Bluebirds around is an excellent way to help manage pest insects in your yard because these ravenous little birds can eat up to two thousand insects per day.

Hummingbirds are often lumped in with herbivores by accident. Most of their diet does consists of nectar, and they are vital pollinators.

However, these tiny birds are omnivores that will eat small insects like the Japanese Beetles. Although the tiny hummingbirds don’t dig for larvae and grubs, they will happily swallow smaller beetles as they eat.

If you love seeing the bright jewel tones of hummingbirds in your yard, then you’re probably also happy to know that they are both pollinators and pest control.

However, you have to take extra steps to ensure your hummingbirds can keep eating those pesky Japanese beetles.

Here are a few helpful tips to know about hummingbirds eating your Japanese beetles.

Japanese beetles can do immense harm to your garden in a very short time. Luckily, there are plenty of ways that you and nature can work together to help wipe this invasive species out.

Skip the pesticides that might harm birds, butterflies, bees, and other beneficial pollinators. Instead, opt for planting geraniums around your garden beds.

The chemical in geranium leaves causes paralysis in Japanese beetles. A paralyzed bug is an easy target for birds and other natural predators who will happily eat them.

You can also pull them off by hand when you spot Japanese beetles on sunny days.

link to How Many Eyes Does A Fly Have

Fruit flies are incredibly annoying, but they could help computers learn to see in color thanks to a complex brain-to-eye interaction. It turns out that some flies have a circuit in their brains...

Continue Reading
link to Do Flies Come Back To Life