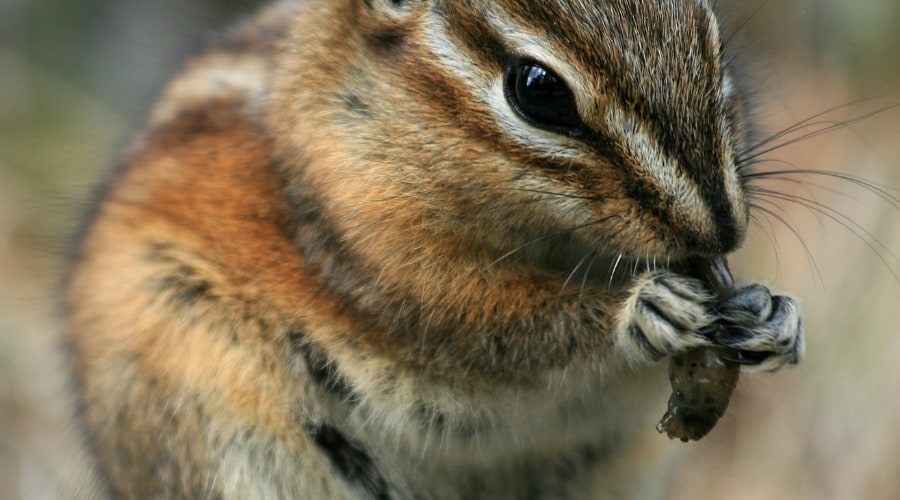 A squirrel can find food buried beneath a foot of snow, and they always stash more than they need.

Because these quick little creatures may lose up to 25 percent of the nuts and seeds they stash, they even pretend to hide nuts just to throw crafty thieves off the scent of their true hordes.

What about other food sources? Do squirrels eat grubs?

Do Squirrels Eat Grubs And Worms

Squirrels do eat grubs and worms however they aren’t a squirrel’s first choice. Squirrels are opportunistic omnivores because they will eat most things that can fit inside their mouths like nuts, grubs, worms, eggs, small snakes, seeds, fruits, caterpillars, and fungi. Squirrels eat grubs as a supplement or in hard times when they aren’t getting enough protein.

Squirrels belong to a group known as opportunistic omnivores. That means they will pretty much eat anything they think their stomachs can handle.

Birds who live in trees to escape most ground-bound predators may still find hungry squirrels raiding the nest. Worse still, when the birds are from a smaller species, they might also be on the menu.

The only thing squirrels don’t eat is carrion. That is a special job for more hardy stomachs.

The most alarming thing that some squirrels eat is other squirrels. According to Business Insider, male red squirrels will kill and eat litters from desirable females.

This is especially common when there’s plenty of food because the females are much more likely to have a second litter if they know they don’t have to worry about winter shortages.

How Do Squirrels Eat Grubs

Raccoons are clever creatures that have been known to roll up sections of human lawns to find grubs and insects.

However, when you see a squirrel digging in the grass, it’s not for the same reason. The squirrel may be picking bugs or seeds off the surface of your lawn, or it might be burying something to snack on later.

When squirrels bury nuts, the ground ages them and leeches out the bitter tannins. This is especially important if you eat a lot of acorns, like many squirrels.

Your lawn is probably home to a bunch of ‘nuts,’ and other small stashes, or even fake stash spots.

Most of the time, squirrels come across grubs accidentally. It is merely a side effect of digging to bury food. They will eat them happily but typically aren’t actively hunting for these protein-packed treats.

Why Do Squirrels Eat Grubs

Grubs may look gross and squirmy to us, but to a squirrel, that is a calorie-dense, protein-packed bonus snack. Despite our bias, grubs are incredibly nutritious.

Especially when you are a small, energetic, tree climbing creature who digs, runs, and jumps all day, more calories are usually a good thing.

It might look like all that eating and storing food for winter is in preparation for hibernating, but tree squirrels do not hibernate.

Ground squirrels do, but they aren’t the ones we usually think of sleeping all winter. Since tree squirrels remain active in winter to hunt for their stashes of food, a grub makes a nice light snack while they’re slaving away storing it all.

Squirrels don’t seem to have any problem eating grubs. However, that’s not quite the same as saying they like them. Most squirrels prefer to eat nuts and seeds. Moreover, like most mammals, they have a highly developed sense of taste and smell.

It’s hard to say whether grubs taste great when there are no studies, and a human can’t conceive of the differences.

Many animals, like squirrels, have senses thousands of times more capable and refined than ours. Also, nuts are a whole lot easier to hunt because they never run away.

If you think it’s sad and perhaps you should just feed the squirrels something nicer, please don’t. Humans feeding squirrels is a huge problem, but not for the reason you may think.

The squirrel will still go out and hunt up its own food. These animals are scavengers who perpetually track, eat and store food.

However, these adorable fluffy-tailed menaces have no idea when to stop. They will eat whatever you give them and a year’s worth of nuts, seeds, insects, grubs, and other more natural squirrel repast.

In short, it can kill them from overeating if you give the squirrels too much food. Additionally, most human food is packed with sugars, salt, and other unhealthy additives that aren’t good for the squirrels or us.

How Often Do Squirrels Eat Grubs

A squirrel will eat any grub it comes across. Because they lack the good sense to stop eating, squirrels will munch down a snack if they happen across it.

Bugs like worms, grubs, and caterpillars do not store well for winter. Rather than cutting into their winter supply storage, chewing up the bugs when they find them makes a suitable meal.

Moreover, squirrels eat more bugs like worms, crickets, and grubs when there’s less of their preferred nuts and seeds around for protein.

Since squirrels lack the technology to make jerky, they need to eat insects fresh. Intriguingly, there is some evidence that squirrels may store grubs with other foods if they come across enough of them.

Do All Squirrels Eat Grubs

All squirrels eat grubs. The only reason there would be an exception to this rule is when grubs are not available.

People who keep squirrels as pets (not recommended) are unlikely to feed their quasi-domestic squirrels’ fresh grubs. Otherwise, any squirrel in nature is likely to find at least a few grubs now and then to enjoy.

Grub worms are the immature or larval form of scarab beetles. They often infest laws eating the grassroots and killing off the grass, much to the chagrin of homeowners.

However, they also occur in less manicured settings such as fields and meadows.

Ground squirrels, like their tree-dwelling cousins, are mostly herbivorous but not exclusively. A ground squirrels’ diet consists mostly of whatever is fresh and in season. They will eat plants, nuts, seeds, insects, and, yes, grubs.

As the University of California’s Integrated Pest Management Program points out, ground squirrels emerging from hibernation are less likely to indulge in these nutritious treats.

Instead, newly awakened ground squirrels feed “almost exclusively on green grasses and herbaceous plants.” Later in the seasons, as seeds and nuts become ripe, the squirrels start to store their overwinter foods.

This is when they are more likely to encounter grubs.

Squirrels are a lot of fun to watch, but they can be a real menace around your home. These clever and rather acrobatic creatures raid bird feeders, dig up lawns, and generally make themselves at home wherever they find themselves.

Here are a few helpful tips to know about squirrels eating grubs.

Squirrels are opportunistic, scavenging omnivores that eat most things they can fit in their mouths when they are hungry enough.

Although the bulk of these animal’s diet consists of plants, nuts, and seeds, they will also happily eat insects and other small creatures.

Especially when they aren’t getting enough protein from their food, squirrels will turn to meaty sources to fill that gap in their diets. Though it may seem disgusting, a squirrel sees a grub as a tasty and sometimes a necessary snack.

link to Do Squirrels Eat Tomatoes

Squirrels are interesting creatures. They have some odd eating habits, and they actually eat a variety of foods that you may not expect. While the average gardener may find the squirrel to be an...