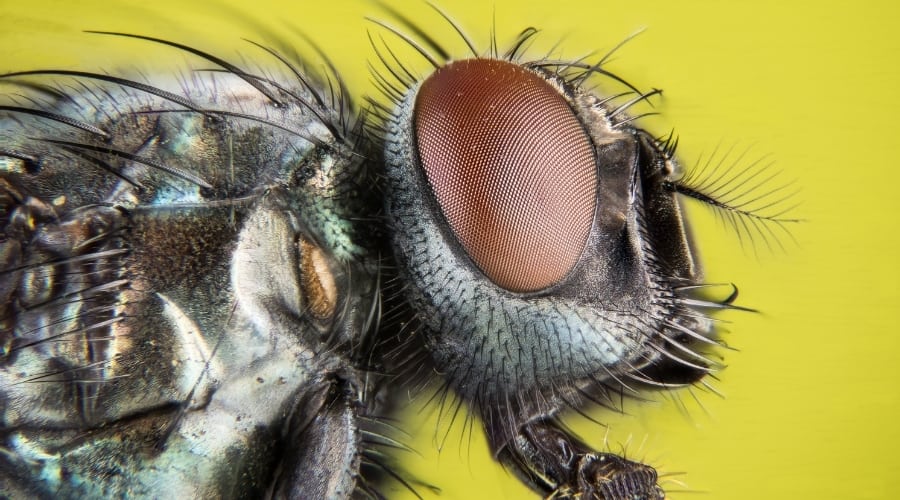 Fruit flies are incredibly annoying, but they could help computers learn to see in color thanks to a complex brain-to-eye interaction.

It turns out that some flies have a circuit in their brains that allows them to see light almost exactly as humans do, and that isn’t the only incredible thing about flies’ eyes.

I’ll share everything you need to know about how many eyes a fly has and how they work.

How Many Eyeballs Do Flies Have

Flies have 2 large Compound Eyes which consists of 3,000 to 6,000 Simple Eyes that give them the ability to see a wider range around their bodies without the need to move their heads. In between their Compound Eyes are 3 triangular shaped Simple Eyes called Ocelli used for navigation.

How Many Lenses Does A Fly Have

The dragonfly is not a true fly, but they have an astonishing 30,000 lenses in their amazing compound eyes. True flies have a range of different lens numbers.

It is common for flies to have anywhere from 150 to 8,000 lenses per eye. However, the Ocelli Eyes some flies possess only have a single lens each.

How Many Pupils Does A Fly Have

Flies do not have pupils. Sadly, that means they cannot control how much light enters their eyes. In some cases, blue light has even been observed, causing permanent damage to the fly’s eyes.

According to Futurity, this mostly occurs in older flies.

Compound Eyes are incredibly detailed, but the images they receive are not. Moreover, only Arthropods possess this bizarre sensory organ.

Flies often can’t see beyond a few feet away, but why have ultra-complex eyes if they aren’t great at actually seeing things?

The advantage of the Compound Eye structure is all in the range. By sacrificing the definition, flies and other Arthropods get the ability to see a wider range around their bodies without the need to move their heads.

That is a big deal if you want to wear an inflexible exoskeleton.

Do Flies Have A Lot Of Eyes

Not all flies have the same number of eyes. With over a hundred and twenty thousand species of flies known to science so far, that means the variations are vast.

Even flies called “Blind Flies” have eyes. Most species of flies have either 2 or 5 eyes.

How Many Eyes Does A House Flies Have

A housefly has two main eyes, but that is merely the surface appearance. In reality, these are composed of 3,000 to 6,000 “Simple Eyes” clustered together to make this ingenious visual masterpiece.

In addition, they have three smaller simple eyes known as ocelli.

The Ocelli Eyes are always centered between the two main Compound Eyes and are mostly used as a compass. Essentially, they help keep the housefly gyro stable by telling it which way is up.

How Many Eyes Does A Horse Fly Have

Unlike the Common House fly, a Horse fly lacks Ocelli. Instead, they make do with 2 larger Compound Eyes. Of course, as the name implies, the horsefly is larger than other flies anyhow.

Intriguingly, a horsefly’s Compound Eyes are good for more than vision. You can tell the gender of the fly in question by observing its eyes closely. If the fly is male, the eyes touch.

Females have eyes separated by a thin black band.

How Many Eyes Does A Fruit Fly Have

Tiny fruit flies have two main eyes. Each of these eyes has 750 individual lenses. Moreover, it takes two-thirds of the fruit fly brain to process its visual input.

How Many Eyes Does A Blue Bottle Fly Have

The Calliphora Vomitoria is also known as the bluebottle fly, is easily identified by its stunning metallic blue color.

Additionally, since the females are known to lay their eggs in fresh corpses, they are often used to calculate the time of death based on how far along the eggs are in their cycle, but these flies should be known for their eyes.

The two eyes of bluebottle flies have more lenses than almost any other fly species. Each eye has a stunning eight thousand lenses, giving these flies a unique perspective on the world.

How Many Eyes Does A Blow Fly Have

Blow Flys are not a single species. According to Wikidiff, this name applies to any member of the genus Calliphoridae “that lay their eggs in rotting meat, dung, or in open wounds.” As a result, the number of eyes differs, as do the lenses.

In short, a so-called blowfly can have anywhere from 2 to 5 main eyes. If you include the housefly, that number can go up as high as twelve thousand and three.

How Many Eyes Does A Crane Fly Have

Crane flies are even smaller than fruit flies. This species is about the size of a mosquito. They lack the additional Ocelli, so crane flies have two eyes.

One of the strangest things about these two-eyed flies is that people say they are among the most venomous insects on earth. Yet crane flies have no venom at all and are actually completely harmless.

How Many Eyes Does A Common Fly Have

A common fly is another name for the house fly. If that wasn’t confusing enough, people often call any fly inside their homes a housefly.

Like the blowfly, this is not a species. Depending on where you live, the most common fly in your area could be very different from what another person calls a ‘common’ fly.

How Many Eyes Do Black Flies Have

Much like the blowfly, a blackfly is not an individual species but rather a family group. In this case, blackflies are all the Simuliidae of the Culicomorpha infraorder. Blackflies have 2 Compound Eyes.

Helpful Tips To Know About The Eyes Of A Fly

Compound Eyes like those found on flies are truly bizarre. Naturally, since they are limited, flies don’t have the sort of near-omnipotent range you may have seen represented on TV.

All the lenses work together to create one large and not very crisp image of the world as it flies past.

Here are a few more helpful tips to know about the eyes of a fly:

If you are small, short-lived, and often hunted then having wings is a smart choice. However, having eyes that let you see everything around you at all times is even better.

When you add an exoskeletal armor layer to protect your body and eyes, then you’d have a pretty fair chance of survival. Fly eyes are a highly effective long-term solution to a short-term problem.

link to How Often Do Butterflies Eat

Butterflies are one of those species that make do with what they have to get the proper nutrients. In fact, if there is nothing to eat, the butterfly will simply eject their stomach contents....

Continue Reading
link to Do Flies Come Back To Life