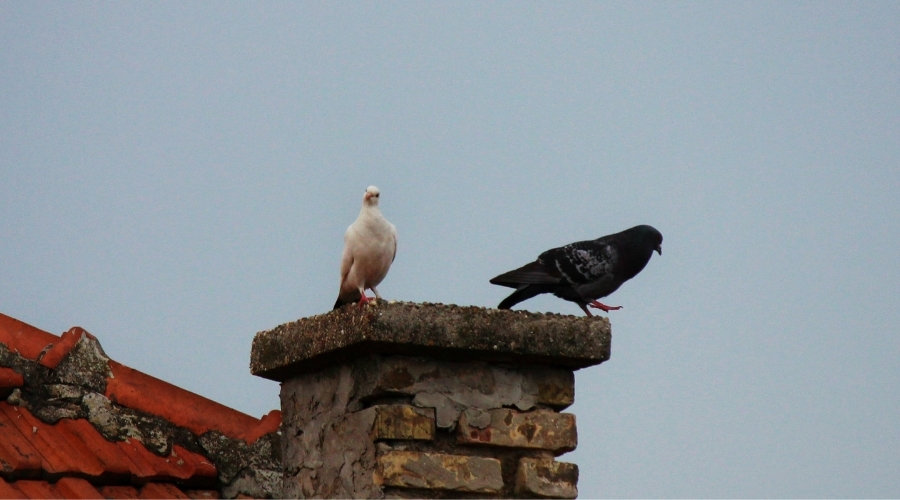 No one likes to think about suffering animals, but birds get stuck in chimneys all the time. While some species like ducks and starlings are fond of building homes in these enclosed spaces, others, like owls, cannot escape.

I will walk you through everything you need to know about how long a bird that’s stuck in your chimney may take to die and what happens afterward.

A bird stuck in a chimney will die of starvation or dehydration in 2 days to 3 weeks, depending on the species of bird. Small birds have smaller stomachs and will usually die within 2 – 5 days however pigeons can last up to 3 weeks without water. Factors like injury, species, and how much energy the bird spends struggling to escape will impact the time frame significantly.

How Long For Bird To Die In Chimney

Some birds will struggle for a while and then right themselves only to emerge from a chimney safely. However, when a bird is stuck in your chimney, and you cannot help it, it’s only natural to wonder how long it will take to die. Unfortunately, it will probably be a while.

Smaller birds can only survive two or maybe three days. While they are more likely to escape because they have a smaller wingspan, they also have a smaller stomach.

Food and water are the fuel that keeps all animals going and having a tiny fuel tank is a disadvantage in a trap. Unlike domestic chickens and turkeys, a tiny wild bird probably has little to no fat reserves.

A hummingbird would die the quickest if it broke a wing on the way down a chimney. These tiny nectar gulping bullets can die in just three to five hours. For any other species, it will be a long-drawn-out process.

Trapped birds will try to fly, and they may even attempt to climb out. They will struggle valiantly, though ultimately in vain, even if they have broken a wing or lost flight feathers.

Failing that, they may try calling out if they are near their nest. Sadly, for our little feathered friends, making a ruckus when you’re trapped is as likely to call a predator as it is to get a mate.

Smart birds like pigeons (yes, pigeons) may find seeds and other small crumbs to forage, especially if your chimney was home to a nest at some point in the recent past.

According to Pigeon Control Resource Centre, these often-disparaged birds are among the smartest in the world. Only a few species, such as parrots and corvids like crows, are smarter.

Additionally, pigeons are very hardy animals. As a result, a pigeon may take two or three weeks to die, longer if it rains to provide fresh water.

All animals need water far more urgently than food. A bird will die of dehydration in your chimney sooner than it will starve in most cases. It only takes two or three days for most small to mid-sized birds to pass away with nothing to drink.

The process isn’t instant. You will likely hear them fighting for their lives to fly away for hours. Smaller birds or those who were already thirsty will begin to weaken after a couple of hours.

Meanwhile, more hardy species and those who were lucky or unlucky enough to grab a drink on the way to their predicament may hold out for twenty hours.

Eventually, they will become too weak to struggle, which will not stop birds from crying out.

If you live in the desert, the story is a little different. Many desert birds get all their hydration from the food they eat. Technically, these birds can live a lifetime without water.

According to Bird Watchers Digest, some birds of prey, as they are more commonly called, also get their water from the meat they eat.

A well-fed bird, such as a family pet, will likely have more fat reserves to reabsorb. Similarly, a migrating bird probably stored as much food as it could for the long journey, which is great for distance flying but bad for being trapped in a dark hole as you wither away.

Migrating birds may have fat stores up to twenty percent of their body mass. The rest is all muscle, bone, feathers, and organs.

The Migration Ecology of Birds by Ian Newton discusses at length how birds trapped with no food, on oil rigs at sea, or during migration when they are forced to stop somewhere with inadequate food find themselves slowly dwindling away.

Over days or weeks, a bird’s body cannibalizes that fat layer with nothing to replenish them. Using stored fat as fuel is normal and healthy.

However, like other migratory birds, any bird in your chimney that has some fat to protect it will linger, using every resource it has to try and remain alive.

Regardless of how long it takes a bird stuck in a chimney to die, the problems only start there. Decomposition is a necessary and regrettably stinky process.

There are stages to decomposition that follow a predictable pattern. However, the length of time will vary a bit.

Environmental factors like moisture and heat affect the carcass. That said, once the chimney bird dies, it will take anywhere from thirty minutes to eight hours for rigor mortis to set in.

At this point, they are stiffened but not very decomposed.

When rigor mortis passes, the muscles become pliable again. By this stage, you can certainly smell the decomposition going on.

Additionally, the carcass may draw flies seeking a meal for their future maggots. Other insects like cockroaches and opportunistic feeders like rats may take an interest. Meanwhile, the chimney will stink.

The smell will linger for days to weeks, depending on how long it takes the corpse to dry fully. After that, desiccation of the remaining tissue will be slow in arid climates and faster in damp environments.

Ultimately, you will eventually be left with bird bones.

If you have an open chimney, you may be able to lure the poor trapped bird down to the opening with food.

Otherwise, there aren’t a lot of options for a bird stuck in a chimney. Here are a few helpful hints for dealing with dying birds stuck in your chimney.

No one wants to be in the sad situation of hearing a bird dying inside their chimney. Unfortunately, it will probably take a lot longer than you want it to.

Even then, the troubles are only beginning since decomposition, and lingering death-odors can last months in some cases. If you can help the bird safely, please consider doing so.

According to wildlife experts, bird attacks on people and pets are increasing. Yet, they also say these close encounters are nothing to be concerned about. As the owner of a dog who’s had...

Continue Reading
link to Are Birds Scared of Dogs