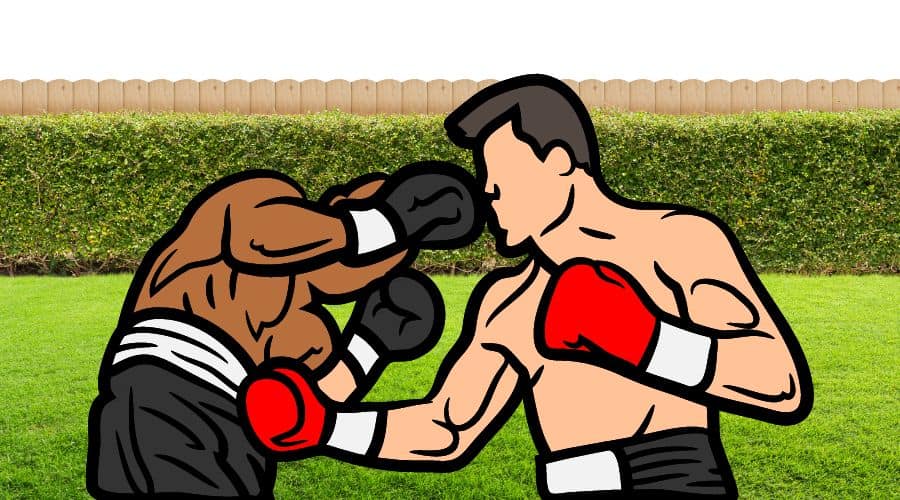 Backyard boxing is an umbrella term that covers several different activities, such as solo training with equipment, bare-knuckle bouts between friends, and casual matches with gloves and no prize.

However, any boxing that involves hitting another person, even with their consent, is governed by different legal rules. Is backyard boxing legal?

Read on, and I will explain where and how you can fight without getting in trouble and why most backyard boxing is, unfortunately, illegal.

Backyard boxing is illegal because fighting in public or on private property is illegal and everyone involved can be subject to the misdemeanor offense of affray, even if everyone has given their consent beforehand. Regulated boxing and training require licenses and boxing commission oversight that the typical home and backyard matches lack.

Is It Illegal To Have A Backyard Boxing Match

It is illegal to hold backyard boxing matches because non-professional boxing is still unlawful.

You can practice solo, shadowboxing, hitting light and heavy bags, or other inanimate objects to your heart’s content.

This would cause a problem if you somehow drew a loud, raucous crowd that was cheering for you and disturbing the peace, which is unlikely since you would not be hitting people.

To fight legally, you need a license, Passbook, and you must be at a licensed gym or venue.

Unfortunately, this also includes sparring matches. Because of the risk of injury, the regulations that permit fighting require a coach or referee present to stop the fight if necessary.

Is It Illegal To Box Your Friends

It is illegal to ‘just decide’ you are going to fight with your friends.

Unfortunately, despite their consent, hitting people for fun or profit is still hitting, and there are laws against assault, affray, and other bodily harm.

You can always join a boxing gym together if you want to have a few matches for entertainment purposes, but choosing to battle with fists, even in a private backyard or home, is still illegal.

There are relatively few states that allow bare-knuckle fights of any kind. The first state to legalize bare-knuckle boxing was Wyoming.

Moreover, it may surprise you to learn that WY only legalized the sport in 2018, and before that, no US law ever allowed boxing without gloves.

Boxing With Friends For Fun

If you want to box with friends for fun, you should all sign up for the same gym.

A properly licensed boxing gym can and will allow you to fight in the ring with rules. Not only can you do this with friends, but you could, in theory, also fight your enemies legally.

However, you both have to apply for the license and Passbook first.

According to Work Chron, to get a boxing license, “… you must pass a physical and apply for a license. Medical tests, such as an EKG, various neurological tests, and blood work, are often required. Also, you will need to submit to drug and steroid tests.” You would also need to prove that you are ‘of good moral character for professional boxing.’

Your Passbook is a record that keeps track of your fights and experience. In US boxing, you need this in addition to your license to show that you are following proper procedure.

Your Passbook also serves as a record of your fights, recording wins and losses.

Can I Host A Fight In My Backyard

You cannot host a fight in your backyard. It doesn’t matter whether it’s a boxing match, a street brawl, bare-knuckle sparring match, a home MMA fight, a ‘fight club,’ wrestling, or any other form of physical combat.

Any activity that is considered fighting, which also falls outside these laws, and is not held in a properly licensed venue, is illegal.

This includes all fights, from bar brawls to sibling rivalry.

Although the rules are not always strictly enforced, and not every conflict is reported, they are still illegal, and your backyard is not a licensed training gym or sporting arena.

To get a license to host fights in your yard, you need to form a business and become a licensed gym.

However, you would also need to build a licensable gym in your yard to do this.

Since most residential areas are not zoned for commercial businesses, your first step would be to find out how your yard is zoned and apply for re-zoning of the place where you want to build a gym.

Once you can build, you’ll need to hire a contractor and pay to put up the gym. After that, you will need to look into your state’s boxing commission regulations.

If your state has no boxing commission, you can still apply for oversight from a nearby state or the Association of Boxing Commissions.

I recommend starting here on the ABC Boxing website’s page about states with no commission policy.

How To Host A Boxing Event In Your Backyard

You cannot host a boxing event in your backyard. As covered in previous sections of this article, the only way to host any fighting event is to build and become licensed for an adequately constructed gym.

If you have the space and money to create your own private, licensed boxing gym, you can host fights there once you have all the permits.

However, by the time you have re-zoned and built everything, it has long since ceased to be your home backyard because it is a separate non-residential building.

If you are looking to put up a ring or some ropes and hit people or watch other people hit each other outdoors, you will be disappointed.

There is no way to get away with this that is still legal if you live in the USA.

Helpful Tips To Know About If Backyard Boxing Legal

Backyard boxing is not legal at all. Even if you’re just friends having fun and everyone involved consents, you still need a license and Passbook to box.

Here are a few more helpful tips to know about if backyard boxing is legal.

Sadly, backyard boxing matches aren’t legal, and they have never been. Having the right equipment, such as a ring and gloves, doesn’t matter.

Using bare knuckles, taped knuckles, or calling it something different like a Fight Club doesn’t change the fact that it’s not allowed, even on private property.

Suppose you and your friends or rivals want to hit each other with impunity. In that case, you have to get a boxing license for every participant and only hold your fights in the properly licensed and supervised gyms found throughout the country.

However, if you are sufficiently determined and have the necessary knowledge and funding, you can build or open a boxing gym and get a license to hold regulated fights and sparring matches there.

The only kind of boxing you can do in your yard legally is the solo kind with training equipment.

link to Rent A Backyard For A Party

Backyard parties have always been an excellent way to get together, but sometimes you don't have a yard, or yours isn't large enough for the gathering you need to plan. Luckily, there are many people...

Continue Reading
link to 10 Outdoor Games For A Small Backyard

One of the oldest 'yard games' is lawn bowling, which dates back to the Middle Ages. Naturally, people have been playing outdoors since before we had permanent housing, agriculture, or cities....