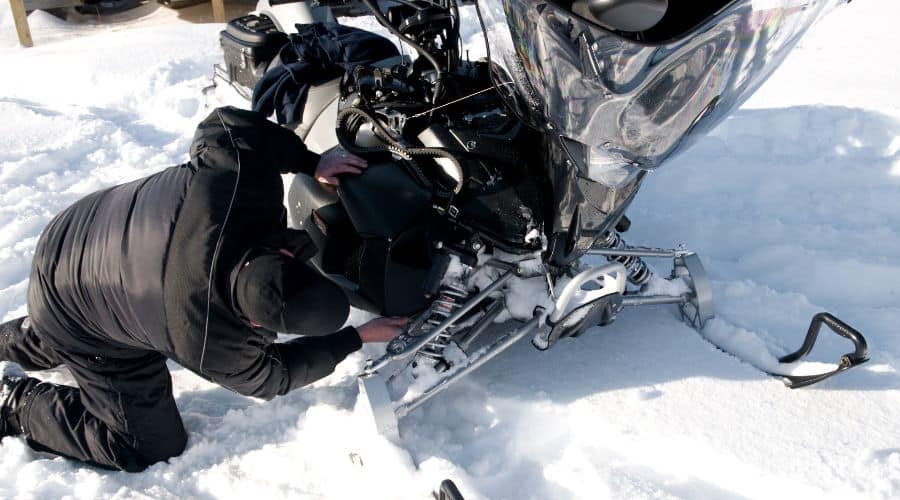 Modern snowmobiles typically have an oil light like a car to indicate when you’re low and need a refill. Paying attention to that light can help prevent seized engines and keep you riding all winter.

Keeping oil on hand can save you a lot of expensive repairs. How do you unseize a snowmobile engine? Read on, and I’ll teach you how to remedy this problem quickly at home so you can ride worry-free.

To unseize a snowmobile engine, you need a proper diagnosis of what caused the problem. Most of the time, it’s an issue of too little oil or oil not getting where it needs to go to lubricate the parts correctly. PB Blaster or Marvel Mystery Oil will help unlock stuck components if you leave it inside for a few days.

What Causes A Snowmobile Engine To Seize

The most common cause of a seized snowmobile engine is low or no oil, which happens if you forget to fill it or the belt breaks.

Without this vital fluid, the parts inside your engine rub together, causing friction, and creating heat. Overly hot engines can quickly become damaged and seize.

According to Jerry Gervais The Snowmobile Doctor, “Have someone tow it, don’t drive it anymore until it’s looked at because it could save you hundreds of dollars,”

Water or rust inside will also cause engines to seize. Additionally, sleds that have been in storage for a while sometimes become homes for mice.

In this case, you have to clean out the nests to get the engine working again.

How Do I Know If My Snowmobile Engine Is Seized

There are a lot of things that indicate a seized engine. Primarily, it doesn’t run.

However, engines stop running for other reasons as well, so I’ve compiled a list of other symptoms of a seized engine that can help you troubleshoot.

Your snowmobile engine may have any of these additional signs, but it won’t necessarily have all of them.

How To Unseize A Snowmobile Engine – (Step By Step Process)

The directions below are for unseizing a snowmobile engine with a lubrication issue or rust. If you have rust, you’ll need to replace parts as well.

However, it’s important to note that this is the most common but not the only thing that can cause an engine to seize.

Always make sure you diagnose the cause correctly before effecting a fix, or it will create a new problem.

Double-checking is still a good idea even if you’re ‘pretty sure’ your problem is a lack of oil.

Take a look under the hood to ensure your belt is in working order because a slipped or broken belt can lead to oil not moving through the engine.

If your belt is worn or out of place, fix that first, and your engine should run and move oil again.

You have plenty of options here. Transmission fluid mixed with gasoline or on its own and WD40 are both okay choices.

Marvel Mystery Oil and PB Blaster are among the best options.

However, Kerosene, diesel, heating oil, pretty much any form of petroleum with a water-thin viscosity will work.

Patience is more important than you might expect when trying to unseize a snowmobile engine.

Try to move it too soon or push too hard, and you will do additional damage.

Depending on how badly seized your snowmobile engine is, you need to wait anywhere from 3 days to 3 weeks for the lubricant to do its job correctly.

If the engine still doesn’t turn, some people recommend using kerosene on top of the pistons and lighting it on fire to warm things up.

However, I cannot suggest this course of action for safety and practical reasons. Instead, work indoors in a heated space and consider carefully pointing a small heater or heat gun at the pistons for a few minutes.

For this step, you will need a dowel of the exact same diameter as your pistons and a hammer.

Working on one at a time, place the dowel inside and gently (very gently) tap until it comes loose.

Tapping around the edges and not in the center is essential as that will put a hole in your pistons.

Once the pistons are freed up to move again, the engine should start. If this process does not work, you must take it to a professional for assessment and repairs.

Unfortunately, the lube-wait-tap process will not be enough to get things running again if your pistons melt from running too hot.

However, this fix will work on many seized engines when done correctly.

Pro Tip: Always do your scheduled maintenance and immediately clean or replace parts that show signs of rust and wear. Rusty parts scrape, and the corrosion eats the metal away. There’s no fix for missing metal.

Helpful Tips To Know About How To Unseize Snowmobile Engine

Many seized snowmobile engines can be remedied at home with a few tools and some basic understanding of what caused the problem in the first place.

Hopefully, your engine just needed some oil, and the process above was enough to fix it.

Here are more helpful tips to know about how to unseize a snowmobile engine.

Snowmobiles are essential for people in snowy regions, so a seized engine is no laughing matter.

If you suspect you are low on oil, please stop immediately and add more or have your sled towed.

An improper diagnosis can create more problems, so it’s essential to understand the cause before attempting to fix anything.

Fortunately, most of the time, the issue is oil not getting to the parts, and you can fix it with the right, high-quality lubricant and some patience.

Running the engine hot with too little oil will melt parts inside and lead to a costly replacement. Your check oil light is something you should never ignore.

link to How Does A Snowmobile Transmission Work

Picking the best snowmobile oil is essential to keep the engine running and operating at its highest performance. The wrong oil can cause disappointing consequences, sometimes in poor performance and...