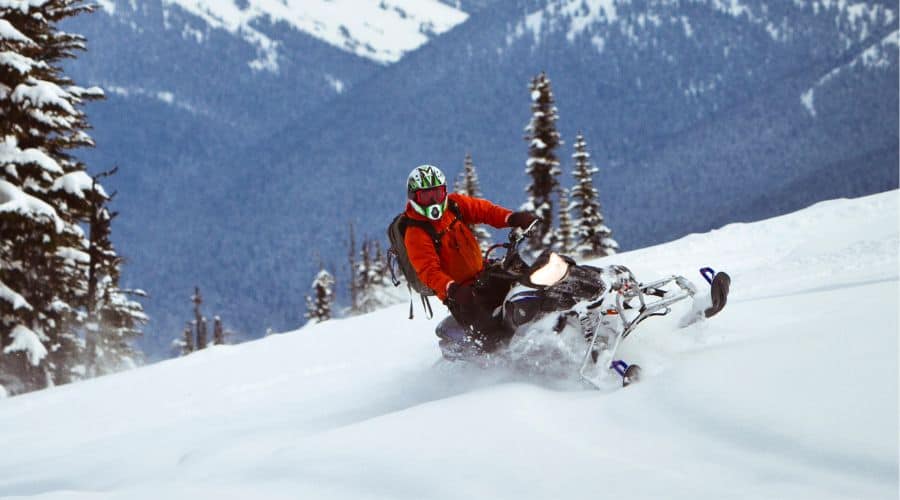 Snowmobiles have a CVT-style transmission that doesn’t use additional gears for shifting. As a result, the machine has a smooth, efficient ride and fewer parts to worry about. However, understanding your components is essential if something happens while you’re out riding.

How does a snowmobile transmission work? I will walk you through it so you can identify all the parts, troubleshoot, and learn to make your own repairs.

A snowmobile transmission takes power from the engine and moves it to the wheels using a pair of pulleys connected by a belt. The CVT or continuously variable transmission requires no additional gears and shifts itself seamlessly and automatically. The pulleys move the track driver as they spin, which makes the track advance and the snowmobile move forward.

Do Snowmobiles Have Transmissions

Snowmobiles do have transmissions. Unlike some systems that use gears and shifters, the CVT style uses two pulleys.

The primary pulley is adjustable, so it changes diameter automatically when you give it more gas or ease off.

This size change works the same as shifting gears to larger and smaller cogs, but without the need to move the belt laterally to another part.

Without a transmission, your snowmobile would not move. The transmission is just a fancy name for the series of parts that ‘transmits’ the energy from the engine into useful, functional motion.

The engine burns gas to make heat, which has to go somewhere, so it gets channeled into powering your transmission through controlled gaseous release, which turns the crankshaft.

How A Snowmobile Transmission Works

Learning about how your snowmobile transmission works can save you time, trouble, and money. It could even save your life in an emergency.

By understanding how each part works and relates to the components before and after it, you can teach yourself to troubleshoot.

Additionally, you’ll know what your mechanic is talking about if you have to take it into a shop for repairs or upgrades.

Snowmobiles are fully automatic. However, this is not a classic ‘automatic transmission’ like you find in a car.

Instead, this is a specific and highly efficient system known as a continuously variable transmission that moves itself through gear ratios by having a ‘gear’ or clutch which changes size smoothly to adapt based on the RPMs running at any given moment.

Every part of the transmission takes power from the one before it and uses it to move the components after it.

This is how you transfer energy from the power source (engine) to the wheels and track. All the parts are listed here in order of when they get power from the engine.

I will explain what they do and their relation to one another.

Only newer electronic snowmobile models have a reverse function.

These reversible snowmobiles are excellent for backing out of tight corners or even reversing out of a snowy parking spot. Luckily, you can get a kit to upgrade older models as well.

The reverse function quite literally turns every part of the transmission and drivetrain in the opposite or backward direction.

You achieve this by slowing down to an idle, then using the reverse switch to change the direction your tread moves.

You must slow to an idle and turn off the reverse mode to go forward again. Failing to do this will wear your engine components unnecessarily and cause long-term damage.

Why Do Snowmobiles Use CVT

Snowmobiles use CVT because it is the most efficient option. By using continuously variable transmission, your machine avoids problems that would occur by using a different system in this particular machine.

Additionally, the lack of added gears means the clutch can self-regulate the ratio, saving you on fuel and parts wear.

From a Redditor answering about why Snowmobiles don’t use the same system as motorcycles:

Snow gets everywhere, having a foot shifter would probably jam with snow. There is a lot more drag on snow compared wheel rolling on dirt. Unless you were really good, when you let off the power to shift you’d slow down too much (and) by the time you got the gear change done (you would) need to shift down again.

Helpful Tips To Know About How A Snowmobile Transmission Works

Every component of your snowmobile’s transmission is equally important. If even one fails, the whole thing will stop working, and your snowmobile won’t move.

Now that you understand the basics, here are a few more helpful tips to know about how a snowmobile transmission works.

It can seem daunting at first if you’re not familiar with how engines and transmissions work.

However, learning about how your snowmobile transmission works is an excellent place to start. The CVT or continuously variable transmission is both simple and efficient.

With no added gears, the automatic CVT can self-regulate gear ratios smoothly, saving fuel and reducing wear on the components.

Transmission parts collect energy from the engine by turning it into the rotation and moving it to the next part, powering them all down the line until it eventually turns the track.

This transfer happens incredibly fast, moving from the crankshaft through the clutches to the jackshaft and chain case and causing the track to spin almost instantly.

link to How A Snowmobile Clutch Works: (Explained)

A snowmobile has two different clutches that work together to transfer and regulate power from the engine, so it becomes energy to drive the track forward, and you move. Clutches are connected to the...