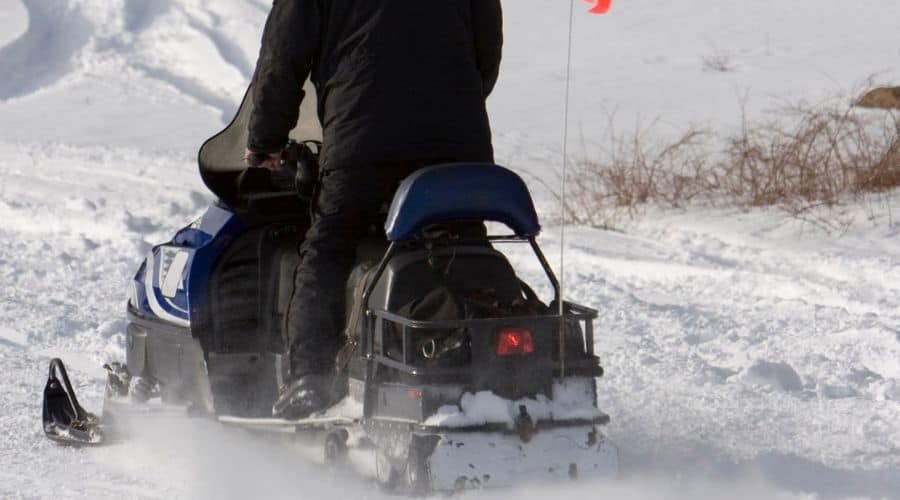 A backfire is a tiny explosion created after the fuel passes incorrectly through the engine where it’s meant to burn. Backfiring is a sign of problems you need to diagnose and address immediately. Excessive backfiring causes decreased fuel efficiency, power loss, and even costly engine damage if left unchecked.

Why does your snowmobile backfire? I will teach you everything you need to know to troubleshoot and fix those miniature blow-ups before it gets worse.

The main reason your snowmobile backfires is that the fuel-to-air ratio is incorrect. It is too rich when you have more fuel than necessary and too lean when there’s more air than you should have. When unbalanced fuel ratios combust improperly in the engine, some fuel won’t burn, and your exhaust burns instead, causing a backfire.

What Causes A Snowmobile To Backfire

Several things can go wrong to cause a snowmobile to backfire. Primarily these problems occur in mechanical parts involved in getting the fuel to mix with air, combust and then vent the exhaust.

The main reason is your fuel-to-air ratio, but I will explain all the possibilities below to help you troubleshoot and plan repairs.

For fuel to burn, it needs oxygen to feed the fire, but it’s not like a backyard bonfire. An engine with a precisely balanced mixture of fuel and air is essential for proper function.

With too little fuel, the engine won’t run correctly and may stop working. Too much fuel means some of it won’t burn up, which means you get a buildup of fuel along other parts of the engine like the tailpipe.

When enough heat combines with gas vapor that has unburnt fuel inside, or deposits of unburnt fuel on the machinery of your snowmobile, it ignites, causing a small but explosive reaction.

Hence, you get a backfire. Additionally, that unburnt fuel isn’t powering your sled, so you’re wasting gas and money in the process.

Pro Tip: Use the right fuel. There’s no good reason to put the wrong gas in your snowmobile. Most modern machines run on 87 octane, but some older models like high-performance and racing sleds may need 97 octane fuel to run correctly.

Ski-Doo’s Vehicle Information section points out, “Generally, you will not damage your sled by using readily-available automotive fuel as long as it is of at least 87-octane and does not contain more than 10% ethanol. Avoid using E-15 or E-85 as they will damage the engine of any recreational vehicle.”

Gas is the fuel for your snowmobile but sparkplugs, true to their name, provide the spark that ignites the fire.

This is an ongoing process that you must have for any fuel to burn, so a faulty, damaged, intermittent, rusty, or non-functional sparkplug will mess up the fuel burning process.

As the Team-BHP Forum explains, “Spark plugs don’t ONLY provide the initial spark, they continue all the time. If there was no spark plug, the fuel would never burn. Each time air-fuel enters the chamber, it is compressed, and then the spark plug ignites it.”

Damaged parts are always problematic, but carburetors have jets and screws that regulate the exact fuel-to-air ratio.

Over time the screws and jets move slightly, which changes that ratio and can cause backfiring.

When this happens, you need to take your sled to a professional. This is one fix I don’t recommend doing DIY unless you are familiar with engines and have all the proper tools and equipment.

Pro Tip: Your snowmobile should not run idle at more than 2000 RPMs. If it does, you need it jetted or adjusted so it can continue to do what it was designed for without causing backfiring.

Your catalytic converter has a chamber called a catalyst. Inside, this component works to split unsafe molecules and changes them into relatively safer emissions.

A bent or broken catalytic converter can vent exhaust inside the engine, or it won’t do anything at all.

When outside air gets in, the resulting fuel-to-air ratio is unbalanced, and the pressure is different, so the part can’t function properly.

Exhaust pipes are where the waste byproduct of burning fuel exits your sled.

This is essential because the exhaust can build up inside without a clear path, causing further damage and dangerously accumulating parts.

Your engine needs to continuously clear itself out to have space for more fuel and combustion, so as you’d imagine having anything that blocks up the exit is a very bad thing.

Animals like mice often choose idle engines as a home because they are sheltered from the elements and predators.

Plus, it’s warm there after you finish a ride. The same problem can happen if you damage your tailpipe, causing it to become closed off, or if someone pulls a dangerously childish prank.

You can use a small flashlight to inspect inside the exhaust pipe for any obstructions. You’ll need to clear it out immediately if you see signs of animal nests or other debris.

Some people use a stick for this, but I prefer a pair of long grill-style tongs for grabbing and removing debris from my exhaust pipe.

Pro Tip: Check your exhaust pipe first. Even though this is the most uncommon of the 5 leading causes, it is the easiest to diagnose. Ensure your snowmobile is turned off, so you’re not breathing exhaust before checking. Additionally, you may want to give it a few minutes before you check so the pipe itself is cooled off to avoid any accidental burns.

What To Do If Your Snowmobile Backfires

When your snowmobile backfires, it’s critical to take the right steps immediately. When you are near your home or a road, power down and get off the sled when it backfires.

Have a friend or professional come tow it home or to the shop. Instead of risking more damage, fix things right away.

Schedule regular maintenance in the future and don’t miss or put it off. Prevention and minimizing damage are the best option to avoid paying more for repairs.

How To Prevent My Snowmobile From Backfiring

You can do many things to help prevent a snowmobile from backfiring.

I’ve compiled a quick list of maintenance tasks and checks you can perform and listed how frequently you should do them to help lower the risk of backfire.

If you do everything on this list and the snowmobile still backfires, take it to a pro or trade up for a better-quality sled.

Helpful Tips To Know About Why My Snowmobile Backfires

Like a car, a backfiring snowmobile can sound like a gunshot, but the noise only warns that something inside your sled is wrong. You should never ignore strange sounds coming from your vehicle.

Whenever possible, pull over and tow it back to your garage or a professional immediately to avoid further damage and repairs.

Here are more helpful tips to know about why my snowmobile backfires.

When your snowmobile backfires, it makes a loud banging sound, which is beneficial. That loud cracking sound is a small explosion going off because something is wrong.

If your sled backfires, you should immediately stop and let it cool down. Check the tailpipe first in case it’s just some debris.

If it’s something more serious, you should tow it instead of riding it back to prevent further damage.

Use the list above to troubleshoot the most common causes of snowmobile backfiring, and you’ll be able to get it fixed and hit the trails again sooner.

link to How To Unseize Snowmobile Engine: (Complete Guide)

Modern snowmobiles typically have an oil light like a car to indicate when you're low and need a refill. Paying attention to that light can help prevent seized engines and keep you riding all winter....

Continue Reading
link to How Does A Snowmobile Transmission Work