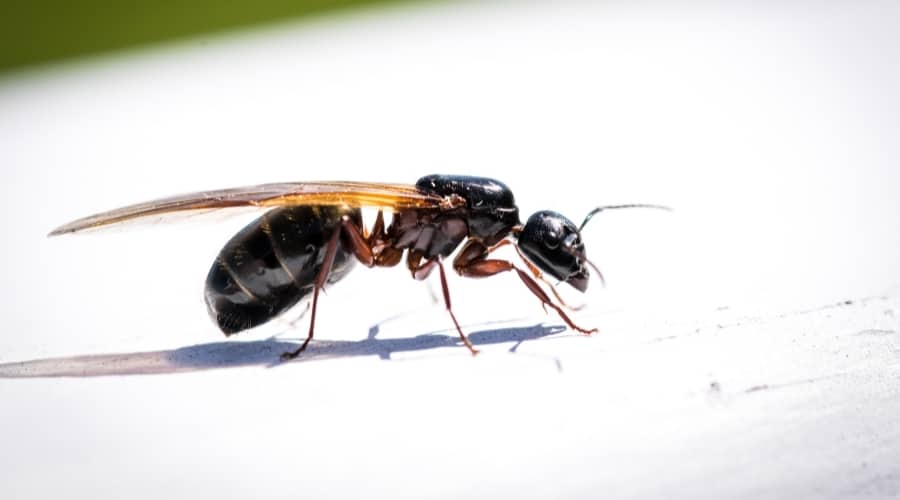 You’ll find flying ants in two places. The first is anywhere with open sweet containers from sugar to candy or even honey, and the second is under lights.

Are flying ants really attracted to light sources, or is it an illusion? Anything is easier to spot under lights, so I’ll clear up the confusion about winged ants and their propensity for swarming around electric bulbs.

Flying ants are attracted to light for its heat and it mimics sunlight which helps them navigate long paths and return home safely. You will often find swarms of flying ants around streetlights, home porch lights, and even windows. Although light isn’t the only thing that draws them, turning the light off will help disburse them to another nearby glow.

Ants and other insects have very different eyes from humans. They are composed of a series of interconnected lenses. As a result, ants are great at spotting movement, but they do not have great vision over distances.

Scientists believe ants use their eyes to sense sunlight. The sun helps them navigate long paths and return home safely. That light would be even more important if the ant is flying rather than following a scent trail on the ground.

Lightbulbs probably confuse the ants and muck up their sense of direction. Flying ants are drawn to the light they can see because, in nature, it would only be the sun, moon, or a reflection of either one that they’d perceive.

What Attracts Flying Ants To Light

Two things attract flying ants to light. The first and most obvious is the illumination itself. Secondly, most lights are a source of heat.

Although modern LEDs are often nearly cool to the touch, that won’t matter to the ants. They will expect to find heat where there is light. Even slight warmth is enough. Ants are cold-blooded, so they respond to the presence of any heat.

You only see flying ants in summer because the warm season is more conducive to ant activity. In winter, ants become sluggish. They retreat underground and hibernate, which is why you rarely see ant infestations in the colder seasons.

A brighter light is more likely to attract flying ants. Because ant vision is minimal, these sources are more easily perceived. Notably, ants do have a preference for lighting.

Not only ants but all insects are more attracted to LED lights. The theory is that the wavelength is easier to perceive.

Whether they are more sensitive to the wavelength, or it’s just that many LEDs closely mimic natural, full-spectrum light, you may want to swap out your bulbs for a few days.

However, flying ants have working eyes that help them navigate in flight, and after the breeding season ends when they drop their wings.

Flying ants are attracted to any light source, but lower lights are less attractive. Oddly, flying ants are not fully phototactic, meaning they do not always respond to light.

Certainly, they don’t use it underground in their tunnels since there’s no source for them.

There’s not much evidence to suggest that ants are picky about how bright lights are. If they can see the light, they will come to check it out.

Do Flying Ants Fly Around Lights

If you have ever seen ants during the nuptial season, you know that flying ants are attracted to the light. They will flutter around lights as it gets dark.

Most flying ants tend to come out in the late afternoon, but they don’t ‘go to bed’ when it gets dark.

In Tennessee and nearby areas, you may encounter flying carpenter ants. It is essential to discourage them away from your home.

Carpenter ants will burrow through the wood of your house and destabilize it. Though they don’t eat the wood like the similar-looking termite, flying carpenter ants can cause a lot of damage.

How Do You Get Rid Of Flying Ants Attracted To Light

Turning off the light is the simplest way to get rid of flying ants attracted to the light. Regrettably, this isn’t always possible.

Homes with large windows and no blinds may not be able to avoid spilling light that draws the ants in, so what else can you do?

First, understand that flying ants are not particularly dangerous. They can bite but are no more likely to do so than other species.

More importantly, they are not especially poisonous. Best of all, they rarely come into human homes.

If you see one or two ants, you can crush them or leave them alone. Ensure to check the surrounding area for outdoor ant infestations afterward as it could indicate the presence of a colony in the area. Ground colonies last a lot longer.

For ants in the air, you can opt for ant-killing spray. Alternately, you could set up light and water traps. By putting a source of light under a bowl of water, you can drown most ants.

Add a few drops of dish soap, as this will dehydrate the ants. You can use the same mix to spray ants without the toxic chemicals in most over-the-counter ant poisons.

Helpful Tips To Know About Flying Ants and Light

Flying ants don’t stick around for very long. Every year for a short period, the ants swarm out to begin creating new colonies. Although this is often called “Flying Ant Day,” it actually takes several days.

Below are a few tips about what the flying ants are doing around your lights and how to help keep them out of the house.

Flying ants are likely to seek out any source of light they can find. By turning off outside lights and covering up windows and sources of sugary food, you can prevent most flying ant swarms from coming near your home.

Although flying ants can see the light, they don’t see very well and cannot distinguish between sources. Fortunately, they will be gone in a few days so the queen can go to ground and start laying eggs for her new colony.

link to Do Ants Feel Pain

Like every other creature, ants endure when they are crushed, poisoned, caught, or killed in different ways. You step on ants assuming they can’t feel pain. But do they? Ants do not feel pain...