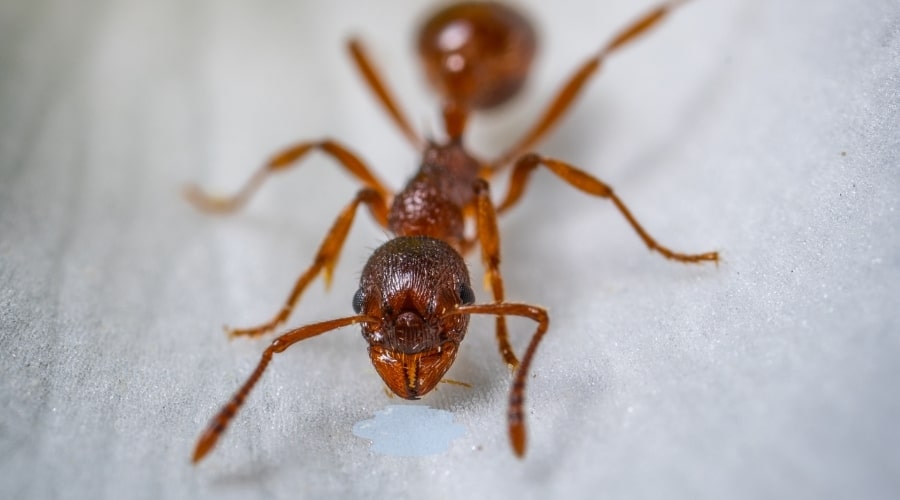 Ants have five times more odor receptors than other insects, so they are great at finding food. Beyond using this keen sense to talk to each other and follow odor-based trails home, an ant’s sense of smell leads it to food and even helps it find its fallen companions.

Ants are drawn to lots of scents, but are ants attracted to sweat? I’ll explain how and why sweat can draw ants’ attention.

Are Ants Attracted To Sweat

Ants are attracted to sweat. In human sweat there is bacteria, protein, salt, and sugar that ants are attracted to. Most ants seek the leftover salt crystalline from sweat when it evaporates because they often have trouble locating sufficient quantities of salt to nourish their cells. Ants need salt to maintain the proper balance of water, muscles responses and nerve activity.

Can Ants Be Attracted To Sweat

Sweat can attract ants to sweat. Human homes are the ideal place to find this necessary mineral. More than just our laundry, many of our foods also possess a plentiful source of salt.

Instead of carrying their salt, oxygen, and other nutrients through blood vessels, ants use a different system.

Inside their exoskeleton, they have organs and muscles, but their insides are filled with hemolymph instead of a vascular system. This blood-like liquid surrounds everything carrying the necessary salt to their cells.

Instead of the body odor, it is just the mineral content that ants want from our sweat. Disgustingly, they can also be attracted to urine for similar reasons.

Once these fluids dry, they are a source of food for nearby ant colonies. Keeping up on your laundry is the best way to avoid an infestation in your laundry room.

There is a type of BO that attracts ants, but it doesn’t come from humans. Instead, ants are attracted to the scents from other ants.

Not only is their incredible sense of smell attuned to finding food, but also each other. An ant can tell if another ant is from their colony, what its caste is, and even sniff out dead ants to move them to a sort of communal burial area.

This helps prevent bacterial infections in the colony from corpses.

Why Are Ants Attracted To Sweat

All creatures need salt. From elephants to tiny ants, this mineral is necessary for life on earth. Maintaining the proper balance of water is one reason ants need salt.

According to NBC News, ants who live further from the ocean are more likely to seek out salt. Since the salty water would provide plenty of the mineral, that makes perfect sense.

However, herbivorous ants are also more inclined to seek salt.

Ants who eat meat, the carnivores, often get all the salt they need through their diet. They are taking the salt, protein, and nutrients from their bodies instead of plants.

Since those bodies also needed salt to function, most will have some to offer. Meanwhile, for plants, salt can often be deadly.

Flora does not need salt to function. Moreover, with the rare exception of carnivorous plants like the well-known Venus flytrap, there’s nowhere a plant would get salt.

Are Ants Attracted To Human Sweat

Ants are attracted to human sweat for several reasons. First, you need to understand that ants are not particularly picky about where they get their resources.

They will invade any area that has something they need. Although many dead ants in the area or poisons may sometimes help to keep them away, typically, there’s not a lot that will stop determined ants unless it kills them.

Human sweat is a treasure trove of ‘stuff’ ants need and want. It may smell bad to us but sweat is a diverse platter of goodness for these tiny creatures.

Water is the main component of sweat. Ants drink water, but that’s not the only reason they like our sweat.

Human sweat has a small amount of ammonia, which can kill ants, but once it dries, ants can easily separate the salt and sugar they need.

Since we use our sweat to purge both salts and sugars, the ants can pick up the crystalline form of both by visiting our gym socks.

Are Ants Attracted To Diabetic Sweat

Ants aren’t particularly attracted to diabetic sweat. However, they are drawn to diabetic urine. In fact, before there were diabetes test strips, you could use these little sugar fiends to check for the condition.

Diabetes was recognized as far back as 1550 BC. An ancient Egyptian scroll details the symptoms accurately.

Meanwhile, around 6 AD, an Indian doctor named Charaka referred to Madhumeha or honey urine. A good way of checking for diabetes was to pee beside an anthill and see if they swarmed to get the sugars.

Are Ants Attracted To Sweaty Clothes

Ants are very attracted to sweaty clothes. In addition to the dry salt and sugars, ants often find other ‘tasty’ treats in our laundry. Urine can carry salt, but we also frequently get other foods and liquids on our garments.

From a spaghetti sauce stain to a few crumbs of bread, ants are super scavengers who can use it all. Laundry rooms are a smorgasbord for these tiny pests. Plus, it’s easy to get inside.

Ants have a natural advantage because of their diminutive size. However, most laundry rooms are less secure than other parts of the house.

Even if the laundry has no other outside access, these are usually more than sufficient for determined ants.

It pays to be careful when you are out in nature with sweaty clothing as well. While ants don’t generally attack something as large as a human, they may be willing to climb you to collect salt.

The scarcity makes it a valuable resource to a colony. Avoid sitting anywhere you see ants in summer. They are even more likely to need this vital mineral when it’s hot out.

Just like humans, they use up more energy and fuel when the weather is warmer.

Helpful Tips To Know About Ants Attracted To Sweat

Ants can get everything they need from a human home. Sweaty clothes provide water, sugar, and salt, while houseplants or your pantry offer lots of food.

Here are more helpful tips to know about ants attracted to sweat.

Ants are tenacious and creative scavengers. They will take food and salt from any available source. Human sweat offers several very desirable things ants need, including salt, sugar, urea, and water. Like sweat, urine also has a lot of the minerals ants desire.

However, it is a myth that ants like laundry detergent. If your clothes aren’t getting totally clean, then the remaining food and sweat is something ants can sniff out with their powerful noses, even if it’s too little for humans to detect.

link to Do Ants Eat Honey

Do you have an ant farm, or do you need to get rid of some ants that are taking over our home? Whatever the reason, the facts are the same. Ants are opportunistic and when scouter ants find a...

Whether you smash one with a finger or stomp a whole trail, killing ants has a distinct smell. People compare the stench to rotting coconut or spilled ink, but it serves a vital purpose in ant...