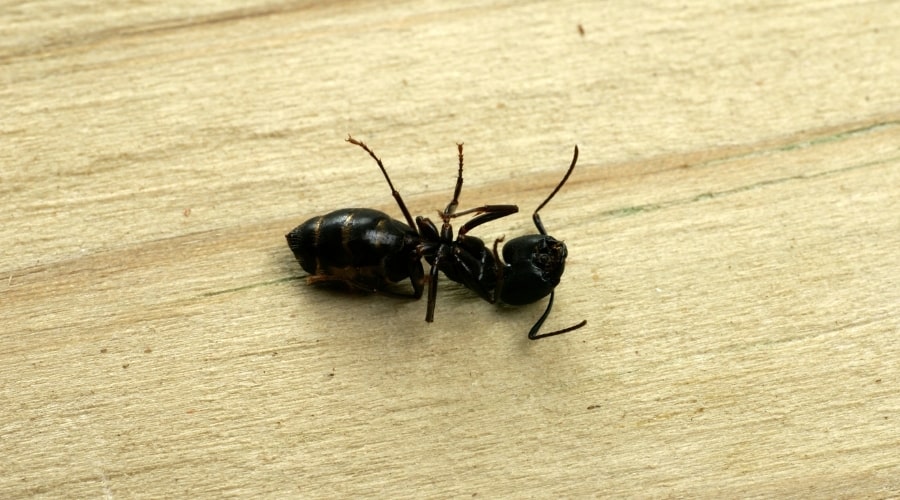 Like every other creature, ants endure when they are crushed, poisoned, caught, or killed in different ways. You step on ants assuming they can’t feel pain. But do they?

Ants do not feel pain because they do not have emotions which is an essential aspect of pain. Ants possess nociceptors which are sensory nerves that help them sense and avoid dangerous stimuli, however they don’t have pain receptors that allow them to feel irritating sensory and emotional experiences associated with real or possible tissue damage.

It is really fascinating that ants don’t exhibit behavior that shows evidence of feeling pain. This post will discuss whether or not ants feel pain in more detail.

Do Ants Feel Pain When You Step On Them

Scientists, animal rights activists, and biological ethicists have long debated whether or not ants feel pain. While there is no easy answer to this question, it has already been shown that insects, including ants, can sense dangerous stimuli and avoid them.

In 2003, scientists found that insects experience something similar to acute pain called nociception. According to Science Advances, nociception is the sense that allows animals to detect and escape potentially dangerous stimuli, like heat, cold, and physical injury that could affect their survival.

While this means that ant’s neurons can sense when you step on them, it is good to note that nociception is not pain.

Pain, according to the International Association for the Study of Pain (IASP), is an irritating sensory and emotional experience associated with real or possible tissue damage.

In essence, pain is an experience that can be explained in terms of damage caused, and the emotional component is the most important aspect of pain. When you step on an ant, you activate its nociceptors, which do not necessarily mean pain.

While stepping on an ant will cause irritation and damage, the truth is that the ant won’t feel any pain because ants do not suffer emotionally.

Entomologist have shown that stepping on ants would just inconvenience them rather than causing pain. This is because of their limited ability to sense damage.

Whether stepping on an ant leaves it with damaged feet or other physical damages, it will continue walking, or even run, without limping. This definitely shows that they do not detect physical damage, thus, do not feel pain.

Do Ants Feel Pain When Poisoned

Like other invertebrates, ants do not show behaviors that can be considered evidence of emotions.

Although they can respond vigorously to dangerous stimuli and move away from the harmful environment, they will continue with normal activity, including walking or running, when poisoned or sprayed with chemicals.

When poisoned, ants can continue with normal activity for some time but will definitely not feel any pain.

The extent to which they can continue behaving normally will depend on the amount of poison taken and its susceptibility to the poison.

Ants get nociception due to poisoning, but because they don’t have pain receptors, they will react to poisoning without demonstrating emotions that can be regarded as emotions.

Do Ants Feel Pain When They Fall

The pain that one feels after falling is usually due to the impact, which may hurt. To know whether ants feel pain when they fall, it is imperative first to understand if they get hurt after falling.

It is fascinating that ants barely get hurt when they fall. Indeed, ants have been shown to possess some awesome abilities like speed and the uncanny ability not to get hurt or die even after falling from high places.

Mainly, this is because gravity can’t pull them down faster, considering their insignificant weight.

Ants usually have a terminal speed of up to 3.9 mph, which is considered low to get hurt. In addition, because they’re tiny, gravity is immensely countered by the upward resistance.

Their outer skeleton is also capable of withstanding some impact when they hit the ground.

Considering that pain is proportional to the force exerted by the ground to bring the ant’s momentum down to zero, the insignificant weight of ants translates to almost no pain.

Even if ants had pain receptors, they would still not feel pain when they fall because the force due to their fall is negligible.

Whether an ant falls from high places or just a few centimeters off the ground, it doesn’t make any difference. The ant won’t be hurt and will not feel any pain.

Do Ants Feel Pain When You Squish Them

Pain is ultimately an emotional response, so the question of whether ants feel pain when you squish them returns to whether they have emotions.

Ants won’t feel any pain when you squish them. Although they react and run away, ants will not seem to respond to damage.

It is good to note that ants may suffer neuropathic pain when squished. This reaction are survival tactics not an indicator of pain.

All insects, including ants, are “hardwired” with pre-determined behavioral responses to external stimuli, but their minds are not developed to ruminate about the pain that dangerous stimuli would impose.

Because ants have a very short lifespan, squishing them will only keep them from doing things that are important to them, like mating and eating, but it doesn’t induce any pain. After all, they don’t have pain receptors.

Ants are easy to spot relative to other insects, thanks to their bent antennae. Science has already shown that insects can avoid injuries and sense most potential sources of danger and escape.

In an attempt to understand if ants can feel any pain, scientists have studied transient receptor potential (TRP) channels, and the most studied nociceptor is the Drosophila nociceptor TRPA1.

Here Are Tips To Know Whether or Not Ants Feel Pain

The theory going around shows ants sense and avoid damage but do not feel any pain. Scientists and researchers call this ability nociception.

Whether you step on ants, poison them, or squish them, odds are they won’t be hurt and they will continue with normal activity because they don’t feel pain.

link to Killing Rats With Salt

Death by salt. Sounds strange for rats, doesn't it? Chances are you have never thought about it that way until now. Studies show that about 14 million American homes are infested with these rodents,...