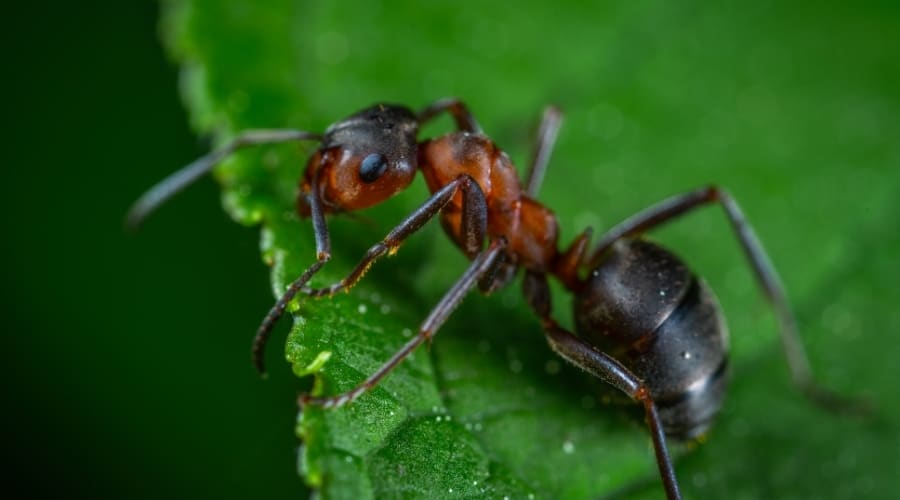 Whether you smash one with a finger or stomp a whole trail, killing ants has a distinct smell. People compare the stench to rotting coconut or spilled ink, but it serves a vital purpose in ant society.

Ant colonies can have thousands of workers who defend themselves and communicate to share information. I’ll explain how that smell helps ants.

When you kill ants, the smell is a defense mechanism which comes from a chemical compound known as methyl ketones. These chemicals are found in penicillin mold and blue cheese, which is why the odor might seem familiar. Since ants use pheromones to communicate, and they produce methyl ketones naturally, your stomp or squish releases a powerful stored-up bio-communication device.

Which Ants Smell When You Kill Them

In the United States, the most well-known smelly ant is the Tapinoma Sessile. Also known as the Odorous House Ant, these are the nasty little bugs that get into your kitchen every year seeking sugar and other foods they like.

When you kill these persistent ants, the smell is often compared to rotting coconut.

The Odorous House Ant also uses its stink for defense. Worker ants release a chemical that has a “pungent, cheesy odor when disturbed.”

Intriguingly, an ant who dies of natural causes can smell more like olive oil.

The oleic acid ants emit two days after death is not the same as the stinky crushed ant odor, but it serves the same purpose, to alert other ants that their body needs to go to the ‘ant morgue.’

Ants take their dead to designated areas to prevent bacteria.

Why Do Ants Smell When You Squish Them

In many species of ants, the strong smell you get when you kill them is actually part of their self-defense suite. In nature, you can be dangerous, or colorful which signals toxicity, or you can stink.

Many predators use their olfactory senses to find food.

When your nose is thousands or millions of times stronger than a human, a bad smell is much worse. Being stinky means, you’re not desirable as food.

Naturally, there are some creatures like anteaters, lizards, and bears who don’t mind. Without these ant-predators, they would be much more populous.

Why Do Ants Smell Like Ink When You Kill Them

Ants who smell like ink have formic acid inside their bodies. Humans use this acid as an antibacterial agent in livestock feed and as a preservative. However, it is also used for ink.

Specifically, Formic Acid is used for sintering inks. The process of sintering makes a powder into a solid without melting. Typically, this involves a lot of pressure and sometimes includes low heat.

Formic Acid is also known as Methanoic Acid, is a simple Carboxylic Acid the ants produce themselves. In addition to using it as a defense, ants can also weaponize formic acid for attacking.

Like a skunk, the acid can help upset predators, but ants can also use their acids to attack prey.

Ants are omnivores and opportunists. Some species, like leafcutters, cultivate mold or prefer vegetable matter, but they will still eat meat if they are hungry.

Why Do Ants Smell Like Chemicals When You Kill Them

Ants smell like chemicals when you kill them because they are leaking chemicals produced within their bodies. You can find a similar odor in rotting food as penicillin mold breaks it down.

While a single ant doesn’t have much of this odiferous fluid, it’s enough to bother even a human. Our noses aren’t exactly sensitive by the standards of the animal kingdom.

It doesn’t take much formic acid or methyl ketones to make a big stink. This concentrated potency is why it’s so effective for the ants as defense, attack, and a signal to others of their colony.

When you are tiny, it pays to create chemicals you don’t need in large quantities. Just as a baby scorpion has a more toxic sting, a small ant must use a concentrate to fight.

Larger ants have bigger pincers, and they can do more damage. Army ants are a great example of a bigger ant since they can get up to a half-inch long with huge mandibles.

They are rumored to eat much larger prey, and there’s anecdotal evidence that people could be on the menu, if only rarely.

Notably, there’s no information on this particular type being especially smelly if you crush it. There are two possible explanations for that.

First, army ants are nasty customers and will swarm if you mess with their colony. It’s possible that not many humans have crushed them, and those who have were in such pain afterward that they didn’t think about the smell.

Alternately, even at that size, ants are still fairly small. Army ants, like another famous large ant, the Bullet ant, may have put their evolutionary talent for chemical production into their venom.

Gasoline, like nail polish remover, is just another human interpretation of formic acid and methyl ketones. People aren’t great with their noses compared to many of our fellow inhabitants of the earth.

As a result, something a dog, cat, or ant can smell very distinctly and separate from other odors merely smells like whatever is vaguely similar to us.

Since humans interpret their surroundings through a filter of their personal experience, ants are more likely to smell like gasoline when you’re around that scent frequently.

The powerful odor of smashed ants that keeps them safe from some creatures is pleasant enough for others. Humans have been known to eat ants as a delicacy, but we cover them in honey or chocolate first.

Other creatures that eat ants use a different coating to prevent the acids and pincers from becoming problematic.

Anteaters use their sticky saliva to coat the ants they eat. Meanwhile, lizards use a special and very sticky mucus. Whatever you cover them in, as an ‘ant-ivore,’ it’s necessary to protect yourself against their bites.

Only a few animals like bears, Chimpanzees, and other primates risk getting bitten for a snack. It appears they are tougher and less bothered by these bites.

This means the formic acid isn’t strong enough to stink them out, and the and bites don’t pack enough toxicity to stop them.

Ants have an incredible sense of smell. Although they can also communicate through touch and sound, a large part of their ‘vocabulary’ is scent.

Here are a few helpful tips about how ants relate to odors.

The nasty scent that offends your nose when you kill ants isn’t revenge. In fact, it’s all the conversations that ant never had.

Whatever it resembles to your senses, that stink is part of a complex and ingenious system the ants evolved to help them become better foragers by working together.

These tiny creatures have found a fantastic though funky-smelling system that makes ant colonies highly successful.

link to Do Ants Feel Pain

Like every other creature, ants endure when they are crushed, poisoned, caught, or killed in different ways. You step on ants assuming they can’t feel pain. But do they? Ants do not feel pain...