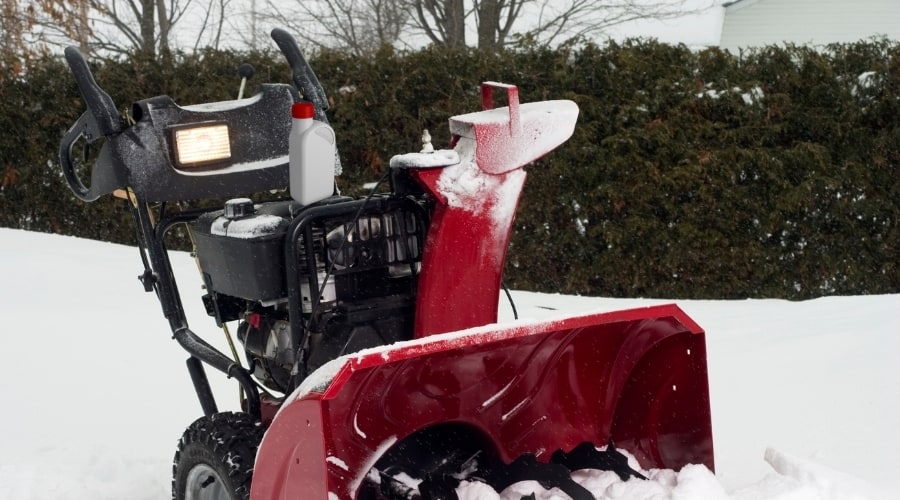 Cold weather tends to mess with fluids, and that includes oil. You’ll generally need SAE 5W-30 oil for snow blowers and other freezing season equipment. Like those found in many snow blowers, all two-stroke engines need an appropriate oil and gas mixture to run correctly.

Without both, the parts will rub together, creating friction and damage. Do new snow bowers come with oil? I’ll share everything I know so you can get your driveway clear faster.

New snow blowers do not come with oil and gas in the engine, however most models do come with a small courtesy bottle of oil from the manufacturer which is enough to mix one gallon of fuel for your snow blower.

When you open up a newly delivered snow blower, you should find a small bottle of oil. While no manufacturer is required to include this, it is generally an included courtesy. However, you won’t find gas included.

There’s no way to know how long from the time it is built and leaves the factory until someone buys each machine. Snow blowers need fresh gas, no more than thirty days old. It would be a waste to include it.

More importantly, some people who lack knowledge about gas would try and put it in their machines. Since those new snow blowers are usually still under warranty, it would cost companies a lot of money to send out bad gas.

Ariens snow blowers are arguably the best on the market. As such, you can expect to find incredibly high-quality parts, a fantastic user manual, and everything you need to run your top-of-the-line new machine.

Ariens snow blowers come with a bottle of oil that you have to put in yourself.

Does Briggs And Stratton Snow Blower Come With Oil

Briggs and Stratton is predominantly an engine manufacturing company, and it makes over fifteen million gas engines annually. You can expect a great machine from this fortune 1000 company.

However, Briggs and Stratton don’t usually include oil in their snow blower packages. Instead, they recommend you purchase it separately from the website.

Do Toro Snow Blowers Come With Oil In Them

Toro snow blowers are excellent mid-range machines with good quality MTD parts. Luckily, that means they are easy to find repairs and replacements for if you need them since MTD also makes several other well-known brands parts.

I could not find any information indicating whether Toro includes oil in its new snow blower packaging. It’s safe to assume they would since most do, but you should grab a bottle or two anyhow, to be sure.

Like Toro snow blowers, which also come from MTD, there is no indication whether the beloved Craftsman brand includes complimentary oil with new snow blowers.

The Craftsman website specifically recommends 5W-30 oil. Unfortunately, it’s anyone’s guess whether the usual small oil bottle will be in the box if you buy new. I suggest grabbing some oil in case you need it.

Do Snow Blowers Come With Oil In Them

It wouldn’t make sense to ship snow blowers with liquids inside them. As the machines move, they will get jolted around by forklifts, long haul trucks, and even the factory line that makes them, which would lead to sloshing.

Gas and oil can get onto the sparkplug or leak into other areas like the air filter causing clogs and other issues.

Instead of placing oil inside the machines, many companies include a small bottle of this essential fluid with the snowblowers.

You are less likely to get this if you buy from a big-box store or major home improvement center where the models are outside the original box. Order from Amazon instead to get the complete package.

Do All Snow Blowers Need Oil

While there is no such thing as dedicated snow blower oil, a good wintertime oil like SAE 5W-30 is usually necessary for your machine to run correctly. All gas snow blowers need oil.

Plus, it’s a good idea to add some fuel stabilizer into the mix to prevent gumming and clogging inside your carburetor.

No one wants their fuel to separate. Adding oil in the proper proportions will not prevent this process. However, you can make sure you fill the tank completely to reduce the space inside where air and moisture collect.

There is a type of snowblower that doesn’t require oil. Or, more accurately, it doesn’t need fuel with oil mixed inside. Electric blowers don’t burn gas because they have batteries or cords as a power supply instead.

While these are generally a little less powerful, they are better for the environment, and you don’t need to worry about oil.

What Type Of Oil Does A New Snow Blower Come With

Most snowblowers come with a conventional 5W-30 oil to mix with your fuel so you can get started right out of the package instead of needing a second trip to the store. It’s good marketing.

However, it would be best to consider switching to synthetic oil as soon as you use up the first batch. Doing this will help your snow blower run smoother.

Conventional oil is also known as mineral oil, and while it works well enough, it is not as smooth as the synthetic type.

As Mobil points out, conventional oils are less chemically stable, oxidize and acidify more quickly, and they are quick to break down and lose protective qualities.

Getting a new snowblower is exciting, and it would be disappointing if you couldn’t use it right away. As a result, gas blower companies usually include enough conventional oil to make a gallon of mixed fuel for your new machine.

For most people, a snow blower is a necessity, not a luxury, which is why we need to use them right away. Innovative customer-minded companies know this and include a small quantity of lower quality, conventional winter weight oil so you can mix fuel immediately.

Of course, you could buy premixed fuel, but it will cost you more in the long run than simply integrating a fresh batch when you need it most.

Unless you are running an electric blower, you’ll need to have a supply of synthetic 5W-30 or whatever your snow blower’s manufacturer recommends.

link to Forgot To Drain Gas From Snowblower

You can recycle old fuel at many gas stations. Unfortunately, you may not be able to use it in your snowblower because it can gum up your carburetor. Worst case scenario, you might have to replace...

Continue Reading
link to Are Snowblower Keys All The Same

In the 1800s, a snowblower attachment was created for trains because the wedge-shaped piece on their front could get bogged down in deep snow and derail the train. Naturally, these large...