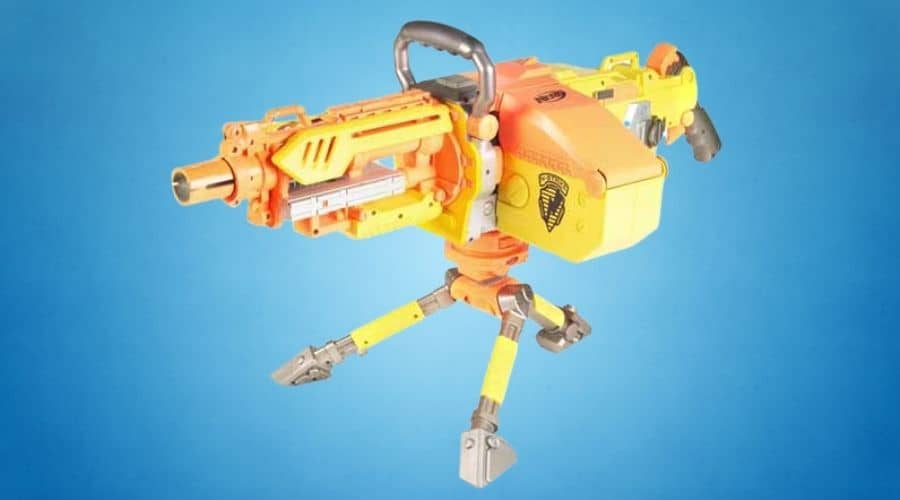 Nerf was founded in 1969 as a toy weapon company. It has put out a lot of outstanding guns in more than five decades since then.

From the first Lonnie Johnson Supersoaker in 1989 to the not-yet-released 2022 Needler and Boba Fett’s EE-3 Blaster, there are so many fantastic options it can be overwhelming at times. What is the best Nerf gun in the world?

The best nerf gun in the world is the original Lonnie Johnson Supersoaker because it’s the Nerf gun that started it all. However, the modern dart blasters are far less wasteful with reusable ammunition and features like engines and upgraded, more durable materials. Plus, having indoor and outdoor capabilities make the dart gun styles a more practical and versatile choice.

Finding the best out of hundreds wasn’t easy, but I’ve curated this of the top five best Nerf guns in the world that you can get. Plus, there’s a bonus for the utterly incredible oversized fan builds as well.

1 – Biggest Nerf Gun In The World

The biggest commercial Nerf guns are three-plus feet long or heavy with wild accessories. While those are undoubtedly very cool, I wanted to share something extraordinary.

Nerf builds amazing blasters, but its fans take things to a whole new level with customization, and occasionally they decide to go big. Really big.

He succeeded. The 12 ft 6in or 3.81-meter blaster made it into the Guinness Book of World Records.

People have built oversize Nerf guns before. However, part of what sets this one apart is that it works! You can see it in action right here.

Sadly, you can’t buy an epic build like this in stores. However, Michael chose the N-Strike Elite Longshot CS-6 because it’s an excellent model. Though the CS-6 is discontinued, you can still get one while they’re in stock by clicking right here.

2 – Most Powerful Nerf Gun In The World

There are plenty of superb Nerf blasters with good range. Some even come with protective eyewear because they fire the ball-style ammunition fast enough that the company recommends protection.

Speed and distance mainly have to do with power, and the most powerful Nerf gun on the market is the Elite Titan CS-50.

The CS-50 is one of Nerf’s most high-end blasters, and it’s easy to see why with this much power. With a 50-dart drum and a shoulder strap, you’ll easily take down targets or opponents with this incredible blaster.

You can have the fully motorized CS-50 for your collection when you click here.

The Nerf Ultra Focus Motorized Blaster is exceptional for a number of reasons. Not only is this Nerf gun durable, but it is fully motorized. Moreover, the Ultra Focus only fires AccuStrike Ultra darts.

AccuStrike Ultra darts are the most accurate Nerf darts available, so you’ll have an easier time aiming and hitting your target.

This superb Nerf blaster has an integrated sight, removable stock, and clip storage. Plus, this Nerf gun is shipped in recyclable and sustainable packaging. To get a Nerf Ultra Focus Motorized Blaster click here. 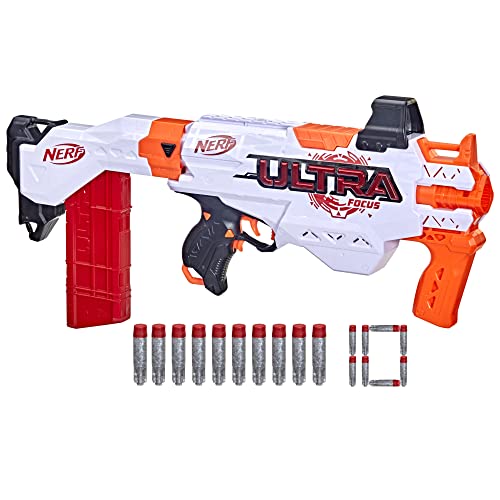 I’m stretching the definition here a little bit because this blaster is a unique style.

Nevertheless, I stand by it because the Power Moves Marvel Avengers Iron Man Repulsor Blast Gauntlet is the most excellent all ages (five and up) Nerf gun for kids.

Not only do they get to feel like a superhero, but it’s easy to use and aim.

The Power Moves Marvel Avengers Iron Man Repulsor Blast Gauntlet goes around your wrist. The palm piece looks like Iron Man’s blaster, and it can fire one dart at a time.

There’s storage for extra darts, and the simple pull-to-prime mechanism is easy enough for kids. Learn more about it on Amazon when you click right here. 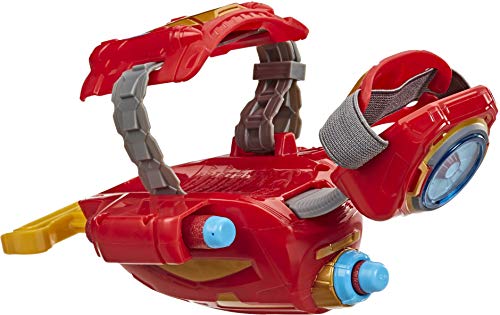 The Nerf Modulus Regulator is the best Nerf gun to mod out of the package. I love a good exclusive, but what makes it the best are all the options.

For one thing, there are three firing modes for this blaster, and for another, the swivel handle offers easy stabilization for better shots.

You get two scopes and two clips for a great view and plenty of darts. As part of the Modulus series, you can swap out parts and make this the easy custom Nerf blaster of your dreams.

Plus, you can get frustration-free packaging and start playing sooner. Find out more by clicking here.

If you’re looking for the latest Nerf tech, then the Halo Nerf LMTD Needler Dart-Firing Blaster is the one for you. This wildly futuristic-looking, spiky Nerf gun is one of many models slated to come out in 2022.

Inspired by Halo, this blaster is the future of Nerf warfare. Nerf will always make more standard-looking blasters, but you can now upgrade to firing darts from guns that look like aliens designed them.

Halo was a natural pairing for Nerf since these games are science-fiction and warfare-based. If you don’t already play, you can learn about Halo on their official site.

However, for fans, these Nerf guns are already highly coveted items. Although this incredibly epic looking blaster isn’t even out yet, you can pre-order and get yours in time for the holidays later this year by clicking here.

Complete Buyers Guide For The Best Nerf Gun In The World

Picking out the best Nerf gun in the world (for you) shouldn’t be as hard as it sounds.

Although what’s suitable for one person or situation doesn’t always suit the next, there are still some basic guidelines to follow that will help you get the creme of the crop.

Mostly, it’s about finding the ideal combination of what you need and immutable qualities.

The Nerf gun with the most extended range isn’t based on taste. However, deciding whether that’s what you need and want most is more personal. The list below will narrow it down.

One of the most extraordinary things about Nerf guns is that there are so many different cool features.

Some people prefer motorized blasters and others only want their Nerf with no batteries needed. Look at what matters most to you. Do you want customization options, more ammo, accuracy, or a specific size?

Don’t be afraid to spend the money to get what you truly want. After all, it’s not ‘the best’ if you settle for a cheaper version that only has some of the features you need.

Are you looking for an automatic Nerf gun that fires off fifty rounds in a few seconds, or do you prefer to get the high ground and take your time aiming a single shot?

Firing speed matters. Even among manual blasters, there’s a big difference between choosing a clip-fed model, a rotating barrel, and a manual loader that requires you to stop between every round.

Everyone plays their own way, and some people prefer to spray the whole area as fast as possible, while others want their Nerf gun to feel like a shotgun or a sniper rifle. Make your pick based on what you enjoy.

All Nerf guns are pretty durable. After all, the company didn’t rise to the top of the toy weapons industry by cutting corners.

However, there are still levels of durability to consider. For example, a more straightforward firing mechanism is less likely to jam and easier to clear.

You have to think about where and how you plan to play with your Nerf guns. Are you a backyard warrior who likes to tumble in the dirt and dive behind makeshift barricades?

Do you prefer to set up an indoor shooting gallery and aim every shot to hit the center of your target?

Another common-sense feature to look out for is whether the model you choose is collectible.

Some Nerf guns are so commonplace that there’s little chance they’ll ever be considered collectibles. That is important if you want to modify them or plan to play rough.

Speaking of modifications, knowing how adaptable and versatile your model of Nerf blaster is helps.

Not everyone wants a three-in-one that has optional accessories and rails, but for some, it’s indispensable. Having a custom or out-of-the-box modifiable nerf gun is a great way to get more bang for your buck and vary up the way you play.

There are a lot of elements that make up style. Some players want a classic blue, orange, and white Nerf style Nerf blaster that reminds the brand.

For others, it’s all about getting those dinosaur, zombie hunt, or video game-themed pieces to complete a specific collection.

Similarly, there are Nerf fans who only buy one colorway like the pink options, and others are looking for a type of Nerf guns like shotguns or sniper rifles.

Modders are on the lookout for that elusive ideal Nerf to mod out into their latest custom fantasy. The best Nerf gun in the world for you will always be the one you can’t resist because it suits your style perfectly.