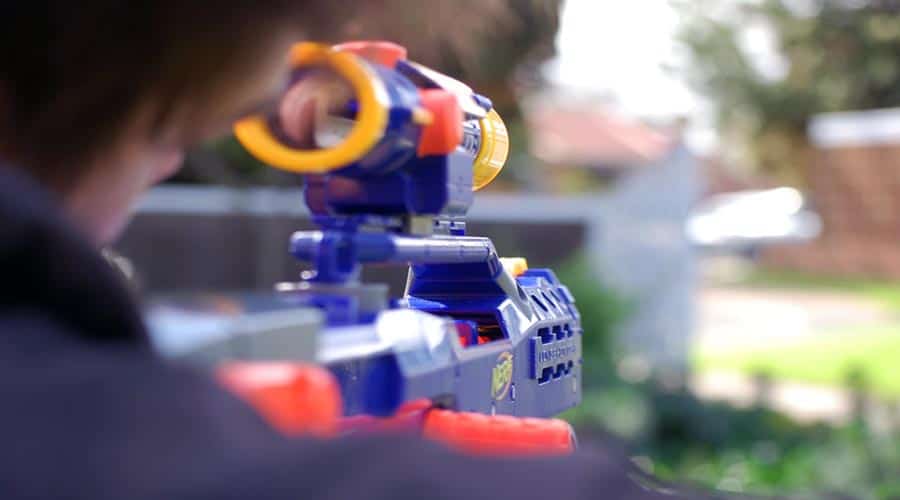 Semi automatic Nerf guns and blasters give you more control over the accuracy of your shots. You get power, precision, and distance. Sounds like the perfect combination for Nerf play. And we are here to help make sure you get the best.

There are so many Nerf guns on the market. Besides themes, designs, and shooting styles, you also have to choose between non automatic, semi automatic, and fully automatic. The decision can be a daunting one to make.

When it is time for a serious Nerf battle, you want to have the best semi automatic Nerf gun in your hands. With a semi auto blaster, you get more control over the accuracy of your shots.

The motorized feature makes them quicker and easier to use than non-automatic guns. Whether your opponents are near or far, you can reach the target every time.

Semi automatic Nerf guns give you the motorized firing of a fully automatic gun but are easier to handle. This means they are the best way to get great shots for younger players.

The piston of the gun is pulled back. This will be against the force of a spring. The piston is locked into place, holding potential energy. The chamber of the gun will now have a larger volume.

Pulling the trigger releases the piston and the spring pushes forward. In doing so, the chamber volume decreases, and pressure increases. This pressure is what propels any dart or sphere.

The semi automatic Nerf guns are less powerful than fully automatic options. Some work is required on behalf of the shooter. What this does mean is that you get more control.

Rather than spraying darts at high speed in all directions, semi automatic guns let you be more precise. You can rapidly fire at opponents, but you have control over the accuracy of your shots. The large spray of darts at once is however, very intimidating to your opponents.

Automatic guns remove the need for you to prime the weapon before firing, so are considered more convenient. You can press the trigger and release a dart. With semi automatic guns one dart is released per trigger pull as compared to multiple shots with a fully automatic gun.

With a fully automatic blaster you will fire more with less energy input. This may be better served when facing a large group of opponents.

The spray of darts will be more effective than taking your time to aim. The spray does mean you need to carry more magazines with you as you will release more darts.

With a semi-automatic blaster, you use darts more conservatively, so you don’t have to waste time collecting darts and have more time to target opponents. You also do not have to worry about carrying around the extra magazines which can weigh you down.

If you are interested in reaching long distances, make sure you look for a gun that is compatible with hollow tipped darts. You can also choose between standard darts, suction cup darts and spheres for ammo. Not all guns are compatible with these three types of ammo.

Gun size and weight matters when you are in battle. You can have a semi automatic gun that fires the most accurate shots, but if you are tired of lugging it around, the shots will end up missing their mark.

Most semi automatic Nerf guns will be similar in weight as they are all plastic. However, the more accessories you add, the heavier they will become.

Range or distance is everything in a Nerf battle. Firing from a distance is a tactical advantage and you will want to choose a gun that can cover distance.

Taking time to load or reload darts is time that you are a target. Outside of the agreed upon time out for collecting darts, if you are mid game, reloading is important.

You want to look at the reloading capacity and time for a Nerf gun before you buy. You can have all the ammo in the world but if your gun takes forever to load, then your opponents will get the upper hand.

There are so many Nerf guns on the market today. We have done the research and broken down the 10 best semi automatic Nerf guns.

The Nerf N-Strike Elite Stryfe Blaster on Amazon is one of the most popular and tactical semi automatic blasters from Nerf. This motorized handgun delivers 6 darts and has a lightweight design so works for most ages.

Because it works with every clip system, you can easily modify the gun to handle more darts. You will never have to worry about running out of ammo during battle. The Acceleration Trigger gets the motor going so your darts will fire far and exactly where you want them to go.

The Nerf N-Strike Elite SurgeFire on Amazon is the best choice for a semi automatic Nerf gun on a budget. Don’t worry, the lower price does not mean lower quality.

The surge of 15 darts from this blaster leaves your opponents with no choice. The drum rotates and releases dart after dart or all 15 rapidly at once. The pump-action gun launches darts further and faster and comes with Elite precision darts.

Another great option is the Nerf N-Strike Modulus ECS-10 Blaster on Amazon. Another customizable blaster that you can design to give you the ultimate advantage.

This easy to carry handgun comes with a dual rail barrel and targeting scope that instantly transforms your blaster into an assault rifle. Whichever way you carry this blaster, you can shoot up close or far away and darts will be on target every time.

There are over 30 possible design combinations you can create with various upgrades to keep you ahead of the game.

Besides these top 3 picks for semi automatic Nerf guns, there are many more out there. Depending on what you are looking for in terms of price, ease of operation, and style, these additional Nerf blasters are highly recommended.

The Nerf Desolator Doomlands Toy Blaster on Amazon is a stylish blaster that operates in a similar way to the Elite Stryfe mentioned earlier but features a larger clip and enhanced functionality.

Motorized blasting fires the 10 darts quickly and accurately and you get two tactical rails to add any accessories. The black and white coloring make it ideal for imaginary snow battles. There is also a clear section you can look through to see the mechanical actions of firing.

Be a Star Wars rebel with the Rogue One Nerf Captain Cassian Andor Deluxe Blaster on Amazon. The motorized system fires darts quickly and you get Elite GlowStrike darts.

Laser blast sound effects go off as you fire to make the action even more real. The glow-in -the-dark darts are one of a kind and unique to this blaster. Do not be fooled by the simple appearance of this blaster. The glowing, rapid-fire darts are anything but ordinary.

The Nerf N-Strike Elite Stockade Blaster on Amazon looks more like an assault rifle but world like a revolver style gun. It uses a cylinder instead of a magazine, so you can load from the front.

This works out in areas where you do not have time to search for ammo. Simply insert the darts into the rotating turret, aim and fire. This Nerf is sturdy and easy to hold, holds up to 10 darts and can fire up to 75 feet away.

Stay invisible or make a grand entrance with the Nerf Evader Modulus Light-Up Toy Blaster on Amazon. Made from clear plastic you can stay hidden behind the bushes.

And when it is time to make your presence known the lights will show the way. The motorized blaster comes with 12 darts and clip as well as demo batteries included.

The Evader is compatible with Elite darts which are designed for accuracy and distance and the barrel extension lights up when activated. And the bonus feature, since the durability of this gun is so great, it is environmentally friendly.

Take on your rivals with the Nerf Rival Charger MXX Blaster on Amazon and fire dozens of darts in a row from the powerful, motorized blaster.

The blaster comes with 24 rounds, 12 to load and 12 ready for backup. This high-powered blaster fires darts at 100 feet per second which will overwhelm any opponent.

You also get a single tactical rail and a safety switch on the barrel.

Take on zombies as well as opponents with the Revoltinator Nerf Zombie Strike Toy Blaster on Amazon. Sounds and lights make this a truly electrifying blaster and the motorized system fires up to 18 darts in a row.

No zombie can withstand that rapid-fire attack. 18 Nerf Zombie Strike arts are included, and they are designed with a hollow tip for maximum distance. Accessorize yourself with any of the many Nerf Zombie Strike kits to look the whole part.

Fire darts, missiles, or both with the Nerf Elite 2-in-1 Demolisher on Amazon. Whatever you launch it will travel as far as 90 feet and the motorized pump-action blaster gets your shots on target every time.

Complete with a 10-dart banana clip and detachable stock, you get integrated missile storage too. Having different ammo types makes games more fun especially when you get extra points for MEGA ammo.

With the Demolisher you get a powerful semi automatic and single shot back up all in one.

You have decided to get a semi automatic Nerf gun. Before you run out and grab one there are a few more helpful tips to make sure you get the right Nerf blaster for you.

Semi automatic Nerf guns are a great choice. More power and easier operation than a non-automatic and more control than a fully automatic. You get the best of the Nerf world.

Each of the blasters above are highly recommended and we have done our research. No matter what your budget, age of player, or style of play, we want you to have the best semi automatic Nerf guns.