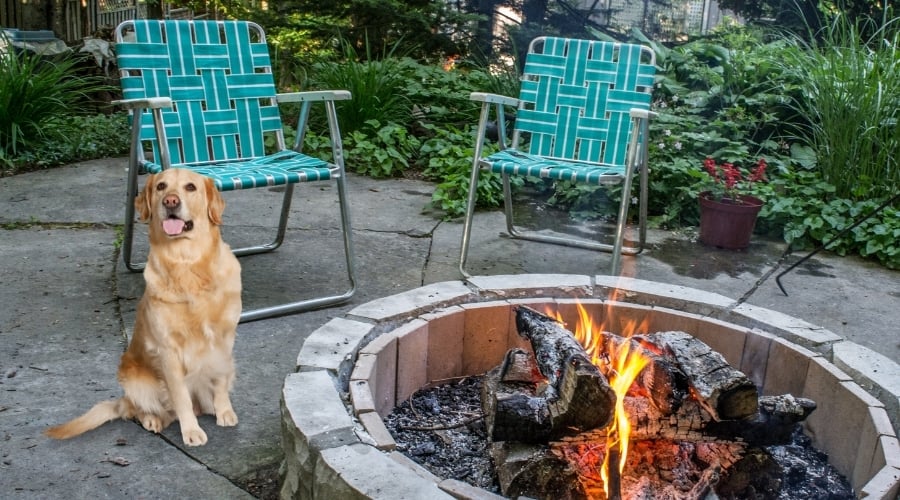 If you’re thinking about investing in a backyard fire pit and you have a pet dog, you’re probably wondering are fire pits safe for dogs.

With a staggering 500,000 domesticated animals sustaining injuries in house fires every year, it’s an issue homeowners should certainly consider.

Fortunately, only a small percentage of these incidents involve backyard fires and even fewer involve accidents relating to fire pits.

Dogs and Fire Pits – Is It Ever Worth The Risk

There’s nothing inherently dangerous about allowing a dog around a controlled fire pit. Dogs recognize fire as an environmental obstacle and their innate survival instinct warns them to avoid it. When accidents do occur, it’s usually because a pet has gotten over-excited and momentarily forgotten the danger.

I’ve seen plenty of dogs play safely in gardens with active fire pits, so I believe it’s safe. However, only you can give an honest judgment about whether your dog is well behaved enough to remain calm and avoid getting too boisterous.

The danger is not that your pet will jump into a fire because they don’t realize it’s hazardous. It’s more likely they’ll become distracted and forget the danger.

Let’s discuss some concerns you might have as a dog owner and whether these are good reasons not to buy a fire pit.

It really depends on your dog’s personality. Some dogs have a deep and instinctual aversion to fire and don’t need any training to understand they should steer well clear.

Other canines will sit a little too close or zoom around a fire pit because they don’t understand the correlation between risk and proximity. The majority of these animals can be trained to behave more safely when a fire is lit.

A small proportion of dogs will be completely unsuited to backyards with fire pits. If you have any doubts about your dog responding to firm commands, it’s probably best not to risk their safety by allowing them around a lit fire pit.

Your pet must understand it’s time to stop playing when they hear your serious voice. If you believe your dog will listen to critical commands, I see no reason they can’t enjoy the warmth with you.

Here are some vitally important ways to ensure your dog stays safe from fire pit:

Is A Propane Fire Pit Safe For Dogs

If your dog is too boisterous to be around a wood-burning pit, they’re too boisterous for a propane fire pit as well. The flames will hurt the same whether they’re wood or gas-fueled because any differences in heat output are negligible.

However, propane fire pits are a little safer because they give a user more control over the intensity and size of the flames.

Most gas fire pits come with a variable valve that can be adjusted to make the flames smaller within a few seconds. With a wood pit, the only way to reduce intensity and heat output is to wait.

Plus, there’s the advantage of not having hot coals and embers lying around during or after a fire. Propane fire pits cool off much quicker, so they stay dangerous for less time.

And they produce no smoke which means fewer emissions and less air pollution in you and your dog’s atmosphere. For these reasons, propane pits are safer than wood pits, but they should still be treated with caution.

Is Campfire Smoke Bad For Dogs

So, you’re confident your dog will steer clear of the flames. What about the smoke from your campfire or backyard fire pit? Does the smoke from a wood burner pose a risk to your furry friend?

Again, it depends on a variety of factors, and these are largely the same as the ones which can affect us.

If you don’t feel comfortable sitting in the smokiest spot, don’t allow your canine to settle or sleep in that area. If they’re going to settle, make sure it’s upwind so flames and ashes are blowing away from them and their smoke inhalation is minimized.

In small amounts, a smoky fire is unlikely to cause harm to a dog but too much smoke will damage their lungs. The golden rule is if it’s bad for you, it’s also bad for your pet.

Here are some things to do to minimize the risks of smoke inhalation:

Do Dogs Know To Stay Away From Fire

Just like people, the majority of dogs have an innate understanding that fire is a hazard and shouldn’t be touched. This primal instinct is common to almost all mammals though you’re always going to get some pets that are a little more reckless or foolish than others. Just like people.

Dogs are wary of fire for the same reasons we are. It’s hot, it’s unpredictable and their prehistoric panic systems tell them it’s a danger.

Some dogs won’t ever be comfortable sitting where they can see a fire and that’s perfectly okay. You should never force a fearful pet to spend time around a fire pit or campfire.

The risk comes with complacency. Again, this is the same for people as it is for dogs. We both understand fire is dangerous, but a sense of complacency can creep in when we learn that it’s controllable.

Some dogs get over comfortable after spending nights around the fire and lose their natural fear. They may fall asleep too close to the flames or stop stepping cautiously around a burning pit.

Keep an eye on your pet and intervene if they’re doing something that might put their health in jeopardy.

Why Does My Dog Bark At Fire

It’s quite common for dogs to bark at open flames in backyard fire pits and even indoor fireplaces. While it’s not unusual or anything to worry about on its own, provided your pet maintains a safe distance from the flames, it can be annoying.

It’s most often seen in young dogs who get overstimulated easily and it’s just a response to the brightness, noises and strange smells.

The quickest way to stop a pet dog from barking at a fire is to remove them from the environment and allow them to calm down elsewhere.

Habituation can help so give them another chance to get acquainted with what a fire looks and smells like. In time, most dogs settle down and lose interest once they realize the flames aren’t going to advance on them or hide when they turn their back.

This behavior is just your dog figuring out what a fire can do and whether it’s a viable threat. Use the same training techniques as you would to teach a dog to come when called or sit on command.

The more obedient your pet, the easier it will be to keep them from exhibiting unwanted behaviors around a fire pit.

Do Dogs React To Smoke

Whether a dog reacts to smoke and what form this reaction takes will depend on its personality and temperament.

Unless a dog has issues with its olfactory system, it can definitely smell smoke but not all canines will respond to it. Pets that are already comfortable around and familiar with open flames are unlikely to have a strong response.

Dogs who are new to fire may bark at the sight of flames and become overstimulated by the smell of smoke. In some cases, they may try to alert an owner to what they perceive as a danger.

If your pet persistently whimpers, cowers or constantly tries to get your attention, remove them from the environment and take them elsewhere to calm down.

And don’t forget to give them plenty of strokes and love. Your furry pal is just trying to keep you safe after all.

There isn’t a clear yes or no answer to the question are fire pits safe for dogs. It depends. It depends on your willingness to be hypervigilant, on your dog’s personality and on the relationship you share with your pet.

Only you can decide whether or not it’s worth the risk because some dogs are cool with fire and others are not. Just like people.

If you’re planning to allow your dog around a backyard fire pit, here are some safety tips:

Hopefully, this article gives you the confidence to enjoy a backyard fire safely with your furry friend. As with most household dangers, the true risk comes from a combination of environmental and behavioral factors.

When we understand these, we can take steps to minimize the dangers.

link to How Do Electric Fire Pits Work

While researching the different types of fire pits to put in my backyard, I found myself wondering how do electric fire pits work. Though most of us are used to indoor igniters like electric...