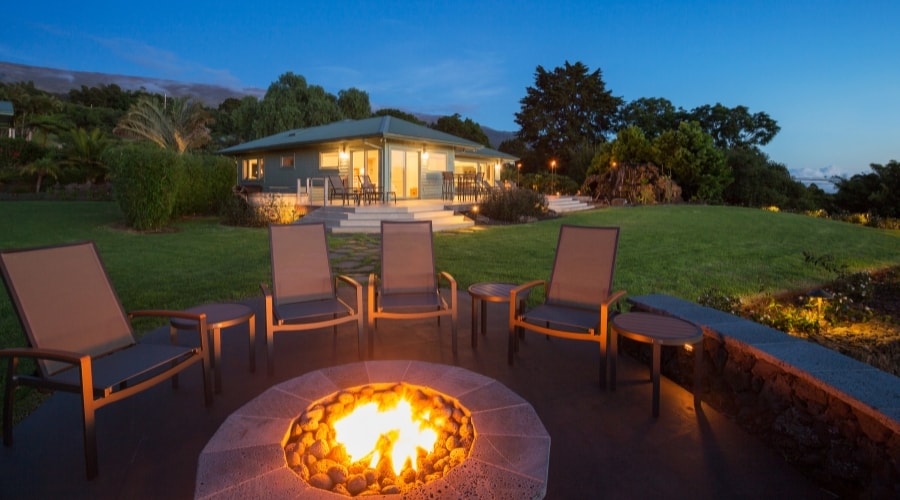 When the electric fire pit is switched on, an electric current gets directed to its surface igniter which heats up until it gets hot enough to ignite a pilot light. The pilot light then heats a thermocouple which converts the heat into an electrical charge that activates the main gas valve. Then the fire pit’s valve opens, and the fuel can then be ignited to produce the flames.

In this article, I’ll explain how electric fire pits work, what makes them different from traditional wood and gas burners and how they should be used for optimum performance.

It’s all about getting the energy in that initial electrical spark over to the gas valve so the ignitable fuel can be released.

How Does An Electric Fire Pit Work

The first thing to know is electric fire pits are safer than the more popular wood and gas alternatives. It’s because this type of igniter system has a built-in failsafe.

Instead of lighting a match and relinquishing control to the flames, with an electric pit, there’s a series of internal responses that need to happen for the fire to stay lit.

In the same way that a simple electrical circuit won’t work if its chain of responses gets disrupted, an electric fire pit is a controlled system that cuts the fire off automatically if any component malfunctions.

Fewer accidental fires are caused by electric fire pits for this very reason. But let’s dig a little deeper:

1 – The ON/OFF switch is toggled to turn the fire pit on.

3 – The surface ignitor heats up until it is hot enough to ignite a basic pilot light (similar to the ones used in electric stoves).

4 – The hot pilot light transfers heat to a thermocouple which converts the energy back into electricity.

5 – The electric current is used to activate the fire pit’s primary gas valve, instructing it to open and release the ignitable fuel.

6 – The burner ignites the free-flowing gas, and the flames appear. The entire ignition process should take a maximum of twenty seconds (but more usually around ten seconds) when operating correctly.

7 – If for any reason the flames get extinguished and unignited gas starts flowing, the thermocouple automatically shuts the main valve for safety reasons. Some of the most sophisticated electric pits can reignite the gas themselves or at least try to before switching the device off as a precautionary measure.

NOTE – Electric fire pits need some type of electric power source, but it doesn’t have to be a main supply. Some models come with integrated battery packs, and these are particularly useful if you can’t position your fire pit close to the house. The downside, over hooking an electric pit up to the main supply, is the fact you’ll need to replace the battery at some point.

How Do You Start An Electric Fire Pit

Assuming your electric fire pit is correctly hooked up to a power supply (if it doesn’t have a battery) and a gas line, starting it should be as simple as pressing a button.

Many contemporary models come with remote controls. All you’ve got to do is press the ON button just like you would with a television remote.

1 – Press the ON button on your remote control.

2 – The flames won’t spring up instantly. It can take as long as twenty seconds for the components to heat up and respond in the required manner. This is normal. You won’t be able to see it but the surface igniter will start to glow within 5 to 10 seconds.

4 – To turn the electric fire pit off, just push the OFF button on your remote control. This will instantly shut off the gas valve and extinguish the flames.

When they’re in operation, there’s very little difference between electric fire pits and the more common wood and gas alternatives.

All three types produce flames, so they have the same capacity to heat a space. The difference is in how those flames are generated.

Here are some more differences you might want to know about:

Does Electric Fire Pit Give Off Enough Heat

The fuel that burns hottest is wood. It’s true electric and natural gas pits don’t burn quite as hot. I’ve used all three types of fire pits though and, honestly, I think the environment has a more noticeable impact.

If one does feel significantly colder, it’s probably due to a feature of your surroundings. In optimal conditions, low wind, plenty of ventilation, ample fuel, the difference is negligible.

A warm fire is a warm fire. Plus, you have much more control over the heat output with an electric fire pit. Most electric igniters allow for variable levels of gas flow so users can control brightness, heat output and fuel consumption.

How To Increase Flame Height On An Electric Fire Pit

1 – Remove any decorative/heat-conducting rocks you have stacked around the fire pit’s gas valve (if relevant).

2 – Clean the area around the gas valve taking the time to remove any crud or debris. Make sure the fire pit is unplugged and switched off before you do this. It might help to use an air compressor to blow away any dust and built-up materials.

3 – Clean the electric ignitor in the same way taking care to check for obstructions around the cage and burner ring. If a fire pit hasn’t been used for a while, insects may enter its tubes. Spiders are notorious for leaving webs in burner tube holes.

4 – If the flame still isn’t big enough for your needs, try adjusting the flame adjustment valve. I strongly recommend you read the manufacturer’s instructions before doing this.

5 – Consider the features of your electric pit’s surroundings. Is it in a particularly windy area? Could you relocate it to a spot with more natural windbreaks? Sometimes, a lackluster fire pit just needs a more suitable location.

Where Can You Put an Electric Fire Pit

Safety guidance says all fire pits should be positioned a minimum distance of 10 feet from a house or other structure, and preferably around 20 feet.

The further a pit is from your home, the smaller the risk of accidental fires. While It’s true electric pits are significantly less likely to cause accidents, due to their fail-safe mechanism, they should still be treated with care and caution.

Here’s some advice on where to put your electric fire pit:

Electric fire pits are extremely easy to use so they’re ideal for homeowners who have no experience with traditional wood burners.

They’re more environmentally friendly than wood-burning fire pits and much less disruptive. If you want to enjoy a hearty fire of an evening but don’t want to disrupt your neighbors, an electric model is a great choice.

Here are some helpful things to remember:

There’s something about wood burning pits that inflames the imagination and electric pits cannot replicate it, I confess.

However, I think it’s more of a psychological attachment than anything to do with the technical capabilities of electric fire pits compared with wood pits. We’re just used to what we’re used to. And what we’re used to can change.

The environmental benefits of smokeless fire pits are such that we should all consider investing in this technology. Fewer emissions mean less air pollution and a much healthier atmosphere for our families and neighbors.

All of that and we don’t have to give up cozy nights around the fire. Some changes are worth stepping out of your comfort zone.

Continue Reading
link to Do Fire Pits Make You Smell

A fire pit is a great way to make your backyard more enjoyable, but it can also emit an unpleasant smell. The odor of smoke from the fire pit can linger for days after the event. A fire pit will...