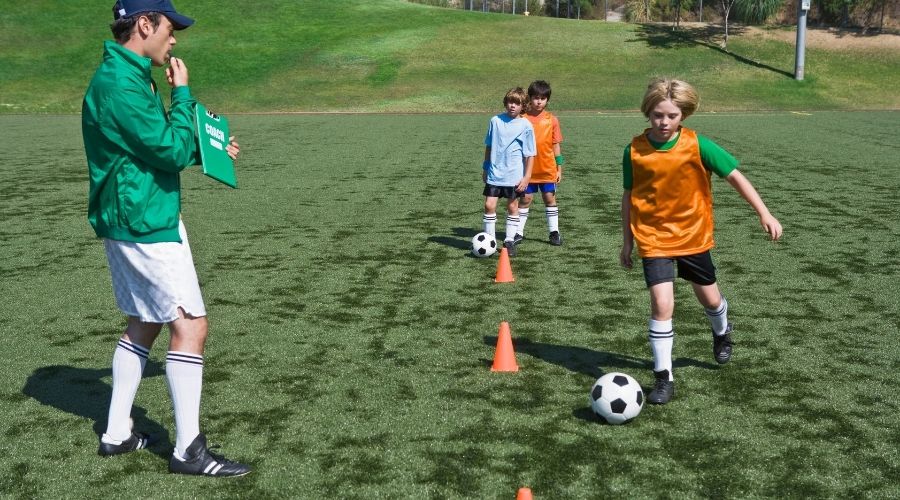 Whether you’re a seasoned pro or a first-time coach, soccer drills are essential for any team. Middle school players can do most exercises the adults do in practice, though you can’t expect them to be as proficient at them.

Still, they are more coordinated and capable than elementary school players. What is the best soccer drill for middle schoolers?

The best soccer drill for middle school students is the practice game because it combines all the other skills kids learn in a simulated game situation. Coaches can easily assess the way middle schoolers work together. Plus, it’s easy to see which kids need improvement and how best to help them with other practice drills tailored to their weaknesses.

The top 10 soccer drills for middle schoolers are designed to help kids master relevant skills like dribbling, endurance, and footwork.

There are plenty of options here to tackle different aspects of soccer. Every drill on this list should be part of a team’s training regime.

Tryouts are one of the most critical events in the season. What happens on tryout days will determine who makes the cut and the team’s structure.

Smart coaches will use these activities to gauge how much to use the other drills on this list based on where the teams’ strengths and weaknesses lie.

The Practice Game (5v5, 8v8, etc.) is a classic way to see how much middle school players already know and how well they work together.

This drill is a fantastic way to learn which players are most prepared and how they put their other, more specific exercises to use in game conditions.

Moreover, you can vary the teams if you have a lot of kids trying out.

Soccer is all about teamwork, and that means sharing the ball. It isn’t easy to share if you don’t have enough control to pass well.

This drill will show you how good the kids’ footwork is and how they work together 1 on 1.

The goal of soccer is to put the ball in the net. While that is an incredibly simplistic explanation, it is still valid.

Shooting drills are about moving the ball from the players into the net. This is where goalies and players really shine.

There are many ways to work on control, but one of the most important is finishing.

The final pass and finish allows 2 players to work together in a game-like setting. Using 1 goal and mannequins or cones, they learn to break through the defense and rely on others.

In this drill, pairs of players face off trying to score against one another. This is like the Practice Game but on a smaller scale.

The advantage of doing shooting goals this way is it allows a coach to pair players who need to improve their ability to work together and create more even skill matches to challenge middle school kids.

Accurate passing is essential. Regardless of a player’s skill level, practicing soccer passing drills is excellent for coordination and aim.

These drills not only help a team work together better to win games, but it also helps with shooting because it improves ball control and footwork.

This drill helps players move soccer balls back and forth over long distances. The players work in pairs and learn to communicate while they pass. Plus, it helps improve the aim when passing and receiving.

Alternate Version: Have players pass diagonally, aiming to stay within the boxes but passing along diagonal lines to their teammates.

This exercise helps players improve their skills while moving to meet the ball, just as the name says.

Groups of 3 players work with 2 balls and play a ‘monkey in the middle’ style game where the center player catches and returns balls alternating between the 2 teammates on the outside.

Defenders are the players on the back third of the field near the goal.

Practicing good defense will help middle school soccer players stop their opponents from scoring. It’s easier to win if the other team never reaches your goal.

In this activity, 2 rows of attackers and defenders run parallel to the goal. At the midpoint, the attackers turn to try and score.

Players work on their dribbling and footwork, plus some shooting techniques.

Alternate Version: You can easily set up both goals so players get more turns and their wait in line is shorter. You need 4 lines of players, 2 goalies, and 2 balls in this case.

This 1-on-1 game uses 3 ‘goals’ behind the defender made from cones set in a line.

Each gap between the cones is worth points, but the values are different depending on which goal an attacker scores.

Conditioning is all about getting fit, improving reflexes, and building endurance and muscle.

Unlike other soccer drills, conditioning doesn’t necessarily involve footwork, dribbling, or other soccer-related activities, though it can.

The most important part of conditioning is getting in shape to play, so this can include options like running laps or hitting the gym in some cases.

Below are the 2 best on-field conditioning activities for middle schoolers.

Some teams call these Doggies or Pain Shuttles.

Alternate Version: The Intermittent Yo-Yo variation has a short walk between some of the cones before running back. For a great visual aid on how this works, check out this video of the JSerra Catholic High School Boys Soccer Team at practice.

Three Triangles is another fantastic drill to practice quick movements and endurance.

In this exercise, 5 cones make 5 triangles between them, and all the players have to do is run from cone to cone.

At each cone, the player touches and then turns to move to the next until they have run all the sides of the 3 imaginary triangles formed by the cones.

Note: These are lots of very short sprints. Have players take turns starting and run through every player 2-3 times. You can always set up 2-3 courses, so players get more chances in a shorter period.

Helpful Tips To Know About Soccer Drills For Middle School

By the time they reach middle school, many young soccer hopefuls have already been playing for years.

However, even new players will be more coordinated and capable than the younger kids.

Here are more helpful tips to know about soccer drills for middle school.

Doing soccer drills for middle school is a lot of fun, and it can be very rewarding.

Both coaches and players should use this time to assess where they need the most improvement. You can never have enough drills.

Whether it’s practice games together, or smaller subgroups working on different aspects of play, there are plenty of ways to drill.

As long as everyone enjoys themselves and improves, you’re doing it right.

The original soccer balls were just bladders from sheep or pigs that children inflated. Then they tied them off like balloons. Kids played with these because they held air and were reasonably...