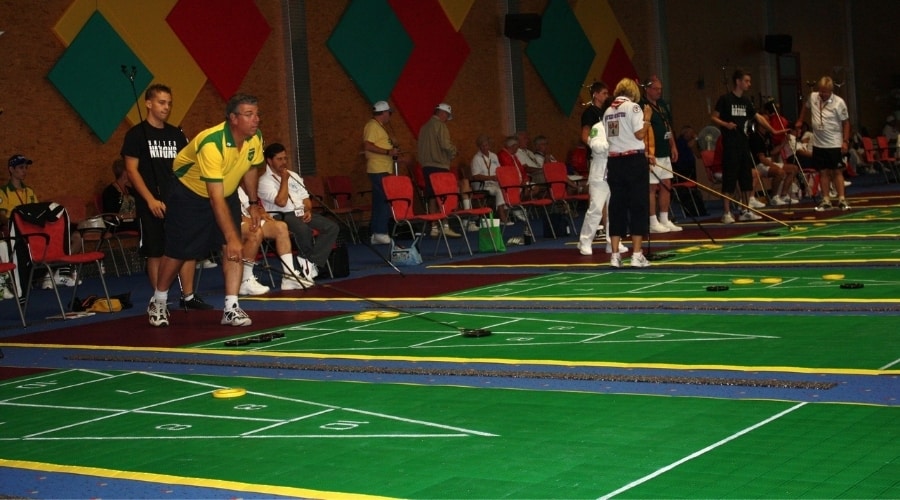 Shuffleboard has been around for hundreds of years and is a popular pastime. Played both indoors on a table and outdoors, this game is fun and easy to play. As with any other game, everyone wants to win, and understanding the scoring of shuffleboard is important. Especially since there are differences from the indoor and outdoor versions.

Understanding the basic rules of shuffleboard is important as they are related to the scoring. You can’t truly understand one without learning the other.

The rules of shuffleboard dictate when a disc can be counted for points and when it is not in play. Depending on where the disc lands on the board, a score between 7 and 10 points is awarded and tallied to reach a total game score. If a disc touches any of the scoring triangles and not entirely within it, 0 points is awarded for that disc. Your goal is to reach a predetermined score of either 50, 75, or 100 points to win.

Because location on the board determines your points, it is important to understand the rules of the game and how the scoring works. I have included a breakdown for you of how to score outdoor shuffleboard as well as tips on how to get higher scores.

When you know how to score, what your goal is, and strategies to beat your opponent, the game of shuffleboard becomes an exciting game you don’t want to miss out on.

Outdoor shuffleboard is played in half-rounds and scoring is relatively easy. Players take turns using the cue to push their colored discs from the 10-off section on the board.

The score is also determined by the position of your opponent’s discs, specifically their position relative to your discs.

General scoring for outdoor shuffleboard is as follows:

When all discs have been shuffled onto the board, points are tallied. Discs that do not reach the end or remain in the 10-off section are not counted. These discs can be removed from play. As you shuffle your discs towards the other end, you want to aim for higher scores while also trying to knock your opponent’s discs out of the way.

There can also be dead discs in the game. These are discs that stop in the area between the far deadline of the board and the starting area.

A dead disc can also be a disc that has struck another object other than a player’s disc and still remains on the board. All dead discs need to be removed from play.

In any case where a dead disc moves or displaces a live disc, the half round needs to be played over.

Not all discs that are played are going to earn points. Any disc that does not pass the foul line on the board does not count. It can be removed from the board. Discs that travel over the edge of the board can be pushed back onto the board, after all players agree that it is worth 4 points.

Every board has a 10-off area and any discs shuffled beyond this are not included in scoring. discs that land on top of another disc after being shuffled are still in play.

In the event a disc lands close to a line, you must look at the disc from above to accurately determine if it is touching or not. If it is on the line, the disc is not included in the score.

Discs are only counted if they have cleared the foul line, which usually sits in the idle of the board. Discs are not allowed to be touched until each round is completed.

The only exception is for ‘hanger’ discs that hang over the far edge of the board. Once agreed upon, these can be moved back onto the board fully.

Once points have been agreed upon for each round, players can collect their discs.

The penalties for shuffleboard include:

The regulation shuffleboard is 53 feet long and 6 feet wide. There are two large triangles marked out at each end, with the points facing to the middle of the board.

The larger triangles are divided up into sectors, each with a number assigned to them.

Scoring for outdoor shuffleboard occurs once all 8 discs (4 from each player) have been shuffled onto the board. Points are only awarded to discs of the same color that have traveled the furthest. The various points you can receive in shuffleboard are as follows:

Game play continues, with players or teams, until someone reaches 75 points. If both players or team of doubles have scored beyond 50 at the half-round point of the game, then the higher score of the two wins the game.

If there is a tie at this point, play one full round (or two for doubles) and the high score of that round determines the winner.

What Is The Winning Score In Shuffleboard

The players determine what the winning score will be before play starts. Shuffleboard games can be played to 50, 75, or 100 points. Typically, the first person, or team of doubles, to reach 75 points wins the game.

The game is played in half rounds and scores are tallied at the end of each half round. Scores cannot be counted until all 8 discs have been played.

Once a player reaches 75 points (of 50, or 100 if that was agreed upon), play continues for that half round. If the second player or team ends up reaching 75 points, the one with the highest score achieved during that half round is the winner.

Shuffleboard Scoring On The Line

Players will take turns sending their discs out onto the shuffleboard. The goal is to get your discs into as many of the scoring zones as possible.

Discs must be completely within a section in order to be counted towards the score. Discs touching a line do not count.

Do Points Cancel Out In Shuffleboard

Points are earned when discs land in a numbered section of the board Points do not cancel out in shuffleboard.

However, players are allowed to aim their shots towards another player’s discs. You want to do this to knock an opponent’s disc into a lower scoring zone or out of play completely.

This is more of a playing strategy than a part of the scoring guidelines.

Do You Have To Score Exactly 75 Points In Shuffleboard

These are much higher scores than those used in table shuffleboard, but the numbered sections on an outdoor board are worth more too.

These higher scores is also the reason that most games of outdoor shuffleboard are played in teams. Once this score is reached, the game is over.

What Happens If You Go Over In Shuffleboard

When it comes to going over in a shuffleboard game, there are two possible scenarios. One is going over the score. While there are options as to what the final score will be (either 50, 75, or 100) this is the score that is needed to win.

Players cannot go over the decided score, so the winner will be the player or team that reaches exactly 50, 75, or 100.

The second option is a disc going over the edge of the board. This can occur both as a player shuffles their disc onto the board and by knocking another player’s disc.

There are special considerations for a disc that has gone over the edge of the board, which I will discuss in more detail in the following sections.

How Many Points Is A Hanger

A disc that is hanging over the edge of the board is called a ‘hanger’. This is typically worth 4 points.

Players can, however, agree to make a ‘hanger’ safe by punching it back onto the board. This is more of a courtesy than a rule, and players must agree to this before the disc is touched.

Can You Bust In Shuffleboard

No, you cannot go bust on a shuffleboard. This is because of the way the game is scored. There is never a reason to go for less than points unless you are playing a variation of the game and non-standard scoring.

You will be playing for a predetermined score of either 50, 75, or 100 points and this is what you will work to achieve.

Scoring beads can be used to help the discs slide across the playing board. You can buy plastic, glass,or powdered beads and they all have the same purpose.

Typically, the beads you use will depend on the board you are playing upon. Plastic beads can be used for all surfaces. Glass beads are used on concrete boards. The glass materials are much slippier, so you do not want them to be used where people will be walking.

The score you are aiming for may seem high, but there are strategies you can employ to help you get a higher score. The higher you score in each round, the closer you get to the winning score.

Practice different shooting techniques so you are not doing the same shots over and over. You do not want to be predictable to your opponents.

You can learn spin shots, where the disc is spun to get into the right position, a knock-off shot, where you clear all discs from the board, or a stick shot, where you knock your opponent’s disc out of the way, sticking your disc in a great scoring spot.

Protect your discs if they are in high scoring areas on the board. Shuffle other discs to block these.

When your opponent plays their discs, any that come near that area will hit the ‘guarding’ disc leaving your high-scoring disc protected and in place.

Make sure you leave a small space between your two discs, so that when the blocking disc gets hit, it doesn’t also move your high-scoring disc out of the way too.

Scoring in shuffleboard is easy because the sections are numbered with the scores you can get. There are not always points awarded for every disc played, so it is important to play with a strategy. You also want to pay to get a high score each half round.

To do this, I recommend the following:

Scoring shuffleboard is a key component to you getting the win. You need to strategize to achieve the winning score, and this includes understanding how points are awarded.

With the possibility of discs being removed from play and the touching of lines disqualifying your discs, you need to think before you shuffle. With the tips and details in my guide, you can plan for the win, see the numbers you need, and shuffle your way to a victory.

link to How To Set Up Croquet: (6 & 9 Wicket Croquet Layouts)

Croquet is a popular backyard game and if you want to play, you need to know how to set up croquet courses. The layout can vary but the fun will always be the same.

Bocce Ball has been around for centuries and is easy and fun. It is a great game for family and friends and has proven physical and mental health benefits.