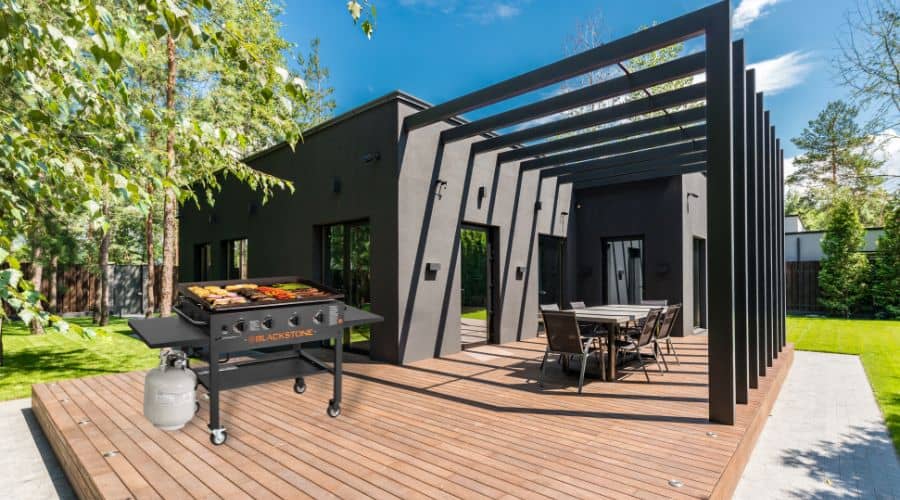 Blackstone grills are among the most popular flat-top grills in the United States and worldwide. When it comes to durability, these grills are unmatched, and they allow you to cook large food amounts at the same time.

But as a responsible buyer, it’s normal to wonder whether the griddles rust and what to do in case they do.

Blackstone griddles will rust due to moisture especially for people living in areas with high humidity and for those that don’t clean their grills regularly. Blackstone grills do have a protective coating that helps prevent rust, however, since they are made from cast iron, high acidic food, water and steam produced during cooking will cause corrosion.

Yes. Blackstone grills can rust. Remember that most grills are made of iron which is prone to rust.

Rust forms when iron reacts with water and oxygen, leaving a red oxide color. Sadly, rust is very common and irreversible in most cases.

The red oxide formed weakens the metal as it breaks down its molecules. As a result, your grill will break down quickly and become susceptible to other corrosion forms.

For this reason, you should get rid of rust on your Blackstone grill as promptly as you can.

Blackstone grills are generally designed to last longer and resist rust for as long as possible. Therefore, they can be used outside.

But, if you notice rust accumulating on the grills, it has probably come to the end of its life. The rust mostly comes from the grill getting old.

Therefore, it is not advisable to use such a grill as your food will not be healthy or delicious.

Why Is My Blackstone Grill Rusting

Rust can form on any metal. However, they mostly form on cast iron or carbon steel.

But, most manufacturers, including Blackstone grills, use cast iron due to its durability. Several things can lead to rust formation on your grill. But moisture is the main culprit.

Rusting is common for people living in areas with high moisture, like near a beach or in a place that receives a lot of humidity and morning due.

If you live in these locations, rust is likely to form on your Blackstone grill, especially if you usually live it outside.

Also, those who store their grills outdoors increase the risk of rust formation. If you keep your grill in your backyard or lawn, it can absorb humidity from the air and begin to rust.

But we should mention that Blackstone grills have a protective coating that helps prevent rust. However, since they are made from cast iron, they are still prone to rust.

Rust on Blackstone grills can also be caused by high acidic food like citrus fruit and tomatoes. When such foods come in contact with iron, it causes corrosion.

If you store your grill in the kitchen, high chances are that it’ll rust because of the water and steam produced during cooking.

Again, your Blackstone grill can rust when you do not clean it correctly or entirely.

Please remember that your grills should dry thoroughly to prevent rust formation and accumulation.

However, most times, these grills are left with water, which promotes rusting.

Is Rust On My Blackstone Grill Bad

Blackstone grills use cast iron cooking grates. But, while that makes the grill durable, it is also susceptible to rust.

So, it means that they will rust when you expose your grates for a long time. Unfortunately, rust is a no-no, so grill owners should do their best to prevent it as much as possible.

You shouldn’t grill on a rusted grate for various reasons. One is that the food won’t brown as it should and won’t be delicious.

The other is for the sake of your health and your loved ones. Please do not eat food made with a rusted grill as it can put your health at risk.

Remember that rust consists of iron oxide, which is harmful when consumed in large amounts.

Eating small amounts of iron oxides doesn’t seem to cause any health issues. For this reason, some people will grill their food on a rusty grate.

However, this should only be one-time. Too much iron oxide in your meals can be toxic, and you may experience iron poisoning.

Although you need to consume a large amount of rust to experience these symptoms, it’s still wise to avoid grilling on rusted iron grates.

But we should mention that food cooked with a rusty grill cannot cause tetanus, unlike what many believe.

Tetanus is not caused by rust but by bacteria called clostridium tetani which are mostly found in areas with rust, which causes the confusion.

However, since the grill has to be hot enough for food to cook, it’s unlikely that bacteria can withstand this heat.

Therefore, you don’t have to be worried about getting tetanus from food made on a rusty grill.

How To Get Rust Off Blackstone Grill Top

If you notice rust on your Blackstone grill, don’t panic. There are various safe and effective solutions you can use to remove rust.

Here is a step-by-step guide to help you get rust off a Blackstone Grill top:

Of course, you need some tools to help you remove rust from your Blackstone grill. But, these will vary depending on the available products and what you are comfortable using.

Materials needed included rags, gloves, citric acid, grill stones/sandpaper, and a metal scraper. You can get alternatives to these materials, but please ensure you use cooking oil.

Do not use any other oil on your grill that isn’t meant for consumption. Remember that your grill is designed to make food, so using a product that can’t be consumed isn’t a good choice.

Use palm, olive, or sesame oil if you don’t have vegetable oil. You can also replace citric acid with lemon juice or vinegar.

If you don’t have rugs, you can use paper towels. And when choosing your gloves, ensure that they are heatproof.

Wear your heat-resistant gloves to prevent you from accidentally burning your hands. Then, if your grill is on, turn it off.

After, bring the cleaning supplies to the counter close to the grill. Please ensure that your counter is clean and has no food products before putting your tools there.

Also, ensure that there’s nothing on top of the grill.

Turn your grill on and set it to the highest temperature. Leave it that way for around 30 minutes, then turn it off.

Heating helps loosen hardened rust on the surface of the grill. As such, it’ll be easy to remove.

Once you turn off the power, allow the grill to cool down. Don’t worry. You will have enough time to clean the rust off before it hardens again.

Use a metal scraper to scrape the grill’s surface to remove rust. You may need force to get to the rust’s root.

Continue scraping until you have a smooth surface when running the scrapper through it. Then throw away the dirt you’ve scraped off.

Pour several drops of your chosen cooking oil into the grill. The right amount depends on the size of the grill’s surface.

Ensure that the oil covers the whole area, but it’s not thick, which is why you need to add lemon juice or vinegar.

Continue until your grill is smooth and shiny. Use paper towels or rags to wipe off the cleaning liquid made of rust and oil.

After, mix vinegar with warm water and use it to wipe greasing using a sponge. This removes any smell of rust and cleans the grill further.

This last step helps protect your grill and prevents more rusting. It involves pouring an oil layer on top after you’ve finished cleaning to delay rusting.

How To Prevent Rust On Blackstone Grill

Helpful Tips To Know About If Blackstone Grills Rust

Rusting is common in Blackstone grills, as we have seen. However, you can take several steps to clean and prevent rust from accumulating.

In addition to the above steps:

Blackstone grills are made of cast iron. While this makes them durable, it also means that they can and do rust.

However, if they do, there are various ways to clean the rust safely. Plus, you can prevent rusting before it becomes a problem.

link to Are Weber Grills Worth It

If you've been recently looking for a grill, the high chances are that you've heard about the Weber grills. They're very hyped with customers who can't seem to get enough of how good these grills...

Any metal that is exposed to salty humid air for long enough will eventually rust and corrode, which can put a significant damper on your cookout plans. Re-buying the same cheap grills is terrible...