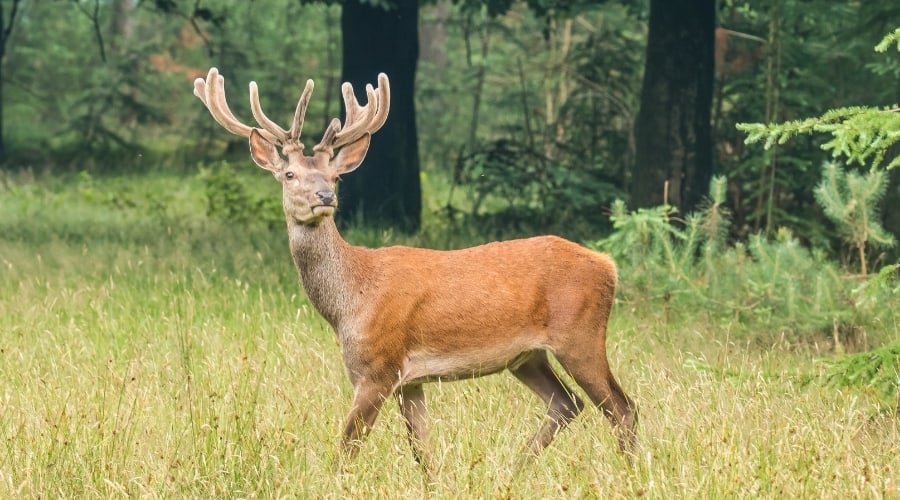 Deer are wild animals that weigh at least seventy pounds and often much more. Of course, they can bite you.

Deer will bite people however it’s extremely rare. In almost every recorded incident, the bitten human has knowingly or unknowingly done something to make the deer feel threatened. Deer are timid outside of rutting season and will only attack if they cannot retreat. The best way to avoid a deer bite is to maintain a respectable distance.

This article explores some of the risks associated with deer interactions and how you can avoid being bitten.

There are no reliable statistics on the number of deer bites sustained per year in the United States. Of the 120 Americans killed annually by deer, only a handful are non-vehicular, and all involve humans getting too close to fawns or male deer at the height of rutting season.

While it’s possible some bites go unrecorded, if they do occur, semi-tame animals in well-populated national parks are the most likely suspects.

Truly wild deer rarely attack and, when they do, they attack with their hooves and/or antlers. Biting requires close proximity, and a skittish deer will always run away from humans if it has the option.

The only place where deer bites are a risk is Nara Park in Japan where more than 1,200 wild sika deer roam freely. In 2017, a staggering 16.3 million people visited the park to enjoy close contact with the animals and see their famous bow.

Though these deer are wild, interactions with humans have changed their behaviors and caused them to become less fearful. They eat food out of people’s hands and sometimes tolerate stroking and petting.

This curious combination of wildness and close human contact means deer bites are more common here than anywhere else.

Tourists are permitted to feed the deer but reminded that they are still wild animals capable of biting and kicking if they feel frightened of or teased by park visitors.

Of the deer bites that do occur in Nara, the majority are not aggressive and happen because an animal mistakes an inedible item such as a mobile phone for food.

Again, a wild deer can absolutely bite a human but it’s unlikely to do so in a situation where it can retreat instead.

What Makes A Deer Bite You

In almost all cases, deer bites are caused by human error of some kind.

Here are some things to avoid doing to stay on the good side of these peaceful mammals:

How To Stop A Deer From Biting You

In the unlikely event a deer tries to bite you, it’s because you’re far too close. Serious deer attacks, though very rare, are more likely to involve charging from a distance away.

If you get bitten, the likelihood is you’ve ambushed the deer somehow and/or done something to aggravate it. Biting is more a sign of annoyance than out-and-out aggression, angry deer just charge, so take the chance to back off before it gets really moody.

If you do get bit, the last thing to do is yell, scream or make any sudden movements. It will startle the deer into a fear response.

Making loud noises is a quick way to convince the deer that you’re a credible threat and it was sensible to bite you. It might then bite down harder, clamping its jaws together and shaking from side to side much like an attacking dog.

That first exploratory nibble won’t hurt much but the second more determined bite won’t be pretty. Even then, until a wild deer starts butting with its antlers, you’re not in grave danger.

A male deer can give you a nasty bite if you’re too close but it’s those sharp antlers that pose a serious threat.

Until a deer begins charging or butting at you, remain calm, speak softly and continue to retreat to a safe area. Walk backward so you can keep your eyes on the animal and stand tall to remind him you’re a sizable target.

You should only switch from an active stance (upright position, eyes forward) to a passive one (fetal position, protecting the head and neck) if a wild deer charges at you and there’s no escape route.

If you get knocked down, stay down to convince the deer he’s eliminated you as a threat.

Will A Deer Attack You and How To Know

Another way to keep yourself safe from wild deer attacks is to be knowledgeable about their behaviors. Deer aren’t mountain lions stalking their prey through the woods in silence.

They never attack humans without warning because fighting us is not useful to them. Attacking endangers their own lives and the lives of any fawns they’re trying to protect.

They will always try to warn you off first. A deer is going to do everything it can to discourage your presence and convince you to back off peacefully.

Being able to recognize these warning signs will help you know when a wild animal is transitioning from annoyed to really, really mad.

Here are some warning signs to look out for:

There’s very little information out there on the strength of deer bites because they’re so uncommon. Nibbles and exploratory bites are possible depending on the environment (Nara Park, for example) but full force deer bites are extremely rare.

Biting is not a deer’s primary defense mechanism. It would much rather use its hooves or antlers because they are significantly more dangerous.

There are some stories online about people getting bit while trying to wrangle wild deer and all the evidence suggests these bites do hurt.

You’re going to notice if you get chomped by an angry doe or a big daddy buck with a nasty temper. Some accounts suggest a deer will bite down and shake its head from side to side much like a pit bull.

Fortunately, the force of a wild deer bite is more likely to resemble the bite of a cow. Cows and deer lack the top teeth necessary for a really strong, dangerous bite.

Like cows, deer have one set of teeth on the bottom of their mouths. The top of the mouth contains no teeth at all, only a bony pad for mulching up rough leaves and shrubs. It’s the reason a deer cannot bite down as forcefully as a dog or horse.

A deer cannot lock its teeth in a strong grip which is why these animals shake their heads around when they attempt to bite. They’re more likely to gain the upper hand if they can knock you to the ground.

Stay on your feet. Don’t panic; a deer bite will hurt and can cause some minor damage but nothing like the kind of lacerations a horse can inflict.

What’s more, deer don’t have pointed canines and incisors as we do. Most of their teeth are wide and flat. They’re designed for grinding, not tearing.

The biggest and strongest teeth are right at the back of their mouth and largely incapable of inflicting serious bite wounds.

A deer’s sharpest teeth – the incisors – are at the front of their mouth at the narrowest point which limits the amount of bite force they can inflict.

They may use these teeth to briefly pin a target but if they can’t knock them to the ground, they won’t be able to hold on for long.

Helpful Tips To Know If A Deer Tries To Bite You

Deer bites are so rare because these animals are not naturally aggressive outside of rutting season. They have a gentle and timid temperament for most of the year and much prefer to retreat and avoid confrontations with humans.

If you believe you are in imminent danger of a deer bite, think about what you might have done to frighten the animal and how you can convince it you’re not a threat.

Keep these helpful facts in mind:

The likelihood of getting bitten by a deer is so scarce it’s not worth worrying about unless you work closely with these animals in national parks. They’re not an aggressive species and do not pursue confrontations with humans except in exceptional circumstances.

It’s still helpful to remember that deer are wild animals. They can bite and, if they feel threatened, they might just try it. But they’d much rather run away.

Deer have particular feeding habits. If you're interested in using this less expensive way to feed backyard deer or attract them to hunting grounds, I have some useful information about deer and dog...

Continue Reading
link to 7 Places Deer Sleep When It Rains

It’s rare for people to catch deer sleeping and even harder to catch them napping in wet weather. Yet, we know these elusive animals are out there somewhere curled up and bedded down against the...