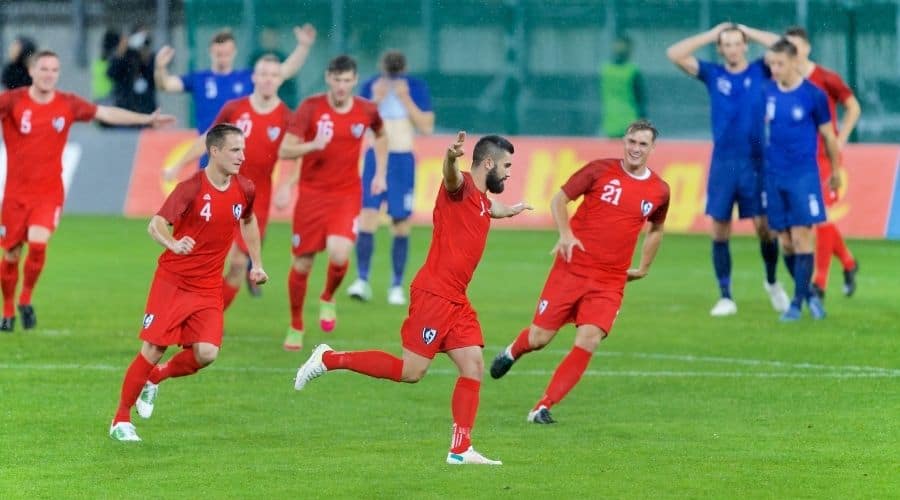 Soccer players use many unique gestures to celebrate a goal, taunt the crowd, and even communicate with loved ones watching the game, but one of the most unusual is the wrist kiss.

Only a few players use this specific gesture, and it is sometimes only part of a particular set of actions. What is the main reason soccer players kiss their wrists?

The main reason soccer players kiss their wrists is that a tattoo in that location symbolizes someone meaningful in their lives and to show respect. The wrist kiss is a way of dedicating their play or a specific score to a person they love deeply. Typically, it is someone like a child or spouse who can’t be there in person.

Why Do Soccer Players Kiss Wrist

Soccer players with tattoos often kiss them to dedicate a play to the person who the tattoo symbolizes because this quick gesture doesn’t delay play.

Still, it is obviously out of the ordinary so that people watching will see it. Typically the tattoo is for a family member, such as a child.

However, the wrist kiss is just the tip of the iceberg for player gestures.

Some gestures are unconscious. Throwing your arms up when you do well is a universal celebratory indicator.

Likewise, putting two hands to your head or face is the opposite and indicates a player just messed up or missed a goal.

However, the wrist kiss is a part of a much larger tradition of intentional gestures.

There is a long history of soccer (and other professional sports) players making unusual gestures.

Some are directed at the crowd, either to encourage their fans or to show disdain for the other team’s fans when they boo.

These gestures can mean anything from “I love you” or “I can’t hear you” to more obscure meanings.

For example, Dele Alli has a famously tricky gesture that became an internet challenge.

Which Soccer Players Kiss Their Wrists

There are only four professional players who are well known for kissing their wrists. Alvaro Negredo, Fabio Coentrão, Luis Suarez, and Santi Cazorls all use the wrist-kiss gesture on the field.

Each player has a specific reason for choosing the gesture, and all of them have to do with tattoos that symbolize someone close to their heart. I will share those stories.

Alvaro Negredo has had a very up and down road to fame. Although his talent is undeniable, he suffered some early and likely painful setbacks in his career.

In 2010 he was passed up for the World Cup team. Then he started in the semifinal of Euro 2012, yet two years later, he would again be cut from World Cup play and no less on the eve of the event.

Needless to say, this is one player who is genuinely grateful to be on the field scoring goals.

Most players who kiss their wrists or other tattoos dedicate a goal to a child or a spouse.

However, for Negredo, the “C.J.R” on his wrist symbolizes his brothers Cesar and Ruben and his parents, Jose Maria and Juana, who share the “J.”

Alvaro told the Daily Telegraph, “It’s a dedication to the hours and effort they put in over the years… Imagine three brothers? A load of washing from all the football kits! But also taking us to all the matches and making sure we were able to play.”

Fabio Coentrão kisses his wist to dedicate his goals to his wife and two children.

In 2010 Coentrão married Andreia Santos, and together they have a daughter and son named Vitoria and Henrique.

The tattoo is his daughter’s name, but I didn’t find any more information on this particular player’s celebration.

Luis Suarez has a three-part gesture he makes after scoring a goal. First, he kisses his ring finger for his wife.

Second, he kisses his wrist over the tattoo of his oldest daughter Delfina’s name, and finally, he kisses three fingers to symbolize his wife and two children.

The gesture is a reminder to himself, his family, and to a lesser degree, his fans that his heart is at home.

He is telling everyone that the goal he just scored is for the people he cares for. Playing a sport you love is a fantastic way to make a living, but it’s not exactly a 9 to 5 day job.

Soccer players are often away at practice or traveling the world playing games. The more successful the player, the more time they spend away from home.

These small gestures help them maintain a connection even when they cannot call home or share their victory with the ones they love until later.

If you want to know more about Luis Suarez’s wrist kissing, I recommend this video from Oh My Goal Soccer Stories.

Santi Cazorla celebrates all his wins by kissing his wrist as well. Unlike Suarez, he is a one-gesture person.

Every goal he scores is dedicated to his son, so he also has a wrist tattoo. Unlike most, Santi’s tattoo is in Hebrew.

Cazorla told The Arsenal, “I always celebrate like that because I dedicate goals to my son… You can see the tattoo I have in my arm, that’s for him. If I don’t, he gets annoyed with me and, at home, he’s not happy!” and “… it’s always a dedication to him. He’s the biggest thing in my life, and everything I do, I dedicate a little to him.”

Helpful Tips To Know About Why Soccer Players Kiss Their Wrists

Not all soccer players kiss their wrists to celebrate their goals. However, among those who do, it is always about family.

Here are more helpful tips to know about why soccer players kiss their wrists.

Kissing your wrist certainly isn’t something many people do every day. However, if you are a pro soccer player away from home for a lot of the year, and you might play for a team in a country where your family doesn’t live, then staying connected is essential.

Players who kiss their wrists after scoring are kissing tattoos representing one or more immediate family members.

It is a way to show respect and remind children, siblings, wives, and parents that they are always on your mind.

Plus, a quick wrist kiss will not violate any excessive celebration rules, and it often gets spotted by cameras and fans.

Not every soccer player has easy access to professional coaches, but many would still like to significantly improve their game skills when they aren't on the field. YouTube soccer training channels...

Lionel (also known as Leo) Messi is easily one of the best soccer players in the world, so if you are serious about the game, you want to play with Messi Soccer Balls. Since he burst onto the scene,...