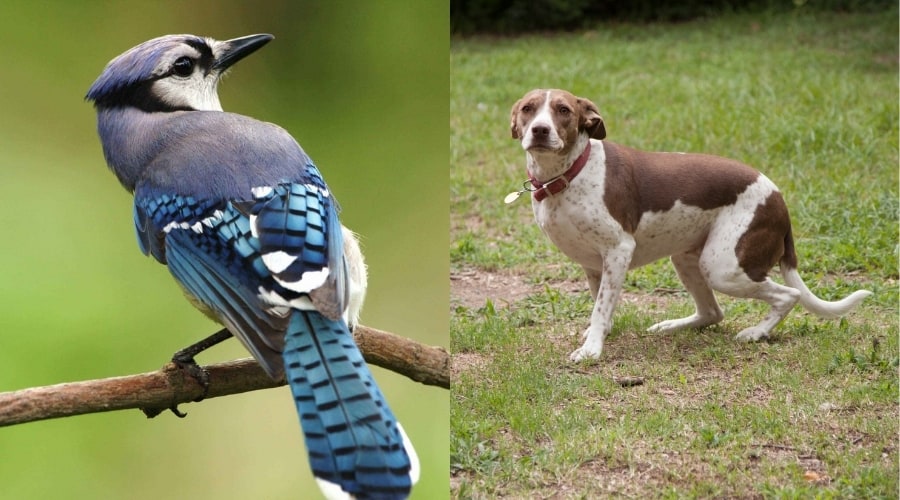 According to wildlife experts, bird attacks on people and pets are increasing. Yet, they also say these close encounters are nothing to be concerned about.

As the owner of a dog who’s had several noisy run-ins with backyard birds, I want to know: why is a bird attacking my dog? And are the wildlife experts right when they say backyard birds pose no danger to pets?

Common bird species like the Starling, Crow, Magpie, Cardinal, Mockingbird or Jay are not naturally aggressive to dogs or people. These birds know they’re much too small to win a fight against a dog. They only swoop and try to attack dogs when they feel it’s necessary to protect themselves or their babies in the nest.

Here are common reasons why a bird would attack a dog:

The important thing to remember is even very aggressive birds aren’t trying to take your dog down. Bird attacks are all about annoying the target until it gives up and leaves the area.

There’s lots of swooping and diving but rarely any direct physical contact. Now let’s find out more about why birds attack dogs in their backyards.

Wildlife experts say these are the most common reasons birds behave aggressively towards dogs and other large animals.

As bird numbers decline due to climate change and other environmental threats, it’s more important than ever for humans to live in harmony with backyard critters. Understanding one another is the first step.

The single most common reason for bird attacks on dogs is very simple and understandable even from a human perspective.

Birds are most aggressive when they’re protecting eggs or hatchlings in the nest. It’s the only time a bird will lay its life on the line and refuse to back off even from a very big dog.

If it’s early spring to mid-summer and your dog is getting attacked in a particular area of the backyard, take a walk around and look closely at the surrounding trees.

Look for signs of nesting. If you keep your dog away from the nest, the attacks will stop. The birds don’t want to fight.

They’re parents patrolling a perimeter around their babies and, if your dog breaches it, they’ll swoop until he leaves.

Similarly, if your dog gets close to baby birds taking their first steps outside the nest, their parents may strike to protect them.

This is most likely to occur in late summer and can be difficult to avoid because the babies are usually well hidden.

Paying close attention to your dog’s behavior can help you avoid these aggressive encounters. Often, dogs catch the scent of baby birds and curiosity drives them to track and locate them.

If your dog is sniffing at a particular area of the yard and suddenly finds himself under attack, putting some distance between him and the defensive birds will end it.

Backyard birds are much more likely to attack one another than pets. Territorial species such as the catbird, robin, starling, sparrow, and grackle are known to set up perimeter patrols around abundant food sources.

Any animal that crosses the perimeter might find itself at the mercy of a swooping watchman with sharp talons.

This is usually a case of overzealousness on the part of the attacking bird. If they’re safeguarding a backyard feeder, for example, they probably know your dog can’t reach it and/or has little interest in seeds.

But any movement in the area might trigger a frenzied response from a bird who never learned to share. You’ll know if there’s a tough guy in your backyard because he’ll scare all the other birds away.

It’s extremely rare but wildlife experts say backyard birds have attacked pets and stolen their food in times of desperation.

This only happens if food sources in the area are severely depleted and local birds are doing unusual things to survive.

It is still rare but due to environmental pressures and the urbanization of natural landscapes, this behavior might become more common.

Fortunately, it’s an easy one to solve. If aggressive birds are bullying your dog out of his breakfast, give them an alternative.

Hang up feeders, preferably around the edges of the backyard, and help to create a safe space where they can come and feed. Feed your pet indoors until the attacks stop.

5 – Responding To Past Aggressions

This is perhaps the most interesting reason why aggressive birds sometimes target one particular animal. We’re used to thinking of birds as airborne automatons, flying, feeding, laying eggs, and flying some more, but science has recently revealed the complexity of their memories.

In short, birds remember. Some species remember for many years after an event.

If your dog has chased or intimidated a flock of birds, even for playful reasons, they’re likely to remember the incident.

Crows have memories that last at least five years, and they pass on lessons to their children. Studies say these birds inherit grudges and behave negatively toward pets or people who have caused distress in the past.

Like people, some species of birds are just bolder than others. They have some success scaring pets away from nesting sites and food sources and begin to lose their fear of large animals.

This overconfidence is typical of species such as the common robin, blue jay, red-winged blackbird and house wren who are easily inflated by their own triumphs.

Comfort breeds boldness. If the birds in your backyard are naturally territorial, have an abundance of food and few predators to keep them cautious, they might get cocky and try to claim the space.

If attacks are persistent, use indirect methods to force them out such as blocking off nesting sites, removing feeders and/or installing spikes on gutters and fences to reduce their perching options.

The wildlife experts are right; an increase in bird attacks isn’t something to be overly concerned about. Common backyard species pose little threat to a full-size human or even a small dog.

They only see us as a serious threat when protecting vulnerable hatchlings who cannot easily fly off and escape. The vast majority of bird attacks are defensive actions designed to make you go away.

Bird attacks are increasing because birds and humans are being forced to share the same dense, urban spaces. As forests get smaller and cities get bigger, there are fewer safe spots for nesting, feeding and sleeping.

Birds that would rather avoid people are being pushed into suburban backyards where their behaviors must change to fit busier, more competitive environments.

Here are some things to remember if you need to protect your dog from bird attacks:

I hope this deep dive into the common reasons behind bird attacks has given you food for thought.

I understand that humans go into territorial mode too when their dogs come under attack, but I also think it’s important to find ways to live in harmony with nature.

When we understand one another, it’s easier to exist peacefully together. And who doesn’t like birds anyway?

link to Are Birds Scared of Dogs

Continue Reading
link to Do Birds Hate The Smell Of Vinegar