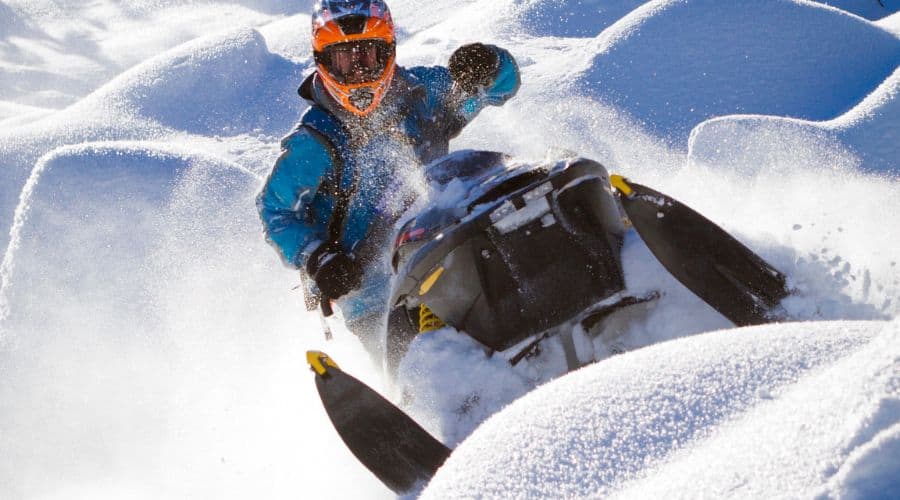 While there’s no feeling like being the first to ride over a fresh trail in your snowmobile, there’s no way to avoid well-used areas as the season progresses. More sleds mean more bumps forming on the path, which can add up to cause a pretty jarring ride, but why is it so unavoidable?

Why do snowmobile trails get bumpy? The answer might surprise you, so read on, and I’ll share the top 5 reasons.

The main reason snowmobile trails get bumpy is because of moguls, which are mounds of snow and ice that form as a result of snowmobiles passing over fresh, fluffy, uncompacted snow. The passage causes little bumps to grow where skis dug in, and these bumps or moguls evolve over time like an icicle. Every successive snowmobile adds to the moguls.

Why Do Snowmobile Trails Get Bumpy

The bumps on a snowmobile trail are a natural result of people riding them. However, some types of riding contribute more than others.

For example, gunning the engine as you cross a road, which may be the quickest and safest way to pass, causes your skis to dig in deeper.

That action leads to deeper indentations and higher peaks in the trail, which other riders will add to as they pass.

Moguls are little dips and hills, the literal, physical ‘thing’ that makes a snowmobile trail bumpy.

While they can form naturally in some cases, they primarily exist due to sleds passing through the area. Your skis are what create and add to the rough trail conditions.

When you gun the engine to cross a road or turn a corner, it causes your ski to dig down a little.

This pushes snow forward, creating a small mound, and the snow on the other side becomes a minor dip back down.

Then, as you pass over it with your track, it compacts that redistributed snow. The person behind you adds to the mound and moves it very slightly.

Over time moguls become deeper and more frequent, but they also move because of the weight of the machines that make them.

2 – Improper or No Grooming

Some bumps will happen on a snowmobile trail no matter how it is cared for. Private trails are rarely, if ever, groomed.

Sadly, that means any bumps in the path are essentially permanent features, and the only solution is to groom them yourself, find a better route, or accept it as is.

On professionally maintained snowmobile trails, you will still encounter bumps in the path.

Groomers work hard to help keep things enjoyable, and most are excellent at what they do. However, not everyone can be an expert.

Improper grooming can still happen if the person smoothing the trail isn’t familiar enough with the equipment or something goes wrong.

Groomers for snowmobile trails are expensive, and the replacement parts are even more so.

As a general rule, the operators of these machines are very familiar with their capabilities because owners of paid groomed trails won’t allow just any novice to wreck their costly gear.

Poor timing is more about how overenthusiastic sledders behave.

For a trail to be groomed, you need at least a foot of snow, but everyone knows you can ride in less.

When groomers take out their top-of-the-line machines, they must wait for ideal grooming conditions.

However, there’s a fair chance that early-season enthusiasts have already gotten to the trail and started making moguls.

On rare occasions, you may get lucky, and at least a foot of snow falls immediately. In these cases, the trails are likely to be smoother.

Similarly, the machines work better if the temperature and snowfall remain relatively consistent.

Unfortunately, groomers have to tackle trails in sub-par conditions, which means tracks will get bumpy despite the best efforts and top-tier equipment.

Even the best-groomed trails are subject to the laws of nature. A groomer smooths snow to an extent but can only do so much to help this issue.

For example, once the spring thaw affects the snow, making it slushy, a grooming machine can shave the top off a mogul, but it can’t force that watery blend to re-form into powdery flakes and spread out to smooth the area. There will still be a hard spot below.

As Bergstromskegs explains, “…temperature and water content have a great impact on the snow stability… Sometimes the snow bonds together and the trail will last longer. At other times even though the trail looks good it just won’t last. Just a few snowmobiles will greatly affect how it looks and feels… In the same trail, we also find hard spots (places where the sun has melted the snow and it then freezes at night) and soft spots where the trail hasn’t been affected by the sun as much. These areas groom differently.”

5 – Debris Under The Snow

Bumpy trails can mean significant danger when a layer of snow isn’t very deep. Anything from a smallish rock to an entire tree could lie below that perfect powdery surface.

Typically a snowmobile needs at least six inches of snow to work correctly, but some lightweight models can glide over less.

The problem with sledding in shallow snow is that there’s less buffer between your vehicle and the ground or anything else below you.

As frustrating as it is, it’s better to wait for deeper snow before heading out to the trails.

Not only will this give groomers time, but it will also prevent you from gunning the engine, digging in a ski, and hitting subsurface debris that can damage your snowmobile.

Maintaining a snowmobile trail is about more than grooming after the snow falls.

I recommend joining your local snowmobiler’s club or at least riding on maintained trails with deep enough snow to avoid dangerous debris.

To better understand what that means and how much work it takes, check out this video from Andrew Camarata.

Helpful Tips To Know About Why Snowmobile Trails Get Bumpy

Bumpy trails are a part of life for snowmobilers, which is why some riders prefer to go off trail.

Here are a few more helpful tips to know about why snowmobile trails get bumpy.

No one likes to ride a bumpy trail, but it is part of snowmobiling. Whether you knew it before reading this or not, you are part of the cause of those bumps.

No matter how careful you are, moguls will still happen, and passing over them helps them grow and move.

Wait until there’s enough snow for the groomers to get out and compact it before you ride and be careful when you take corners or cross streets.

link to What Do Snowmobile Ski Skins Do

Snowmobiles are the fastest and easiest way to traverse ice and snow quickly, but that speed equals wear and tear on your skis. Inspecting, maintaining, and replacing your skis regularly is...

Continue Reading
link to Can A Snowmobile Go On Road