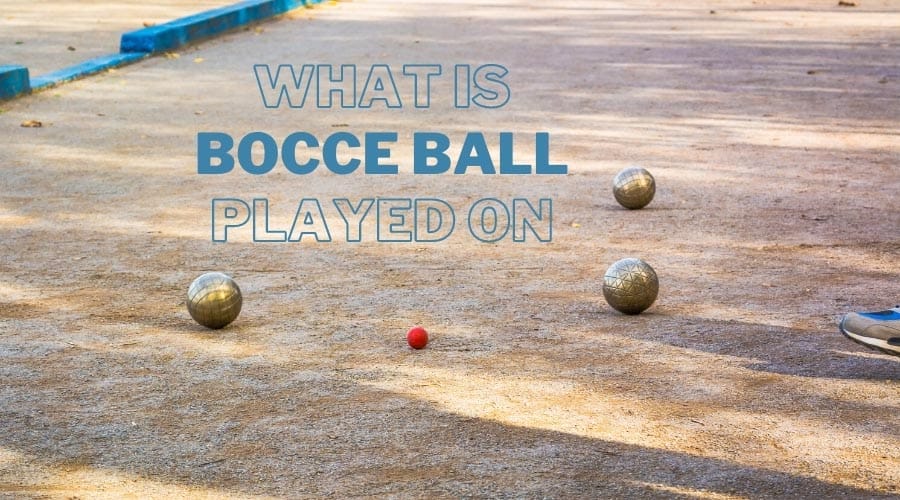 The classic Italian game of bocce ball is more popular than ever but what is bocce ball played on? The game is very versatile, and we are here to help you get your bocce ball court set up.

Bocce ball can be played on a variety of surfaces including grass, crushed rock, artificial turf, clay, sand, or granite. Professionals recommend playing on a mixture of crushed rock and sand because it allows the balls to roll fast and straight with minimal bounce.

Bocce ball is a great way to have fun with family and friends. It also reduces stress. They are not hard to build and will provide hours and hours of fun. You also don’t have to worry about spending a fortune, because there are numerous materials you can choose from.

We are here to help you find what works so you can spend your days having fun.

What Surfaces Is Bocce Ball Played On

So, you are ready to play some bocce ball. And you may even build your own court. Building a bocce ball court is not hard, but you do need to have the right surface to play on. The surface needs to be flat and it needs to allow for minimal bounce.

Of course, you do not have to have a professional bocce ball court to play. You can play on the grass, a patio, the deck, and even at the beach too.

Bocce ball can be played on any level surface be it gravel, hard-packed dirt, or grass. In this case, you need to mark out the boundaries and lines that a court would have.

The versatility of the game allows you to play it anywhere. With our guide you will learn all you need to know about what bocce ball is played on.

What Is A Bocce Ball Court Made Out Of

The best materials for a bocce ball court are clay, turf, and grass. You can also play on sand, but it is not the best surface. Professional bocce ball courts use crushed stone or oyster blend because the ball can roll faster and straighter.

These materials also prevent bounce and allow better drainage. Drainage is important for bocce ball courts to prevent pooling which can cause holes and uneven ground.

Can You Play Bocce Ball On Grass

Bocce ball can be played on the grass. As long as you have a long, narrow stretch of even grass, you can make a court to play. The surface of the ground needs to be completely level and long enough to accommodate a standard bocce ball court, 90 feet by 13 feet.

You also need to keep the grass cut as short as possible, as long grass will interfere with the movement of the balls. You can also get a bocce ball court kit from Amazon that provides webbing for you to mark out your court boundaries.

How To Build A Bocce Ball Court On Grass

To make a court on your grass, you need to organize the playing field area. The most level part of your yard will have to be used for a bocce ball court. There cannot be any incline or uneven ground. Any weeds need to be removed carefully, so as not to create any holes.

You then need to mow the lawn as close as you can to the ground without causing any damage. The longer the blades of grass are, the more they will interfere with the ball movement. Make sure you rake up all the grass after mowing, to leave the court as smooth as possible.

To help mark out the court, you can use lawn markers from Amazon. Or you can make a wood frame for the court using plywood cut to match the shape you desire. The frame will need to be secured using 1-foot stakes.

Place landscaping fabric across the court area so that weeds cannot interfere from below. Add a thin layer of sand or rock and then install a thin layer of artificial turf on top.

Artificial grass gives you a beautiful playing space all year round. Having an artificial grass court also requires less maintenance so you have more play time.

When it comes to choosing turf, think about the same type you would want for a putting green. Low profile grass is essential to bocce ball play.

You can create your bocce ball court in your yard to fit the yard dimensions. It does not have to be as large as the regulation size of 91’ by 13’. What matters is the play area is smooth and free from inclines. You also need to design your court based on the following dimensions:

What Size Is A Regulation Bocce Ball Court

The regulation size for a bocce ball court is 91’ by 13’. You can make exceptions to this if you need to fit a court in your backyard. You just need to make sure that foul lines, mid-court lines, and inbound markers are clearly set.

Regulation bocce ball courts will also have sideboards and backboards for more strategic playing. You do not need to have these for a backyard court.

You will need to mark out the following lines within the playing area.

A half court marker (equal length from both ends) also needs to be placed. This marks the minimum distance pallino has to be thrown.

How To Care for Bocce Ball Court

Bocce ball is most commonly played outdoors. Although indoor bocce ball is becoming more popular. Game play outside is the same no matter what surface you play on. What is important with outside bocce ball is maintenance of the court.

When you play outside, you need to ensure that the surface for play is kept up. Otherwise, uneven and dirty courts will interfere with play.

After every play brush or drag the surface with a landscaping rake that is found on Amazon. These are designed to get close to the turf and in the gravel to remove all debris. It also helps to smooth the surface. You will need to water down the court to eliminate dust if you have a clay surface.

Can You Play Bocce Ball On The Beach

Bocce ball can be played at the beach. This may seem strange since you need an even playing surface, but it is true. Grab a soft bocce ball set from Amazon and head to the beach. The main difference is that there is no official court.

You only have a shooting circle that you draw in the sand. Typically, you only need to reach 13 points to win beach bocce ball too. This predetermined score is higher for regular bocce ball games.

How To Play Bocce Ball On Beach

Get into teams or play as individuals and choose a color ball for each team. The rules are the same. You want to get your ball closer to the pallino than the opposing team.

Draw a shooting circle in the sand that measures between 5 and 8 feet wide. Stand inside the circle and toss the jack away from this area. Each team or player then tosses a ball towards the jack. Whoever gets closest goes first.

How To Play Bocce Ball On A Court

You need to have a flat and smooth surface to play bocce ball. You can play on grass, turf, or sand. Once your court is set up, it is time to play.

You can have anywhere between 2 and 8 players. Teams need to have four balls to play, so the number of balls per player will depend on team size.

A bocce ball game is made up of frames and points are awarded to a team after each frame. You can get a handy scoreboard from Amazon to help keep track. Game play will start with tossing the pallino (small white ball) and it needs to land behind the center line to be playable.

A player from one team will toss a ball towards the pallino. The goal is to get as close as possible to this target. A player from the opposing team will then do the same thing. This player wants to get the ball “inside” which means closer than the other team’s ball.

They keep throwing until they do this. Whichever team does not have the closest ball to the pallino will bowl. This is done until all four balls from each team are played.

Points are given for each ball that is closest to the pallino before the nearest one of the opposing team. The first team to 15 points (can be 16) is the winner. Whoever loses the frame is the first to bowl for the next frame.

Bocce ball can also be played indoors. There are several leagues that play in indoor regulation-sized courts. Obviously, your house is not going to accommodate a regulation-size bocce ball court.

There are indoor bocce ball kits (link to Amazon) you can get so the game can be enjoyed indoors too.

Most carpets work fine for bocce ball court surface. So long as it is not a fluffy shag carpet, the surface will be smooth for play. You will want to devise some sort of exterior board to block the balls from rolling out of bounds and through your house.

The balls for the recreational indoor courts are smaller and typically softer. They also come with instructions on how to set up a court inside, providing accurate measurements you can follow.

There are a number of surface options for your bocce ball court. The material you choose will be based on budget and availability. The standard materials of clay, grass, turf, and sand all work well.

In addition to the material, there are few other helpful things to remember when creating your bocce ball court.

Bocce ball is a game for all seasons and for everyone. It is a lot of fun and relaxing way to spend time with friends and family. No matter what surface you play on, what matters is that you follow the guide to setting the court up right.

Stick to one of the best surfaces such as clay, grass, or turf and be sure to maintain it often. Grab a bocce ball set and any of the many accessories out there and in no time, you can start your own recreational league.