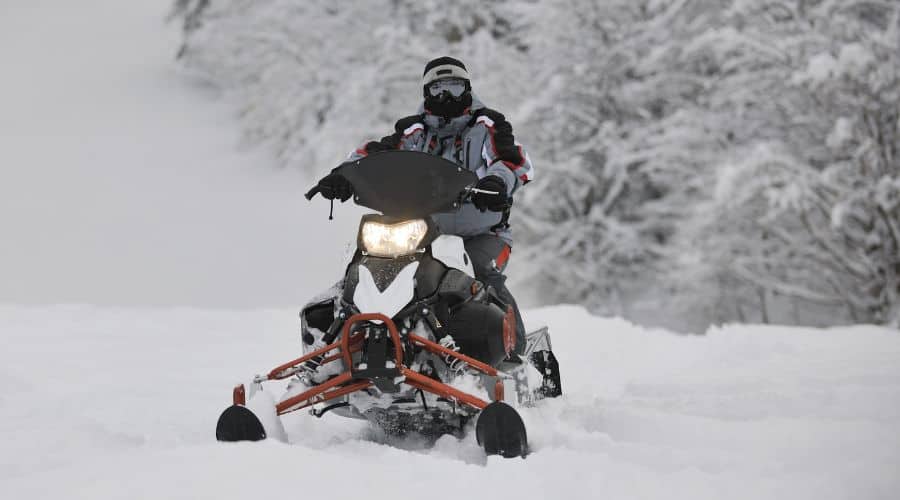 If you drive a car, you hopefully have a muffler, but you have a can when you’re on a snowmobile. Although there are many similarities between automobile and snowmobile engines, there isn’t enough space for a car-like exhaust underneath the chassis setup on a sled.

What is a snowmobile can? I will share everything I know about these modified exhaust systems, so you know what you’re looking at.

Snowmobile cans are an attachment you use in conjunction with your exhaust pipes to reduce weight and increase performance. Depending on the type of can you install, it affects how noisy your sled is as it directs the flow of exhaust to the back where it gets vented.

What Is A Snowmobile Trail Can

A snowmobile trail can change the amount of noise your sled makes as you ride. Switching out a louder race can for a trail can is an easy way to comply with local noise regulations.

These simple attachments direct the exhaust out of the back end and change the volume of the expulsion, thanks to their unique shape.

Stock cans tend to be quieter than aftermarket options. Gunning the engine will always be louder than idling, but you can significantly increase your sound level with the right (or wrong) can.

Many of the snowmobile trails in the US cross private land, so restricting the amount of noise sleds are allowed to make fosters good relations and keeps those areas accessible.

A snowmobile trail can is loud without being race-engine loud and will generally help prevent you from breaking local noise ordinances.

ABC Up North reported on why sledders should get their machines checked by the Department of Natural Resources if they wanted to avoid getting a ticket in Michigan.

Similar laws and rules exist in most states to protect people living in the area of public trails from too much noise pollution brought on by sledders with extremely loud cans.

Private property owners are not required to consent to trails going through their property, so controlling your noise with a path can help ensure those trails stay open for many winters.

What Is A Stock Can On A Snowmobile

The stock can on a snowmobile is a factory part your sled comes with when you buy it new.

A can channels exhaust from the pipe, making your machine louder or quieter.

When you leave the stock can on, it simply means you are sticking with a part instead of switching it out for an upgrade.

The exhaust pipe controls the gas release rate on a car or other vehicle, including your snowmobile.

However, instead of a muffler to control the sound, you get a modified exhaust system commonly called a can.

The can does the same job by regulating how the gas from the exhaust pipe sounds. Your stock can is probably much louder than you’d like, but it’s still better than running with straight pipes.

What Is The Loudest Can For A Snowmobile

The loudest cans for a snowmobile have never officially been measured. Riders mention MBRP and Dinoport as contenders, but there’s no hard evidence.

More importantly, even within these companies, there are many different models.

Not all cans make your sled louder. Some are specifically designed to limit noise or cut it down instead.

I would say that any racing can is an excellent place to start. However, the pipes and engine in your sled also contribute to the overall sound.

The higher your RPMs, the louder it will get, and a sled with more Hp and the same can will produce more noise.

For a better idea of how loud a snowmobile can get, I recommend watching and listening to this video by Mark Freeman. You can hear it clearly, even with low volume.

Snowmobile cans do not add horsepower, but they do reduce weight. Lighter sleds move faster and burn less gas as they go.

Moreover, they also reduce wear and tear on the engine over time, so there are plenty of benefits, but Hp isn’t one of them.

Although a can replacement may be part of addressing an exhaust system that’s slowing you down, it’s not directly improving your machine’s power level.

The best way to increase horsepower is with larger pistons and more fuel. However, being a gas guzzler isn’t always the best plan.

You can get similar performance upgrades with a better can, a better clutch setup, and properly cleaned and set carbs.

What Is The Best Snowmobile Can 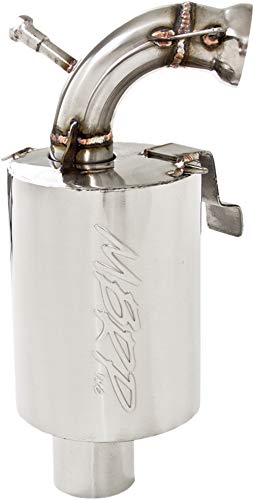 The best snowmobile can is the MBRP 126T209 Snowmobile Silencer from Amazon.

This is a great aftermarket can for anyone seeking a lightweight, 6-pound option that creates a more pleasant tone as you ride. This model is often no louder than stock cans until it reaches higher RPMs.

The 126T209 is made from high-quality 304 stainless steel. It’s rust resistant and durable, plus it installs quickly and easily.

Most importantly, this can is compatible with numerous models like the Ski-Doo Renegade and Summit series.

Bill said, “Exactly as described. As quite as stock until about 5,500 rpm the has a nice deep semi lowed tone. Love it !”

To have one of these outstanding cans delivered to your door, click here.

Helpful Tips To Know About A Snowmobile Can

The term can is confusing if you’re used to dealing with automobiles. The most straightforward simplified explanation is that they are like mufflers because they change how your vehicle sounds.

Here are a few more helpful tips to know about a snowmobile can.

A snowmobile cans serve the same function as a muffler. Racing cans on high-powered snowmobiles are the loudest, while a model with a smaller engine with a trail can or stock can is typically much less noisy.

Luckily, good cans are relatively easy to install, and they can either help you be heard or prevent noise complaints depending on the style you prefer.

Cans reduce weight on your sled, but they do not increase horsepower despite persistent rumors to the contrary.

However, choosing a good can with a lower tone and less volume has other benefits, like potentially reducing hearing damage from long-term exposure to the loud noise from riding your snowmobile.

link to How Does A Snowmobile Fuel Pump Work

Your snowmobiles fuel pump works a lot like a heart by pumping fuel from the tank to the engine so your sled will run. Without this relatively simple part, your gas tank would remain full, and no...

Continue Reading
link to How Does A Snowmobile Transmission Work