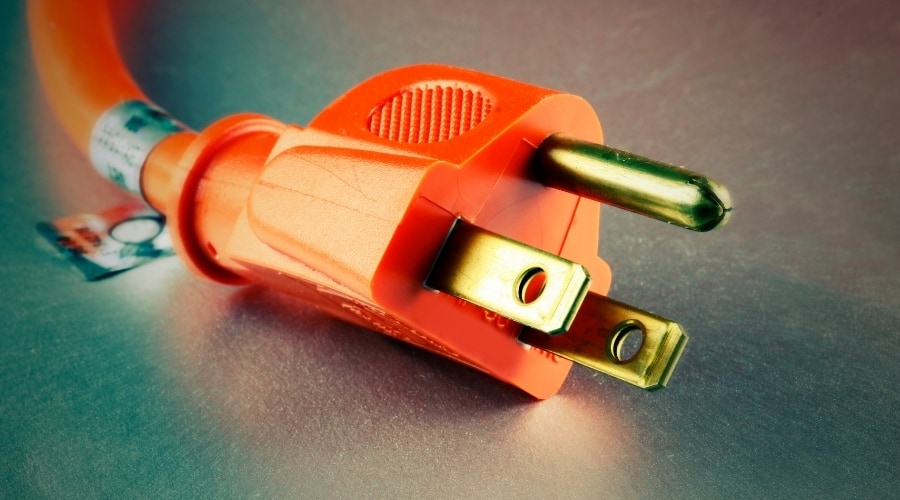 Extension cords cause more than 3,000 house fires every year which makes them sound like a dangerous thing to have around the house. However, most of these incidents are attributed to misuse. But do you know what really happens if an extension cord gets wet?

Water exposed to the live electrical current in the wires of the extension cord can cause it to stop working properly and pose a risk of fire or electrocution. However, electronics experts say high-quality extension cords can easily survive exposure to water and even be used again if handled correctly.

Most of the water we drink contains minerals and metals. These are the substances most likely to react with active electrical components and cause damage. The good news is the sooner you switch a wet extension cable off, the better its chances of making a full recovery.

So don’t send your wet extension cord to the trash. These things are designed to tolerate a spill or two.

What Happens If An Indoor Extension Cord Gets Wet

I want to stress I’m not saying go and submerge your extension cord in the tub or hook up speakers in the rain. It’s still unwise to get any electrical device wet.

There’s a risk of electrocution whenever water and electricity meet which is why your first action after a spill should always be to switch the power off.

If there’s no power, the minerals and metals in the liquid cannot conduct. They cannot cause damage to the cord’s circuitry.

The liquid stops being a danger until you switch the power back on again by which point you’ve hopefully dried the extension cord inside and out.

There’s always some risk of lasting damage but, if you get rid of all the water inside, it’s a small one.

There are several reasons for this. For one thing, there’s not much circuitry in a standard extension cord. There isn’t much in there to damage.

It’s a simple set of wires with plugs on either end. Liquid spills on devices such as stereos, laptops and games consoles are a much bigger concern because they contain a lot of sensitive components.

They’re also designed to be less robust in general. Although a lot of indoor extension cords aren’t ‘wet-rated’, they still come with a degree of waterproofing for safety reasons.

Manufacturers know that spills are almost inevitable if an extension cord gets used for long enough, so all are built with some tolerance to reduce the risk of serious injury and fire.

What Happens If An Outdoor Extension Cord Gets Wet

Of course, some extension cords are specifically designed for use in wet outdoor conditions. These products have a mark or stamp to identify them as wet-rated and protected from accidental or intentional exposure to liquids.

Purchase a wet-rated cord if you want to use plug-in devices such as smokers, electric fire pits, stereos and projectors outdoors in the garden.

Check the manufacturer’s manual to find out how much tolerance for water your extension cord provides.

Many wet-rated electrical devices come with an IP (ingress protection) rating. This is an indication of how much water can be safely tolerated.

Look at the second number in the IP rating. It ranges from 1 to 8 with eight being the highest level of waterproof protection.

An extension cord with an IP48 rating is safe to use outdoors even in very humid and/or rainy conditions. Whereas an IP42 rating means an extension cord can tolerate mild exposure to water but shouldn’t be used in very wet conditions.

Here are some things to look for when shopping for a wet-rated extension cord:

What Happens If An Extension Cord Is Submerged in Water

In the unlikely event your extension cord gets fully submerged in water, turn the power off immediately unless water has somehow managed to reach the plug end of the cord while the sockets are submerged.

This is an unlikely scenario but if it does happen, stand well away from the water and the cord. The safest way to neutralize the danger is to switch your electrical supply at the mains.

Then, switch off the power and unplug the device once the connection is severed and there’s no longer a risk of electrocution.

If for some reason you cannot do this, find some rubber gloves and put them on before you touch any part of the cord or wall socket. Rubber is an insulator and should protect you from shocks.

The more water gets inside your extension cord, the greater the risk of irreparable damage. However, the advice remains the same whether it takes on a little or a lot of water.

First, neutralize the danger from any active sockets by switching off the supply. Then, thoroughly dry the inside and outside of the cord to give it the best chance of a full recovery.

It may look like a bad situation but, if the cord wasn’t plugged in when it got submerged, the damage should be minimal. Remember water isn’t a conductor.

There’s still a risk from the minerals it contains but you have a good chance of maintaining functionality if you dry it out quickly.

What Happens If An Extension Cord Gets Wet While Plugged In

Wet-rated extension cords, particularly those with a high IP rating, should perform fine if exposed to water while they’re plugged in.

This is provided the plug end of the cord and the socket it is plugged into do not get wet. Regardless of a cord’s wet rating, it’s not safe to get inside the plug socket or on the plug’s prongs while it’s switched on.

Weatherproof outdoor extension cords are protected by insulating materials along the length of their wiring and around the socket seal when plugged in. But you should never attempt to plug in a cord with prongs that are already wet.

If an indoor extension cord (not wet rate) gets wet while plugged in, turn the power off immediately unless there’s water inside or around the socket.

In that case, reduce the risk of electrocution by switching off your home’s electrical supply at the mains. Then, switch off the socket and unplug the device once the connection is severed.

If for some reason you can’t access the mains supply, wear rubber gloves before touching the socket to reduce the risk of shocks.

Then, dry the inside and outside of the extension cord as thoroughly as possible to give it the best shot at recovering.

There’s still a chance there won’t be serious damage if you dry it out properly but the risk of breaking the cord is higher if it gets wet while plugged in.

If you see anything out of the ordinary when the liquid touches the plugged-in cord, sparks, smoke, burning smells, etc, take steps to neutralize the danger as quickly as possible.

Then, dispose of the extension cord. Do not attempt to reuse a cord that has sparked, produced smoke or emitted a weird odor. This is a clear sign that something inside has broken and probably can’t be fixed.

What To Do If Extension Cord Gets Wet

You should follow these steps whether your extension cord has been fully submerged or exposed to just a little bit of liquid:

Step 1 – First, don’t panic. This is especially important if your indoor extension cord gets wet while plugged in. Knee jerk reactions can be dangerous. Take a brief moment to assess the situation and whether it’s safe to touch the socket.

Step 2 – If you’re confident there’s no water on or around the socket that could pose an electrocution risk, switch it off. Fully unplug the extension cord. If you’re unsure, you can temporarily switch the electricity off at the mains and then unplug the cord. And/or wear rubber gloves to neutralize the risk of shocks when you touch the socket. The key thing is to stop electricity from flowing into the cord as quickly as possible.

Step 3 – Dry the extension cord as thoroughly as possible. To dry its exterior, wipe along the length of the cord with a towel or cloth. Rub the prongs until they’re completely dry. If you suspect water has entered the sockets on the cord, use a hairdryer (on the lowest setting) to blow as much moisture out as you can.

Step 4 – Now set the extension cord aside so it can continue drying for 2 to 3 days. You can speed up the process by positioning it in front of an electric room fan. Be patient. Don’t rush things. You must get all of the water out before you attempt to use it. The longer you leave it out to dry, the better the chances of it working when you plug it in again.

Are Extension Cords Safe In the Rain

Extension cords are only safe to use in the rain if they’re specifically designed for outdoor applications and have a wet rating.

These products have superior insulation and ensure electrical connections and circuits are damp sealed when the cord is plugged in.

If your extension cord has a wet rating and the manufacturer’s manual says it can be safely used outdoors, there should be no issues.

You still need to be very careful with the plug end. Regardless of a cord’s wet rating, you cannot get the prongs or mains socket wet.

The risk of injury increases significantly if you do not handle the electrical connection points safely.

It’s not an absolute rule so you should still check product descriptions carefully but, in most cases, outdoor extension cords are identifiable by their orange exterior.

If you see an orange cord, there’s a very good chance it has a wet rating and is robustly waterproof.

Some outdoor extension cords are red instead of orange. Most are brightly colored to distinguish them from standard black and white indoor cords.

Helpful Tips To Know If Extension Cord Gets Wet

Safety should be your number one priority. If you’re unsure whether a situation is unsafe, remove yourself from the danger zone and seek advice.

Think carefully about touching plugs and sockets when there are liquids around. Act decisively but always assess the danger.

Your safety is much more important than the health of a replaceable extension cord.

I hope I’ve dispelled the myth that water and extension cords can never meet without saying goodbye forever to the extension cord.

It’s important to avoid these situations because water and electricity can be an extremely dangerous combination.

However, accidents do happen and if you’re careful, you can take steps to minimize the damage. Extension cords that have been wet in the past should be treated with extra caution from thereon out.

Just because you can’t see any damage with the naked eye it doesn’t mean the circuitry hasn’t been stressed or strained.

As a precaution, avoid overloading and do not leave the cord plugged for more than twelve hours at a time.