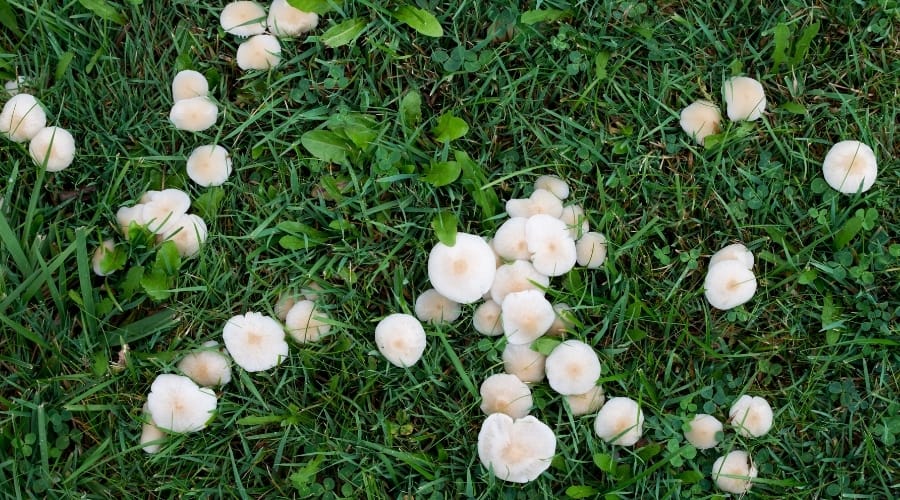 Many people think mushrooms are plants, but they are fungi which is an entirely different family. One of the biggest differences between fungi and plants is how they get nutrition.

Plants have chlorophyll in their leaves that convert sunlight to sugars they can eat, but what do mushrooms eat? I will share everything you need to know about these clever lifeforms and how they get their meals.

What Do Mushrooms Eat

Mushrooms are fungi that eat dead plants and animal tissues. Saprophyte mushrooms are the most common which feed on dead plant and animal matter. However, Parasitic mushrooms can eat living things like trees and even animals. By metabolizing organic material, mushrooms obtain their nutrition and also supply the earth with rich humus.

Although mushrooms aren’t the only decomposers that help break down organic matter, they are essential. Along with microorganisms and some insects, fungi help form a vital component of the circle of life.

You may have heard that plants are the cornerstone for all life because they provide oxygen, but plants couldn’t grow without humus to provide nutrients.

Fungi exist almost everywhere there is moisture. The land, air, the food you eat, plants, and animals are always engulfed in an invisible net of fungal spores.

According to Sciencelearn.org New Zealand, It is often hard or even impossible to see fungi because they are so small. Regardless, these incredible organisms live and eat in secret all around the world.

It is only when a given spore grows large enough to put off its ‘fruit’ that we usually notice them.

Most fungal spores are harmless, feeding off minuscule amounts of dead tissue and plant matter, and many never reach any substantial size.

Unlike their microscopic counterparts, however, mushrooms can be very toxic to humans.

There are about fifty thousand known species of mushrooms. Only one or two percent of these are poisonous, and some are medicinal.

However, there are only around six hundred and fourteen edible species.

How Often Do Mushrooms Eat

Mushrooms are ravenous eaters. When you are a human or an animal, you have to deal with your stomach, which helps tell you when to eat.

We eat more when we’re small to grow to adulthood, but still generally one to three times per day. Mushrooms don’t eat like animals, and their ability to spread when there’s plenty of food is virtually unlimited.

Plants, on the other hand, have no stomachs. Instead, they create sugars from water and solar energy in a process called photosynthesis.

That means plants are eating whenever sun or artificial full-spectrum light touches their leaves. However, mushrooms don’t use this system either.

Mushrooms basically never stop eating while they are active. In the cold, many fungal spores become dormant, eating little to nothing for months or even years if the weather is bad.

However, some mushroom species thrive in extreme environments and continue to eat year-round.

The fungus will not form the fruiting bodies (mushrooms) without at least a few hours of light per day, but otherwise, they only need organic material and moisture to survive.

How Do Mushrooms Get Their Food

There are two common types of mushrooms. Saprophytes are the most frequent, and they dine on dead plant and animal matter. However, parasitic mushrooms can eat living things like trees and even animals.

Anywhere living creatures or plants occupy space, fungal spores are around to take advantage. Most mushrooms use dead pieces of plants and carcasses to create a home.

They use this substrate, a layer on top of the earth that is always growing and changing, to spread and find food.

You may have noticed that there are more mushrooms in forested areas. The forest is densely packed with materials that can make up a perfect substrate for fungus.

Tree leaves, fallen logs, smaller plants, and animals that die are nutritious snacks for a mushroom.

In rare cases, mushrooms such as Arthrobotrys which, according to UCMP Berkley, “…snares nematodes on which it feeds. Nematodes are small tubular-shaped parasites that resemble worms, though the two are not closely related.

Many nematodes burrow into plants doing damage, so mushrooms that prey upon them can help plants grow in two ways: creating humus and reducing natural predators.

How Do Mushrooms Eat Their Food

Mushrooms are only one part of the fungi that ‘eats’ dead organic material. Although they don’t resemble them, mushrooms are the fungus’ equivalent of a beautiful flower or a piece of fruit.

Fungal spores live and grow in organic materials, spreading out and eating long before producing an actual mushroom.

Unlike animals, fungi don’t have mouths and stomachs. Mushrooms hyphae secrete digestive enzymes into the substrate where they grow.

By doing this, they can break down the material and absorb nutrients. This process causes decomposition, which is a fancy way of saying something is breaking up into tiny pieces.

Fungus and the plants nearby then ‘eat’ the bio-available smaller pieces. Nutrients are part of the makeup of plant fibers and animal tissue.

Every living thing uses some nutrients to grow, keep its cells functional, create defenses and other natural processes. Resultantly, when things die, those resources are no longer needed.

Fungal digestive juices make dead things back into ‘edible’ foodstuffs. This process is not unlike when we cook in a kitchen and then chew our food.

Human digestive juices also break down that material to make the nutrients bioavailable.

Mushrooms don’t use the bathroom like humans, but the waste material and unneeded substrate slowly becomes rich, nutrient-dense humus. Human and animal waste can serve a similar purpose, but we call it manure.

Mushrooms do eat grass, but they aren’t typically destructive to your lawn. A ring of mushrooms on the lawn may seem out of place, but they can be beneficial.

Lawns are full of dead organic matter like cut grass and dead bugs. It’s a feast for fungi.

Mushrooms are great for the grass. They will break down all those organics and turn them back into usable nutrients for the soil.

Helpful Tips To Know About What Mushrooms Eat

Mushrooms are incredibly diverse and resilient. What mushrooms eat barely affects their survival because spores can handle harsh environments. Plus, the food mushrooms eat would be toxic to many other species.

Here are a few more helpful tips about what mushrooms eat.

Like plants, mushrooms eat without the aid of a mouth. Fungus, which is found everywhere on earth, helps break down organic material after it has died.

Without mushrooms and other decomposers, our planet would be littered with dead animal carcasses and plant material piling up endlessly from the first thing that ever lived and died.

Every inch of land would be rock, silicates like sand, and metals covered in dead things that never broke down into the soil. The world we know would not exist.

What a simple mushroom calls ‘lunch’ is actually the ingenious basis for every thriving ecosystem on the planet.

link to What Do Backyard Lizards Eat

Lizards live virtually everywhere on earth, so you probably have them in your backyard. Some lizards can change colors to blend into their natural surroundings, which helps them hide from predators...

Continue Reading
link to How Often Do Butterflies Eat

Butterflies are one of those species that make do with what they have to get the proper nutrients. In fact, if there is nothing to eat, the butterfly will simply eject their stomach contents....