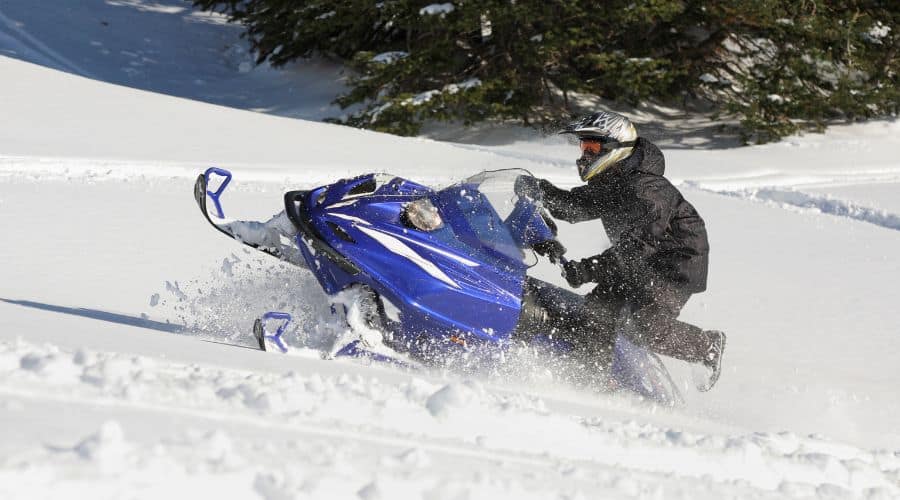 It might surprise you to learn that the reeds inside your snowmobile serve a similar purpose to the reeds in a musical instrument by restricting airflow. Originally instrument reeds were literally made from pieces of reed.

However, vehicle reeds can be fiberglass or other materials like carbon fiber or even metal, so long as they are smooth and flexible enough to form a good seal. What are snowmobile reeds?

Snowmobile reeds regulate the fuel-to-air ratio on your sled. The reeds go between the carburetor and engine in a reed cage that holds these one-way flow valves in place. The reeds’ unique shape and placement allow air or a fuel-air mixture, depending on your sled type, to flow past the opening in one direction while preventing backflow.

What Do Reeds Do On A Sled

Reeds on a sled do the important job of regulating the air or fuel and air mixture as it goes into the engine.

These essential parts prevent backflow and provide a steady source of a proper fuel-to-air mix to the combustion chamber.

Although some machines lack reeds, they make up a necessary part of the fuel regulatory system in most snowmobiles.

Reeds open in one direction. The vacuum pressure that remains after fuel gets burnt and emissions vented causes the reed to pull away from its opening, allowing more fuel and air into the chamber.

However, when filled, the negative pressure drops, and the reeds close again, regulating the engines’ fuel intake.

What Is The Purpose Of A Reed Valve

A reed valve is a specific type of check valve that typically restricts the flow of a liquid or gas in one direction.

In the case of snowmobile reed valves, they may regulate fuel and air, or in some cases, only the flow of air.

The reed valve is a complete component; the reeds are just parts that fit inside the valve to cover or uncover an opening.

As ClassyJapcycles explained so succinctly, “The reed valve is a device which opens under vacuum, allowing the fuel/ air mixture to enter the crankcase of a two-stroke engine. The vacuum is generated as the piston makes its upstroke. Then as the piston makes its down stroke vacuum in the crankcase changes to pressure, forcing the reed valve closed. This keeps the fuel in the engine and aids in pressure forcing the fuel charge up the transfer ports into the combustion chamber.”

Bad reed valves will interfere with how your snowmobile turns on, speeds up, and idles.

You can have almost no symptoms of bad reed valves, or you might experience all the problems on this list.

What Does A Reed Do On A 2 Stroke

Reed valves move fuel and air into the piston chamber on a 2-stroke engine. There are two types of reeds you may find in your 2-stroke sled.

Case reeds and cylinder reeds serve the same purpose but have significant differences.

While the configurations are similar, cylinder reed kits are slightly narrower. Cylinder reeds are limited because they take the intake port’s place and reduce the available space attached to the cylinder.

On the other hand, a case reed slots into the crankcase, giving designers more leeway with size. A more significant reed case means more fuel and air reach the engine.

Some 2-stroke engines, the piston port variety, don’t have reeds. For the others, the reeds allow air and fuel to flow into the combustion chamber at a specific rate.

So long as the flow moves in the correct direction, it proceeds unabated.

However, if the fuel or air tries to back up, it causes the reed to seal over the opening, guaranteeing you don’t have to worry about a backflow of possibly burning gasoline.

I recommend watching this short informational video from KT Performance for more information on case reeds and cylinder reeds.

The video shows you both case and cylinder reeds and where they fit inside the engine. You can clearly see the size difference.

They discuss why case reeds work better and how much of a difference having that added space makes for air and gas flow.

Pistons inside your snowmobile pump up and down. The top dead center is the highest or most open point, while the bottom dead center is closed and empty of everything but the piston.

When the piston reaches the bottom dead center, it starts to move back up, creating suction. The vacuum force of this opens a petal of the reed valve and pulls in gas and air.

Upon reaching the top dead center position where the piston valve is filled, the piston reverses direction, forcing the reed petal to close again.

The fuel and air mixture is then moved into the combustion chamber, where it gets burned and consumed, and the byproduct is expelled as exhaust. 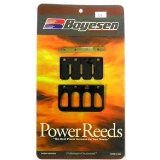 The style of snowmobile you ride and its build will determine what type of reed setup you need. I recommend the ARTIC CAT Snowmobile Power Reed Kit 700 from Amazon.

The Boyesen Power Reeds are well known for their longevity, outlasting their’ aftermarket competitors by miles.

These reeds offer more airflow. The dual-stage design lets you swap your stock reed stop with a Rev-Plate.

The Rev-Plate makes a significant difference by allowing the reeds to open and close more efficiently.

Customers rave that they are “Quick and easy” and have “fast shipping and excellent customer service.”

The style and durability of these reeds lead to increased horsepower. Better still, you get increased engine efficiency.

You can check them out right here to learn more.

Snowmobile reeds regulate air and fuel to the pistons in 2-stroke snowmobiles.

This simple, vacuum-activated process happens over a hundred times a second as this unique check valve supplies exact amounts of gas and oxygen to your engine.

Here are more helpful tips to know about snowmobile reeds.

Reeds in snowmobiles (or instruments) allow air, and sometimes fuel to flow unobstructed in one direction to fill a void.

In an engine, the reed is forced shut again once the piston chamber is filled, and then the piston pushes the gas and air into the combustion chamber.

All of this happens faster than you’d believe, often over a hundred times a second.

link to How Does A Snowmobile Transmission Work

Continue Reading
link to How A Snowmobile Clutch Works: (Explained)

A snowmobile has two different clutches that work together to transfer and regulate power from the engine, so it becomes energy to drive the track forward, and you move. Clutches are connected to the...