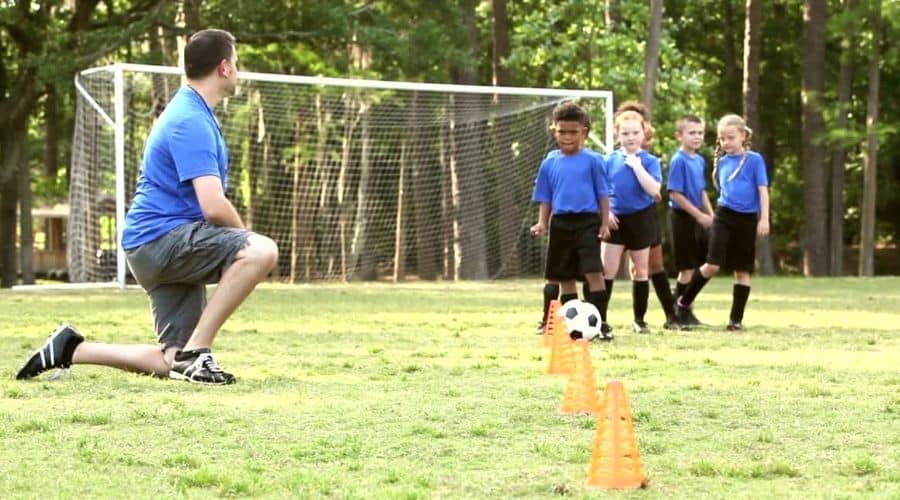 Getting started on sports early, like playing soccer in kindergarten, is a great way to build lifelong healthy habits and encourage teamwork. Little kids can work on their focus and improve motor skills by dribbling, passing, and doing other soccer drills.

Plus there are other benefits like good sportsmanship as well. What is the best soccer drill for kindergarteners?

The best soccer drill for kindergarteners is Mini-Goals because everyone gets a chance to play and try out being a goalie. In this drill, teams of 3 face off and the kids practice all their skills together, learning to share the ball, communicate, dribble and shoot. They will work on their coordination and sportsmanship as they play short matches.

There is always a ton to learn when you start a new sport, but soccer can be a lot to handle for kindergarteners.

Fortunately, setting them up with simple, repetitive, short-duration tasks like practice drills helps them learn all the various aspects of play they’ll need for game time in bite-sized pieces.

Unlike working with older kids, the exercises for kindergarteners tend to take less field space and focus more on the essential skills like aim and ball control.

Here are the top 10 soccer practice drills for kindergarten.

Some soccer drills are all about playing the game, but others are just an entertaining way to work on various skills. Either way, the fun is all in how you play.

The drills below offer young players a chance to be competitive or not based on what works best for your beginning team.

Mini-Goals is a 3-on-3 game where every team has a goalie and 2 players.

You need to set up mini fields only about 15 yards wide with 2 cones for a goal at each end.

Each group of 6 players is 2 teams, and they get 1 ball. You’ll need a whistle to start and stop the mini-games.

Rounds last 5 minutes, and then the players switch places until every player has been a goalie for 5 minutes, so your kindergarteners get to try out a simulated game and practice all their skills.

Set up a 20×20 grid for the players with cones and give every child a ball.

The goal here is a lot like regular Red Light Green Light, where kids work on their listening skills and follow directions, but in this drill, they do it while dribbling and avoiding other players.

RLGL helps with dribbling, fast and slow movement changes, awareness of their surroundings, and focus.

In this variant, players dribble the ball with either their left and right feet or the inside and outside of their shoes.

They will also stop the ball or push with their laces. The lights are red, yellow, green, and blue (for the laces push).

You can add a 5th light for very advanced players, which means passing the ball to another player.

Most kindergarteners have little to no experience with soccer. It may be their first time playing, and some haven’t even kicked balls around before at home.

Working on the most basic beginner drills is necessary, but there are many ways to make it more entertaining.

Set up a bunch of random cones that are relatively close together in a long, narrow ‘field.’

On either side, use a line of cones to denote the edges of the field of play. Every kid gets to dribble and work on dodging obstacles in this game.

The goal is to move from one end to the other, going around cones. If they hit a volcano, everybody (or just the coach) makes an exploding noise.

This simple, fun game helps little kids start to work on their ball control and aim.

You set up a box with cones big enough for the whole team to play inside and have some space to run around 20×20 or 30×30 should be fine. Then every kid gets a ball.

The goal is to kick the ball at the coach, but you can move around and dodge. You will need your whistle.

I recommend watching this video for a great demonstration of this game from Soccer Help.

Dribbling is essential, but it’s not a team sport if the kids don’t work together.

Plus, working together as a group encourages them to communicate and share better in other aspects of life.

The Zig Zag Zipper is a great way to build teamwork and include everyone in the same game.

All you need is 2 parallel lines of kids and 1 ball. Have them stand about 2 feet apart to start, and they will step back 1 step at the end of each turn.

The only rule is that they have to pass the ball around the triangle outside the triangle. Separate the cones for longer kicks.

As each kid passes, the receiver of the ball names a cartoon character. The only rule is that they can’t use the same character twice.

Dribbling is the first skill every player needs in soccer. Simply moving the ball around the field with your feet is the basis on which all other aspects of soccer are founded.

I recommend doing lots of different dribbling drills, but below are 2 of the best for your kindergarteners.

You can set up a smaller field of play like a 20×20 box or use the whole field if you prefer for this drill.

However, 1/2 to 1/4 of the field is usually plenty. Every player gets a ball, and the goal is to get the most tags, but a player cannot tag another if they don’t have their ball. This exercise helps with dribbling.

Only 1/2 of the players get balls in this version of Dribble Tag. Instead of tagging another player, you have to either play keep away or steal a ball from another dribbling player.

However, you can’t steal from the person who took your last ball, and you can’t take a ball from the same person twice.

Most teams use some variation of this drill regardless of age. You’ll need several straight rows of cones and 1 ball per row.

Set your cones about a yard apart so the kids can work on their dribbling skills.

Shooting requires aim and a lot of practice, especially when you’re in kindergarten.

Start the kids with no goalie at first to get used to taking the ball to the net and kicking it in.

You can make it more fun by placing a cardboard cutout of a pirate or a goalie or whatever you want inside the goal for kids to aim at or around.

There are plenty of fun ways to do this, but don’t overcomplicate it.

Have the kids line up perpendicular to the goal 2-5 yards out. Set yourself up directly across from the goal a few feet further back with the balls.

The idea is to have them run forward as you roll the ball and take a shot at the goal.

This drill will help with shooting and coordination and familiarize kids with the idea of kicking an already-moving ball.

In this drill, kids will pair up and take turns shooting. They will work on their passing, dribbling, shooting skills, coordination, and teamwork.

You’ll need to pair them off, but if you have an odd number, a team of 3 is fine. You will need a whistle.

Helpful Tips To Know About Soccer Drills For Kindergarten

Teaching soccer to kindergarteners is challenging and very rewarding.

It takes a lot of patience and hard work for these small people to get the ball where they want it since they are still working on other essential skills that older kids have already developed.

Here are a few helpful tips to know about soccer drills for kindergarten.

Kindergarteners who play soccer will have more stamina, focus, and overall better skills both on and off the playing fields than those who don’t.

This wonderful sport is ideal for little minds and bodies. Even though they can’t typically handle the advanced drills and concepts older players use, there are many great ways to teach soccer to the kindergarten crowd.

Now that you know the top ten best soccer drills for kindergarteners, it should be easier to help them focus, get coordinated, learn to set goals, become better players and teammates, and make friends.

Plus, they’ll surprise you with how quickly their pliable minds can grasp some drills. As long as everyone has fun, it’s a win.

Whether you're a seasoned pro or a first-time coach, soccer drills are essential for any team. Middle school players can do most exercises the adults do in practice, though you can't expect them to...