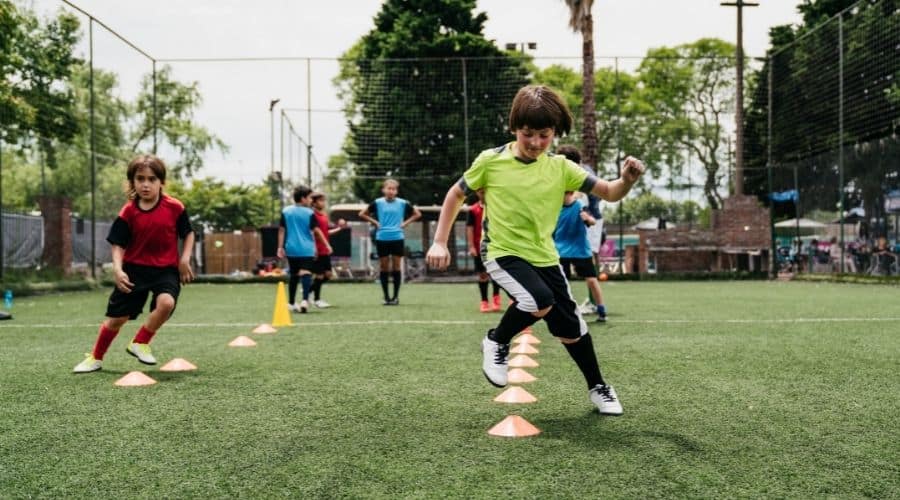 Soccer drills are an essential part of any team’s field time, but they are even more critical for young players like first graders. Older players have life endurance, coordination, and communication abilities little kids haven’t learned yet.

Luckily, soccer is the ideal way to develop those skills. What is the best soccer drill for first graders?

The best soccer drill for first graders is 4V4 because players can use all their skills together in quick games. Coaches get to see how well different players work together and learn where the team and individuals need to work on improving the most. Doing this drill will help you decide what other drills are most important to work on.

First graders are usually 5-7 year-olds. They are more advanced than their kindergarten and pre-k companions but still have a long way to learn to control their bodies and communication.

Playing soccer is a great way to work on coordination, stay healthy, remember to be good sports, and work on teamwork and communication skills.

The ten soccer drills below can help any team or group get better at soccer, but those skills will also translate into other aspects of their lives.

Having a good time is critical for young sports players. To keep them interested and help them learn, it helps to laugh and play games as a part of your exercises. Below are the top 2 fun soccer drills for first graders.

In this competitive game, kids learn to defend, make critical decisions, keep their heads up, dribble, aim, and shoot while having fun.

The idea behind the drill is to have players try and knock each other’s balls out of the play area.

To keep it fun and have everyone stay involved, the out players get their ball and do five jumping jacks before rejoining the game.

Variation- Swipe: Half of the players start with no ball in this version. Instead of knocking a ball into a ball, they try to steal a ball from another player. Anyone who gets their ball kicked by another player has to run and do the jumping jacks.

Soccer Freeze Tag is a lot of fun, especially for first graders who love to run around. This drill will help them work on dribbling and keeping their heads up.

You’ll need a ball for every player, some cones, 1-3 pinnies, or another way to tell who is ‘it.’

Tip: It is not a good idea to have players ‘tag’ each other with the ball since it leads to many accidents and occasional injuries. Make sure they understand that a tag is a gentle tap with your hand.

The best soccer drills for first graders are those where they either use all their skills together or build endurance.

Even though kids run around and play a lot, they typically aren’t accustomed to running back and forth on a large soccer field.

The two drills below help kids practice, focus, communicate and work on their endurance to be better players.

First graders are ready to start playing semi-serious mini-games against each other.

An excellent way for kids to practice all their skills together is to form teams of 4 players and have them play short games against each other. This drill helps players with every aspect of soccer play.

Moreover, it’s great for working on endurance, and the whole team can play together. All you need is a ball for every kid.

Variation- Relay: You can easily set up the Little, Little, Big race as a relay. Have kids form teams of four and hand out pinnies to each group, so they match. Then set them up so each player runs an equal distance and then passes to the next.

There are two ways to approach teaching beginners. You can put together activities that make them learn multiple skills or focus on one aspect of soccer at a time.

The two drills below represent both ends of that spectrum.

This drill helps with defense, dribbling, keeping their heads up, ball control, and focus.

In Escape, you have two teams to start, one with and one without balls. Depending on how many first graders are playing, you’ll use half the field or less.

The kids with the balls have to escape from the ones without.

Tip: Encourage the jailers to work together or set them up in pairs so they can’t go after all the escapees at once. Doing this promotes teamwork and communication.

Variation- One-Ball Escape: In this version, the escapees only get one ball between them, and they have to get it to the other side of the field, but they start on one of the shorter sides of the rectangle and have further to run. Doing this will help with passing and team communication, and group defense.

This drill is purely for teaching ball control, dribbling, and building some basic endurance.

You’ll need a lot of cones and a ball for each first grader to kick. The goal is to have them go in and out of the cones in a zig-zag pattern.

Variation- Race: You can have the teams race to see who can get everyone back first.

Learning to pass the ball well takes skill and excellent communication. Young players need to keep their heads up and be aware of other players nearby.

For first graders, you need simple, fun games to pass that promote working together and don’t take too long.

Gates is a drill that requires cones and balls. Players work in pairs running together, working on communication, aim, and passing skills.

Optional: Use pinnies in matching colors for each pair to look and feel more like a team.

In this drill, players learn patience, communication, and passing skills. You’ll need 2-4 balls and a few cones to mark a 30×30 square to play inside.

The goal is to stay ‘frozen’ in a silly position until someone passes you the ball, but the kids with balls only have until the count of ten to pass before they have to freeze.

Scoring, or shooting, mainly involves kicking a small ball into a large goal.

Unfortunately, this isn’t much of a challenge, even for first graders, since the goalies tend to be relatively unskilled. The trick for coaches is to make it fun.

Zombie Catch is a shooting game that has more than one goalie. Players learn to anticipate and intercept flying balls, which helps them practice shooting.

You’ll need a full-size goal, or you can mark out a 20×20 foot space with cones.

Kids will love this drill because they get to kick balls at the coach or coaching assistant. The adult is the goalie, and every kid gets a ball.

The goal is the ‘monster cave,’ and the monster is a moving target inside.

Not only will this help them shoot and aim, but it also builds camaraderie and helps them work a little on endurance with some dribbling back and forth.

Tip: Don’t dodge too much. They are little kids. The roaring is half the fun, and the players will feel better and play harder if they hit the target more.

Helpful Tips To Know About Soccer Drills For First Graders

First graders are capable of more than younger children, but they are still learning how to control their body movements. The best way to get them through drills is to disguise than as games.

Here are more helpful tips to know about soccer drills for first graders.

Coaching first graders is hilarious and highly rewarding if you know what you’re about. There are a ton of valuable and fun drills for them to do that are also games.

The best exercises for first graders help them work on multiple skills at once and make them laugh, sing, or yell as they play.

Remember to switch things up often, layer on the praise, offer helpful suggestions, and don’t be afraid to add your own fun twist to any of these drills.

Getting started on sports early, like playing soccer in kindergarten, is a great way to build lifelong healthy habits and encourage teamwork. Little kids can work on their focus and improve motor...