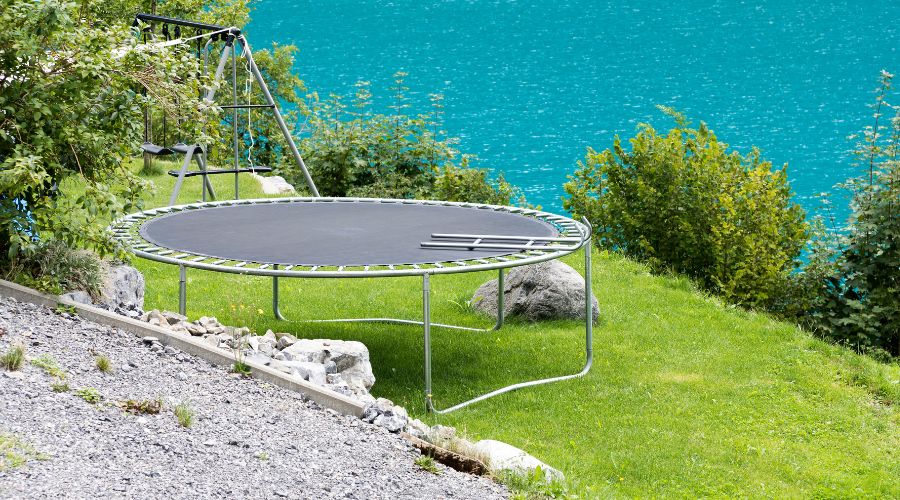 Trampolines come in a huge variety of sizes, shapes, styles, materials, and, most importantly, weights. The smallest mini trampolines are around 3 feet in diameter with extremely light aluminum frames, and the world’s largest trampoline is 40×40 feet and weighs well over 1000 pounds.

How much does the average trampoline weigh? It depends a lot on size and frame materials, but read on, and I’ll explain everything you want to know.

How Much Does A Trampoline Weigh

There is no single answer for how much does a trampoline weigh, but you can get a good idea of the range based on the size you want.

Square and rectangular frames often weigh more than their round counterparts because it takes more metal to make the top portion of the frame.

Likewise, you’ll find that models with more legs are heavier, which is a benefit because they are also more stable and bottom-heavy.

Additionally, aluminum frames weigh far less than their galvanized steel counterparts, but they also break, warp and bend more easily due to the softer metal.

How Much Does A Trampoline Weigh In The Box

Trampoline frames and mats are heavy, though each individual piece is manageable before it’s assembled, and typically you can lift and move a backyard trampoline with the help of 1 to 3 other people.

The weight of a trampoline in the box depends on the size, style, and how heavy duty the cardboard is for the box itself, but most models weigh between 94 and 205 pounds.

Below is a chart with the weights and dimensions of various trampoline models.

How Much Does An Average Trampoline Weight

Rather than averaging all the trampoline sizes together, which would give you a skewed idea of what a trampoline weighs, I am using the most commonly purchased 8-foot trampolines to represent the average.

Since these models are cost-effective but still offer a large bouncing surface, they are the most sold size. A typical 8-foot trampoline weighs between 94 and 100 pounds.

How Much Does A Mini Trampoline Weigh

A typical mini trampoline weighs between 10 and 30 lbs. The most significant difference isn’t the frame size; it’s the features.

A mini trampoline with a balance bar addition or an extra set of legs for angled rebounding weighs a little more. Likewise, folding legs tend to be about 1 to 3 lbs heavier than the screw-on variety.

These small trampolines are usually 3 to 4 feet and are more likely to come in aluminum frame options than their larger counterparts.

More importantly, it’s safer to use the lightweight versions of these trampolines because they are low to the ground and have short, sturdy legs that can handle the pressure of jumping easily, even when made from a softer metal.

How Much Does A 10Ft Trampoline Weigh

A 10-foot trampoline weighs 94 to 100 pounds. The lighter models are round or have only three wide legs.

Meanwhile, heavier models are squares or rectangles, or the styles with more legs for better stability because it takes more metal to make them.

A curved net pole design will add a few pounds to any trampoline because it takes more material to create a curve of equal height to the straight equivalent.

Still, it’s worth investing in a trampoline with outward bending net poles because the net hangs inside them instead of attaching directly to a bar that is close and easy to jump into.

How Much Does A 12Ft Trampoline Weigh

The bigger your trampoline gets, the more material it takes to make the frame, poles, mat, and other parts.

Every little bit adds up, so a few extra springs and inches make a major weight difference.

How Much Does A 14Ft Trampoline Weigh

A 14-foot trampoline will easily weigh 145 to 200 lbs because of its sheer size.

Furthermore, the more giant trampolines often come with taller legs and ladders, and many have basketball hoops. The more features, the greater the weight becomes.

At this size, a cover, lights, or sprinkler feature will weigh up to three times what it would for an 8-foot model because there’s so much more distance around the edges.

How Much Does A 15 Foot Trampoline Weigh

A 15-foot trampoline is the largest size most people have in their backyards. You can get larger specialty models, but this size is readily available to anyone on most websites or in stores.

If the weight listed is much less than that, be suspicious. Having a steel frame on the bigger trampolines is essential because they are more likely to see multiple jumpers and frequent use.

Most people don’t buy a giant trampoline on a whim, and these are used for incredibly active lifestyles, sports training, and more.

How Much Does A Springfree Trampoline Weigh

Springfree trampolines are heavier than similar models of regular trampolines.

Safety has a cost; in this case, it’s added weight for all the fiberglass poles and extra frame parts that prevent you from needing dangerous traditional springs.

Why Do Trampolines Weigh So Much

Trampolines weigh so much because they must be made from heavy-duty materials to handle repeated impacts from people bouncing.

There are usually 8 parts to most trampolines. Some components weigh very little, and others, like the frame, are immense, heavy, and may be made up of numerous smaller parts that you put together.

While most trampolines only consist of the 8 components above, you may also have a ladder or other accessories that add to the overall weight.

Some trampolines come with a basketball net or a cover. Others have sprinkler systems, lights, and play features.

I did not include the weight of those parts because those are deluxe, upgraded models rather than the average versions most people prefer.

Helpful Tips To Know About How Much Do Trampolines Weigh

Trampolines look light and make you feel like you’re weightless, but they are surprisingly heavy.

A good-quality trampoline has a galvanized steel frame made of numerous hollow tubes, but even hollow, they still add up quickly.

Here are some helpful tips to know about how much do trampolines weigh.

There’s a trampoline out there for everyone. Whether you want an aluminum framed, indoor, 10-pound mini trampoline, you can put inside a portable bag and carry on your shoulder, or you need to have the 16×24 Goliath that weighs over 650 pounds before you install the enclosure.

You can expect most backyard trampolines to weigh around 100 to 200 pounds. Larger and smaller models naturally vary. Additionally, an aluminum-framed trampoline is much lighter.

However, I do not recommend aluminum frames on any trampoline size except the mini, as they are not as durable and hold far less weight than their galvanized steel counterparts. It’s worth the extra lifting for a long-lived, safer product.

link to What Are Trampolines Made Of: (Complete Guide)

In the USA alone, people buy over 500,000 backyard trampolines yearly, but they aren't all equal. Varying styles and materials mean that some trampolines don't last as long. Choosing a...

You can set your trampoline up with nothing underneath, which leads to a lot of wasted space, which is why you need an under-trampoline solution. There are plenty of options so you can fit a...