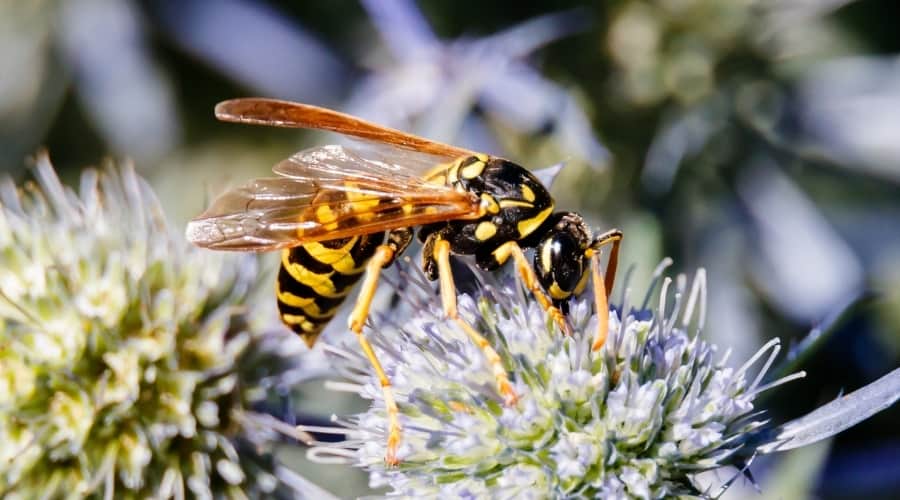 Wasps can be found everywhere on earth except Antarctica. These colorful fliers often get a bad reputation because they can repeatedly sting, unlike bees, and attack if startled or provoked.

However, Wasps also eat bad insects and can be beneficial to farmers and gardeners. How long can wasps live without food, though? I did a deep dive into wasp’s life cycles and their eating habits.

Wasps can live for 2 days up to several weeks without food. Although, most wasps will die of starvation in roughly 72 hours, it depends on factors like species, class, age, weather, diet, and how recently they ate. A wasp can even survive without its head until it starves due to their unique biology.

How Long Can Wasps Survive Without Food

People often ask this question because they are hoping a wasp that flew into the house will perish quickly on its own. Sadly, that’s an unlikely scenario.

Wasps will survive days or weeks before they starve. However, if you can identify the species, it will help you narrow it down.

Wasps that have eaten recently will obviously survive longer without food because they start with a small advantage. Additionally, their diet matters because there are two main categories of wasps.

First, wasps may be carnivorous or insectivores and eat mostly meat.

Second, some wasps are pollinators and rely on sugar as the majority of their food. Typically, it is only the larvae or baby wasps that eat meat.

Wasps who subsist mainly on sugars have a higher metabolism. Like bees and hummingbirds, the sugars keep them going so they can live very high-energy lives.

Fortunately, that also means sugar-craving wasps will typically die sooner. These are the species that might pass away in just a day or two with no food.

Meat-eating wasps have a calorie-dense, more filling diet. They are likely to eat less often in nature and will naturally survive longer between meals as a result.

Additionally, due to their slower metabolism, they will starve much more slowly. A carnivorous wasp may not even process all of its last meal before a sugar-wasp needs to eat again.

Wasps are temperature sensitive. If it gets too hot outside, a wasp will dehydrate faster. It will also run through its stored calories faster. Wasps that overheat can die in a day or less.

Alternately, a wasp can have two different reactions to the cold. If the cold is sudden and extreme, the wasp will die quickly as they fail to adapt.

However, especially if you have a queen wasp capable of overwintering in hibernation, they may simply go into a dormant state.

Lower metabolism can make them inactive, which looks a lot like being dead, but it’s not the same thing.

Dormant, hibernating wasps can last months without food, only to eventually wake up again.

A worker wasp and a queen wasp are very different. The workers live shorter, more energetic lives and die after just a few months.

Meanwhile, the queens will live for several years. As a result, queens are also more likely to survive for a longer period without food.

It’s best to get a wasp out of your space as quickly as possible. If it is flying around, try pulling the curtains and turning off inside lights.

Then open a window or door to draw the insect outside. However, scoop it up with a cup or piece of paper and take it out if it looks dead.

How Do Wasps Survive Without Eating

As the seasons change and winter sets in, most wasps do not survive because they no longer eat. Food becomes scarce, and most workers will pass away naturally.

Typical workers only live around six weeks anyhow, and they spend most of their lives collecting insects or nectar.

Because they spend most of their time collecting food, workers tend to be well-fed themselves.

A worker doesn’t store as many calories as a queen, but wasps are usually successful creatures who have little trouble sustaining their lifestyle. Whether it is flowers or insects, their food is easy to gather.

The queen, sometimes called a ‘queen bee,’ is the ruler of the wasps’ hive, and her life is different from that of the workers.

She is usually the largest, oldest, and most formidable. Additionally, queens store energy from eating for most of the year to lay eggs and survive hibernation in the winter.

Just as bears and other animals pack on the calories so they can last months without getting up to hunt for food, queen wasps do the same.

They will find a nice place to hide in some bark, a small burrow, or another conveniently sheltered location as cold weather arrives.

The queens’ body then slows down internally. Her metabolism will burn far less fuel as she enters a torpor.

When spring thaws hit, the queen, known as a ‘Foundress,’ will emerge and choose a new location for her hive. They never return to the same spot twice.

How Long Can A Black Wasp Live Without Food

A Great Black Wasp is very different from most species of wasps. Rather than living communally in large hives, these wasps are mostly solitary and are not aggressive.

The males don’t possess stingers and live only to mate. Meanwhile, the females spend their days eating nectar and killing insects to feed their voracious larvae in their underground dens.

Because of their size, measuring 1-1 ½ inches long, and their sugar-based diet, a Great Black Wasp will not survive long without food. These peaceful wasps will die off indoors within two to six days on average.

How Long Can Paper Wasps Live Without Food

Paper wasps can spell trouble. If a colony of paper wasps sets up residence indoors, they can survive for months.

However, the individual wasps will die in about ten days when cut off from food and water sources. Contrary to popular belief, paper wasps do not eat wood or paper but rather collect it to take home to build a nest.

Paper wasps eat nectar and pollen as adults. However, they also hunt insects, particularly caterpillars, to take home for their larvae.

That means the adults are sugar-wasps, and even when well fed, they will likely die off faster than carnivorous wasps.

How Long Can A Queen Wasp Live Without Food

A queen wasp can live for several months without food, but only when it is sufficiently cold. Since queens hibernate, they will survive for longer anytime it gets cool enough for them to become dormant.

However, if it warms up too soon, or if the place they are trapped becomes suddenly warmer, they may emerge and starve within days or weeks instead.

Helpful Tips To Know About How Long Wasps Live Without Food

Wasps may be a problem when aggressive, but they are also pollinators who help keep our plants alive. Dealing with wasps outdoors can be detrimental to your garden’s health.

However, wasps that get inside are nothing but trouble waiting for a place to happen.

Here are some helpful tips to know about how long wasps live without food.

Wasps are incredibly diverse, and each variety has its own quirks, ecological niche, and capabilities. However, they also have a lot in common.

Though sugar-eating wasps will die faster generally, don’t assume a wasp will die in a day or two. Some species can survive weeks on no food.

Whenever possible, try to get the wasp out of your home, whether it is dead-looking or alive, to prevent yourself, family, friends, and pets from getting stung.

link to How Long Can A Monarch Butterfly Live Without Food

Monarch butterflies smell with their antennae and taste with their legs and feet. These lovely creatures are surprisingly strong, traveling over three thousand miles to stay warm in the winter....

Continue Reading
link to How Long Can Snails Go Without Food

Snails are incredibly resilient creatures that have been on earth for around five hundred million years. They have not changed much in all that time, though they have adapted to survive in various...