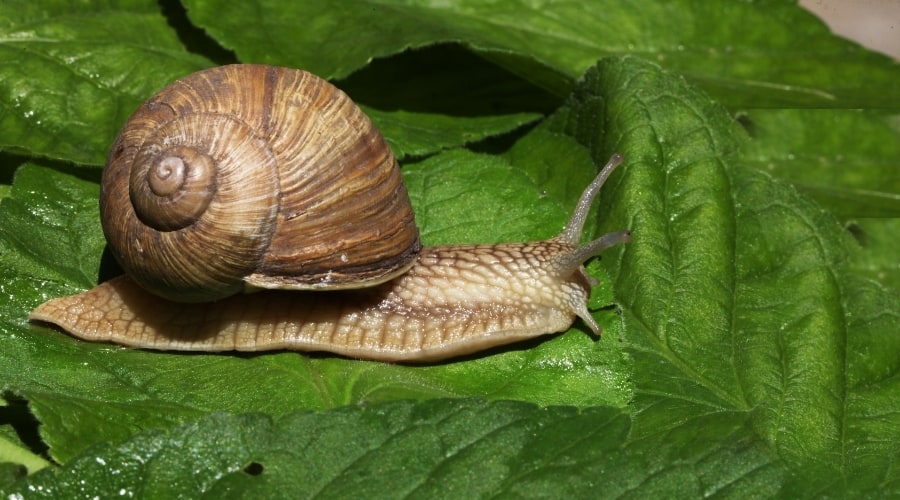 Snails are incredibly resilient creatures that have been on earth for around five hundred million years. They have not changed much in all that time, though they have adapted to survive in various environments.

Some snails can go a long time without food, up to eight months. I will share some of the secrets that allow snails to get through tough times when there is very little food to go around.

How Long Can Garden Snails Go Without Food

Garden snails can last weeks without eating. However, they don’t normally skip meals. When they are in hibernation or aestivation, garden snails don’t require snacks to stay alive.

Aestivation is almost the opposite of hibernation. A snail will stop eating for months or years to avoid the cold.

However, aestivation is a tactic for avoiding dry seasons. An aestivated snail can prevent itself from drying out and dying by sealing themselves to a surface with their mucus. Naturally, while the snail is sealed in, they don’t come out to eat.

Do Garden Snails Eat Every Day

Garden snails eat ten percent of their body weight in vegetable matter every day. It may seem like a lot for a little snail, and that much would certainly make a human gain weight rapidly, but it works for them.

At least garden snails don’t eat like hummingbirds which can consume one and a half to three times their weight in nectar daily to stay alive.

Garden snails are not picky eaters. Most sources of vegetable matter look like a meal to a snail. A few species are even omnivorous or carnivorous, but not the simple garden snail.

How Long Can Freshwater Snails Go Without Food

Spike-Topped Apple snails are a common freshwater tank snail. These popular and colorful snails are found mostly in pet shops and live naturally in Florida and South America.

Like other snails, they need to eat daily but can survive for several weeks without food in an emergency. Hibernating snails can go the longest without food.

Since it rarely freezes in Florida, it’s safe to guess apple snails don’t hibernate for long, if at all.

Their bodies are less adapted to long periods of surviving without eating, so they probably won’t last as long as Radix Auricularia, an exotic species found in Alaska’s Kenai peninsula. In extreme cold, snails can hibernate for up to three years.

There are numerous varieties of freshwater snails. Unsurprisingly it is frowned upon in scientific communities to starve creatures for science to see how long they last before they die.

As a result of these two seemingly unrelated facts, it can be hard to pin down the exact amount of time every freshwater snail can go without food since it hasn’t been studied.

That said, you can safely assume that most freshwater snails can go without food for at least one to two weeks.

How Long Can Giant African Land Snails Go Without Food

Giant African Land Snails are one of few species to be studied without food. Although this sort of research is generally considered taboo, there is a specific answer in this case.

According to Scholarspace in Manoa Hawaii, the Giant African Land Snail (Achatina Fulica) can survive an astounding 5 to 5 1/2 months without food when conditions are harsh.

While much of Africa is lush grassy savannas and jungle, nature is harsh. Fires can decimate an environment leaving many creatures, including the Giant African Snail, with nothing to dine on until it grows back.

For some creatures that might spell death, but these hardy snails can hold out through the mild African winter and even wait through part of spring before they need to eat again.

How Long Can Milk Snails Go Without Food

Milk snails are unique and often beautiful. Regrettably, not much research has been done on this species.

However, it is safe to say that a milk snail can go without food for about a week. This is the general minimum across many species of snails.

It’s theorized that snails may even be able to recognize their owners or people they are around frequently. While snails don’t have eyes to see you with, their olfactory sense (smell) is outstanding.

When you keep milk snails, they probably know it’s you coming to bring their meals.

How Long Can Mystery Snails Go Without Food

Mystery snails are not a species with a particularly patient stomach. When you introduce a Mystery snail to a new environment, it may cause stress.

This species will ‘play dead’ when it is afraid and can do so for two or three days without moving.

Typically, a Mystery snail sleeps about thirteen hours and then becomes active, moving and eating for the next thirty hours.

Snail circadian rhythms are very different from humans. There’s no reason to fear that your Mystery snail has died if it isn’t moving. Plus, you can check by attempting to move them gently.

If the snail comes unstuck with little to no pressure or smells bad, that is a dead snail. Otherwise, it may be ill, too cold, or feeling stressed out, so it is in its ‘happy place’ and hiding from any troubles.

How Often Do Snails Need To Be Fed

The species, environment, and other factors can affect how much your snails need to be fed.

I’ve provided a quick reference guide below for feeding land and freshwater snails. However, keep in mind that your snails may need more to eat.

Did you forget to feed the snails in your tank? Accidents happen, and you’re in luck. Missing a day or two is no big deal for this small creature.

They may try to climb out of the tank if they find the environment inhospitable, such as when there’s no food. Plus, they will be hungry, but otherwise okay.

It’s best to feed your snails daily. They can go without food for at least eight days if they are healthy and well-fed, but it doesn’t mean they should go without food. Be a responsible snail keeper and set the alarm to remind you next time.

If you’re seeking an easy to care for snail, Nerites are often found in freshwater tanks. While some owners feed this species daily, those with aquatic plants, algae, and diatoms may allow the snail to eat naturally.

In this case, the snail is getting food, but you may be able to avoid feeding it.

Snails are long-lived survivors. Most snail species can live ten years in the wild, but some can survive over twice that long.

In fact, the Helix Pomatia can live as long as a horse as long as they have enough food and water, and the climate is reasonably forgiving. Here are some helpful tips to know about snails and their food.

Snails are incredible creatures. How long a snail can go without eating depends on its species, but it’s usually at least as long as an average human.

Typically, a snail eats a lot of food for its size, but during hibernation, it will go without to avoid freezing in the cold.

More important than food, snails need water to stay alive, so keep plenty of water around if you plan on having healthy pet snails.

link to Do Snails Poop

Snails are herbivores, so they eat anything from leaves and fruit to mushrooms. If a snail can’t find a living plant, it will also eat ones that have decayed. After all the food they eat, do snails...

Continue Reading
link to How Far Can A Snail Travel