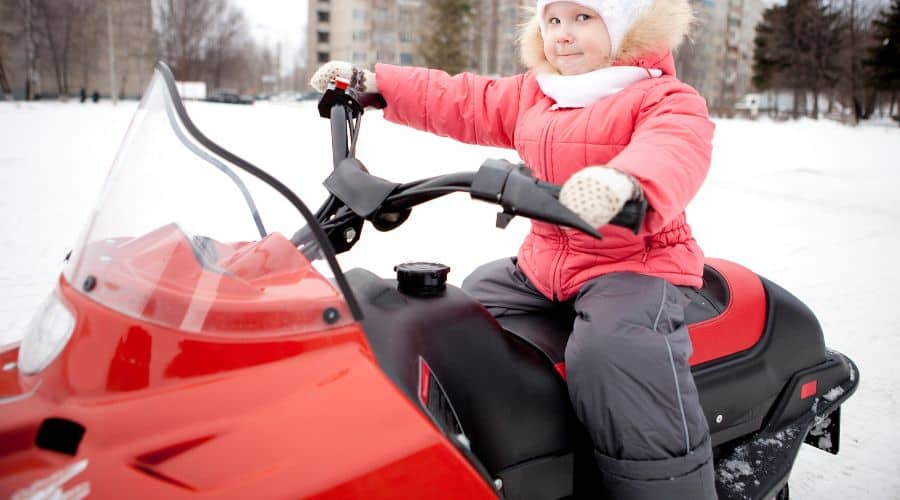 The 120 snowmobile is sometimes called a ‘toy snowmobile’ because of its size. Although these smaller sleds are often up to 6 feet lobut 120s are built lower to the ground. Toy snowmobiles are slower and less bulky.

With less weight, a long base, and a smaller engine, these sleds are ideal for young learners who are just starting. How fast does a 120 snowmobile go?

A typical 120 snowmobile goes around 6 to 10 miles per hour, because they are small and typically made for kids, so it doesn’t go very fast. This size of snowmobile is best suited to children 6 to 12 years old and cannot reliably hold most adults.

How Fast Is A 120 Snowmobile

Since snowmobiles labeled ‘120’ are made for kids as young as 6 to start learning to ride a powered sled, they can’t move quickly.

Naturally, you don’t want these sleds to go 50 or 100 mph with your kids on them. A 120 snowmobile is fast enough to be hard to catch on foot at 6 to 15 miles per hour maximum.

How Fast Does A Polaris 120 Snowmobile Go

A Polaris 120 snowmobile will go up to 8 miles per hour. The Polaris Indy series is the slowest snowmobile the company makes, at just 6 to 8 mph.

This may not seem very fast, but it’s ideal for teaching your kids since the average adult can run 6 to 8 mph even if they are not athletic.

The Polaris 120 has been sold under more than half a dozen different names, though it is essentially the same machine.

Whether your 120 is the XCR, ProX, Indy, Assault, Pro R, Dragon, or Youth model, it is very similar to other Polaris 120s over the years.

What’s Under The Hood

One significant difference in Polaris’ 120 line came after 2014 when these small sleds got the “indy” name. Previous model years had a 4-stroke Fuji engine.

However, after they became ‘Indys,’ these excellent small sleds gained an in-house engine that is an air-cooled, 121cc, 4-stroke single and utilizes a Mikuni BV-18 carb.

A 120 is speed-restricted for young riders for practical safety reasons. You don’t want new learners, especially very young children, to be able to speed too fast at first.

The 4-stroke 1-cylinder engine Polaris puts into its toy sleds is more than enough to get six feet of machine and a small child moving 8 mph.

That may not seem like much at a glance, but let’s look at it from a different perspective.

Astronauts typically experience 3Gs of force during launch and reentry. At only 8 mph, you can experience over 8 Gs of force in less than a quarter second if you crash.

Some models also come with a tether, so the motor disengages if your child falls off.

How to Make a Polaris 120 Faster

If you are tech-savvy and willing to accept responsibility for the risk involved, you can bypass the speed governor.

You can disable the speed governor with a simple zip-tie. However, mod kits are also available, and modified 120s are often used in kids racing.

This Video from Jason Asselin shows a pair of young riders on modified Polaris 120s. As you can see, without the speed inhibitor, these little machines can really move.

The Arctic Cat ZR 120’s top speed for a stock model is 8 mph. Like other 120s, this low, sleek snowmobile is made for child-sized riders and early learning.

At this size, a sled is more like a battery-powered ride-on car than an adult snowmobile.

What’s Under The Hood

The Arctic Cat ZR 120 sports a fan-cooled, 123cc, 4-stroke engine. Youth sleds are lighter by default since manufacturers don’t use as much material making seats and other components to scale for children.

With a dry weight of around 167 lbs, these smaller sleds’ single-stroke engines are great for zipping around the yard.

Where Does the Speed Come From

Even with an older child rider, the engine can easily keep up the speed.

Moreover, the Arctic Cat sits low to the ground but also has an aerodynamic front end that helps your young learner cut through the snow and the air.

All you need to make your Cat ZR 120 a little faster is some heavy gauge wire or a zip tie. The governor spring that inhibits further acceleration can be ‘locked’ in place.

You simply tie around the spring itself to prevent it from expanding and limiting the speed.

However, these are still small engines and will likely not go over 12 to 15 mph, even downhill, unless you change a lot more than the flexibility of a spring.

The Yamaha SRX 120 can reach speeds up to 8 mph when it is stock from the factory. Like other sleds, you can upgrade some parts for faster riding.

However, these specially designed children’s sleds do not have as many customization options as their full-size counterparts.

Getting Up To Speed

Yamaha is well known for producing outstanding small engines. In fact, getting up to speed with a Yamaha engine is something most other snowmobile companies have done at some point, even if they don’t currently use them.

A lot of thought and design time went into the speed control for Yamaha’s 120s. The plastic skis have the perfect keel for easier handling and steering.

There are hand warmers to keep little fingers in control. Plus, the governor control is made so you can adjust it.

How To Make A Yamaha SRX 120 Faster

To make a Yamaha SRX 120 faster, you only need to open up the hood and adjust the governor control manually.

With no restrictions, you can get this model up to 13 mph at its top speed.

Helpful Tips To Know About How Fast A 120 Snowmobile Goes

Snowmobiling isn’t exclusive to teens and adults. With a smaller 120 snowmobile, your little ones as young as 6 can join in on the fun.

Here are a few helpful tips to know about how fast a 120 snowmobile goes.

A 120 snowmobile, sometimes known as a toy snowmobile, is made for younger children and small riders who are learning.

In most cases, the governor springs inside these smaller sleds keep them from going over 8 mph.

You can zip tie the governor spring to prevent it from stretching open and get some unmodified 120s up to 15 mph.

However, the slower speed is a benefit as toy sleds are meant to have adult supervision. By keeping kids’ sleds slower, they can have fun and work on their skills at a speed parents can catch up to on foot.

Snowmobilers suffering the effects of the aging process need a sled that accommodates sore joints and decreased strength. Posturing and arms distance from the handlebars helps combat fatigue. The...

Continue Reading
link to How Fast Does A 1000cc Snowmobile Go

Snowmobiles are relatively low to the ground and streamlined with powerful engines, so they go faster than most people realize. Getting over 100 mph on most 1000cc snowmobiles is no problem. You can...