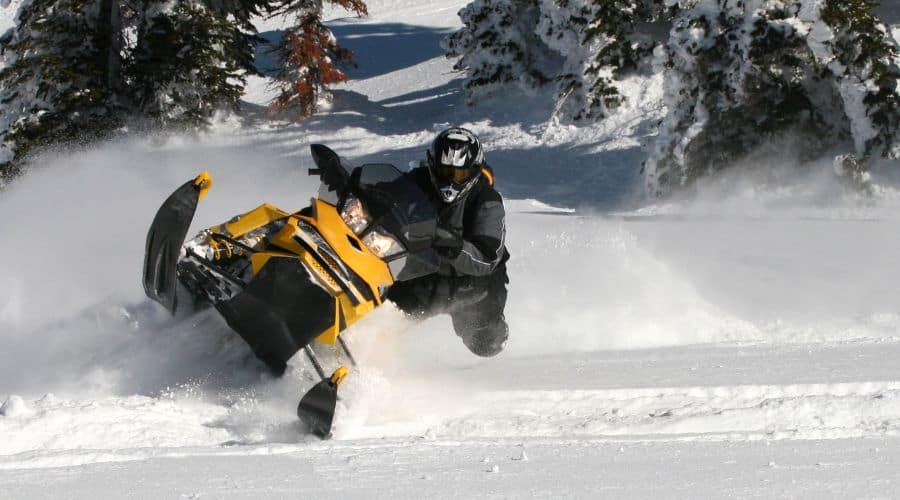 Snowmobiles are relatively low to the ground and streamlined with powerful engines, so they go faster than most people realize. Getting over 100 mph on most 1000cc snowmobiles is no problem. You can go faster in the right conditions.

How fast does a 1000cc snowmobile go? I’ll break it all down and explain how to get the most power out of your 1000cc sled engines when you need more speed.

A 1000cc snowmobile can go up to 120 mph over flat ground, in ideal conditions. The average top speed for most snowmobiles is between 70 to 120 mph, with the 1000cc snowmobiles being the fastest. The 1000cc engines are the best racers out of the commercial sizes, but they are also the hardest for many riders to control due to size.

A 1000cc sled is fast enough to go at least 120 mph in most cases. However, there are outside influences that affect your top speed.

For example, going downhill with a wind at your back will always be faster than your maximum speed heading uphill with the wind in your face.

One thousand cc snowmobiles are among the fastest options, especially when shopping for stock model snowmobiles.

That said, most people have an easier time on a smaller snowmobile, like an 800 or even a 600.

Either of these can also go over 100 mph on lighter sleds and can almost keep up with their massive 1000cc cousins.

The weight and build of your particular snowmobile model also naturally influences its speed.

The rating on your engine, for example, 1000ccs, indicates how much fuel and air it can handle by volume.

What makes a 1000cc snowmobile go fast is the ability to displace a full liter of the fuel-air mixture.

More fuel burning means more power going directly into your track to propel you forward, and a liter at a time is enough to make even heavy sleds speed past.

However, the rider and designer of the snowmobile have a lot of say on how much speed you’ll get out of that 1000ccs.

Depending on your engine setup, a standard 1000cc snowmobile will get anywhere from 80 to over 300 horsepower.

Your 2-stroke engines have the most power as Global Yamaha explains, “Because combustion takes place with each revolution of the crankshaft with a 2-stroke, this format puts out more power than a 4-stroke engine, and the power has more instantaneous delivery.”

There are always ways to coax a little more power and speed out of your favorite sled.

Figuring out how to make a 1000cc snowmobile go faster is simple enough when you break it down into what affects your speed and keeps your engine working at its peak.

Is 1000cc The Fastest Snowmobile

The fastest stock snowmobile is not 1000ccs. Currently, the speediest snowmobile you can buy off the shop floor is the 2021 Yamaha Sidewinder SRX LE which utilizes a 4-stroke 998 Genesis Turbo Engine.

The 998cc engine reaches over 200 horsepower beating its competitors handily.

However, the fastest snowmobile record was set by Chris Hanson on Lake Nipissing in North Bay, Ontario, Canada, in March of 2004, where Mr. Hanson’s top recorded speed was 172.2 miles per hour.

Having a 100cc engine is impressive, but it is not the ultimate determiner of speed. There are people custom building 200cc snowmobiles.

Although the builders have not posted top-speed information, you can see one of these impressive machines in action.

Check out this video from Team Racewoody Hooper. The short vid is just a quick test run to see how quickly the 2000cc engine will accelerate, and you can see the rider disappear from sight seconds later.

Do All 1000cc Snowmobiles Go The Same Speed

Not all 1000cc snowmobiles go the same speed. Beyond the obvious driver-controlled elements, there’s more going on with a 1000cc engine than you might expect.

Please think of the label 1000ccs as an umbrella term where the amount of fuel-air mixture your engine can hold doesn’t mean it pulls the same weight or works the same as every other similarly sized engine.

The fuel-to-weight ratio always affects how much speed you get, so even the same machine with different accessories and equipment can go at varying top speeds with the same engine.

You can put numerous 1000cc engines in various models of snowmobiles and get different results.

The general top speed for a sled with 1000ccs is around 120 to 130 in ideal conditions. However, larger, weightier sleds won’t reach the same top speed.

Modified racing sleds will get the best speed out of 1000cc engines, but whatever you ride, this size engine will get you places quickly.

Helpful Tips To Know About How Fast A 1000cc Snowmobile Goes

You can’t go wrong with 1000cc engines as fast snowmobiles go. You probably won’t find anything more powerful off the line, though you can customize your sled for even more power.

Here are a few more helpful tips to know about how fast a 1000cc snowmobile goes.

A 1000 cc snowmobile engine can reach speeds over 120 mph in ideal conditions. If you want to race or get places faster, getting a snowmobile with a 1000cc engine is the way to go.

At a thousand ccs, your machine can hold about a liter of the fuel-to-air mixture at a time, which means a lot of combustion happens, giving you power.

The lighter your sled, the more speed you’ll get out of a 1000cc engine, so you could use the same engine in several different snowmobiles and get varying top rates.

Although you can go up in power levels, the largest motor you’re likely to find in a stock snowmobile is around 1000ccs.

link to Why Are Snowmobiles So Fast

Standard, unmodified snowmobiles can often exceed 100 miles per hour, but stock sleds are not the quickest thing on skis. Racing snowmobiles can go over 200 mph easily. Once you cut the weight, add...