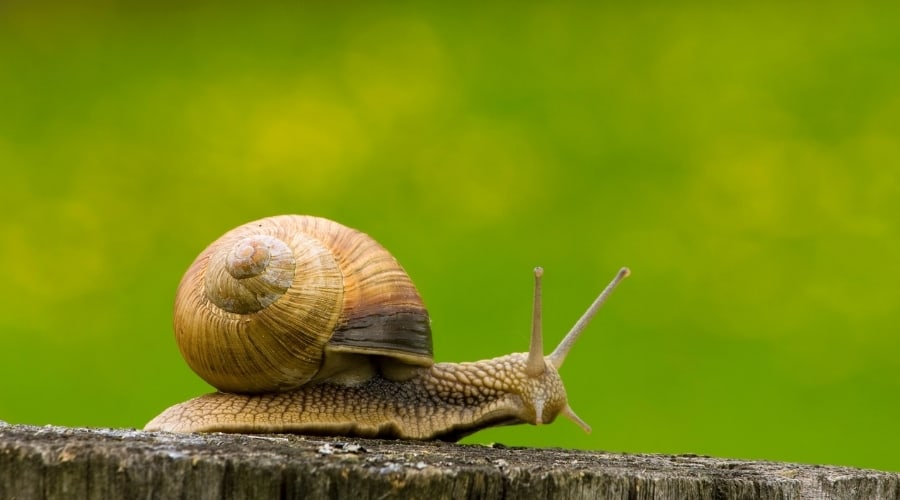 Many people don’t give a second thought to the snails in their garden. But snails, and their travel habits, can actually be quite interesting.

There’s a lot of mystery surrounding the way snails travel. Most people think of them as slow, and they can be when compared to other animals. A snail’s speed depends mostly on the size of the snail, as well as the surface it’s traveling on.

How Far Can A Snail Travel In 5 Minutes

Studies have been done on the snail’s travel habits. These studies compiled data that shows on average, a land snail can travel around .66 inches per minute.

So, in 5 minutes time, the average garden snail moves 3.3 inches. Snails prefer to travel at night, early in the morning, or late in the evening.

This means they move faster and more easily when they aren’t in direct light.

How Far Can A Snail Travel In One Hour

Consider the fact that the average human being can walk about a mile, or 5280 feet, in one hour.

This means that snails can take up to 1,500 days, or over 4 years, to travel just one mile.

How Far Can A Snail Travel In A Day

Snails don’t travel a lot throughout the day because they don’t like being in direct light. However, if a snail did travel continuously for an entire day, they could move around 79 feet in 24 hours.

Humans, on the other hand, could travel for about 24 miles in one day if they walked continuously without stopping.

How Far Can A Snail Travel In One Night

Consider night to be from 8 PM through 6 AM, when the sun isn’t up. If you have 10 hours of semi-darkness or full darkness, the snail will likely be traveling most of the time.

That means an average snail can travel around 35 feet in a night. They could get from one end of a large garden to the other end each night.

Humans on the other hand will travel more slowly at night since their eyes aren’t designed for moving efficiently in the dark. But humans would still significantly outpace the snail, even in the dark.

How Far Can A Snail Travel In A Year

How Far Can A Snail Travel In 50 Years

Snails have relatively short life spans in the wild, which means they would not live to travel for 50 years.

How Many Miles Can A Snail Travel In A Day

This is a tricky question because the travel time depends on where the snail lives. Aquatic snails, like bladder snails, can move anywhere from 5 to 8 inches per minute and they don’t have to stop moving during daylight hours.

Theoretically, snails that live in water could move anywhere from 300 feet to 906 feet in a single day.

How Fast Can A Snail Move In A Day

Snails don’t require a lot of sleep so many types can be active and awake for around 30 hours without rest. If they have a cool and dark area, an average garden snail can move up to 84 feet per day or 3.5 feet per hour.

How Fast Can A Snail Go 1 Mile

The snail’s body is made mostly of a large foot. The part they use for movement is called the sole. It secretes mucus which helps propel the snail along most surfaces.

Still, the snail is slow, and it would take a garden snail around 62 days, or two months, to travel a mile. The quicker aquatic snails could cover the same distance in less than 6 days of continuous movement.

How Fast Does A Snail Move In A Year

An average garden snail, which will be much more active at night, could move up to 30,660 feet in 365 days, without stopping.

It’s more likely that they would move around half that, which would be about 3 miles per year when you account for time spent sleeping and resting during daylight hours.

An aquatic snail could move up to 64 miles in a year if they traveled constantly.

At the circumference of the earth, the distance is 24,901 miles. Statistically speaking, a snail may move at around .03 miles per hour, depending on the size, species, and location.

How Long Would It Take A Snail To Travel Across America

The distance from Florida to Washington is 2802 miles.

How Long Would It Take A Snail To Travel 1000 Miles

Out of the types of snails mentioned, it would take the garden snail the longest to travel 1000 miles.

If the garden snail was moving constantly, without stopping for rest, it would take up to 170 years for it to travel 1000 miles.

A person, walking at a pace of 24 miles per day, could complete 1000 miles in as little as 42 days, without resting.

Snail travel is actually quite interesting when you look further into it. While snails are slow in comparison to many other animals, they can still travel a reasonable distance when you consider their size and means of motion.

Snails do face some challenges with moving about since they only have one “foot”, but they are adapted to using this foot to their benefit for survival.

Many gardeners may consider the snail a common nuisance. But, when you consider the challenges they face on a daily basis, they are actually quite remarkable.

Snails use their foot and a secreted substance to move over most surfaces. They are much more active at night as they don’t survive long in direct sunlight.

Snails are slow, but given their size and their method of movement, they are actually quite efficient in their methods of motion.

link to 7 Places Deer Sleep When It Rains

It’s rare for people to catch deer sleeping and even harder to catch them napping in wet weather. Yet, we know these elusive animals are out there somewhere curled up and bedded down against the...

Did you know some species of squirrel can detect food that’s covered by up to a foot of snow? There’s no doubt these rodents are intelligent and resourceful but, like all living things, their...