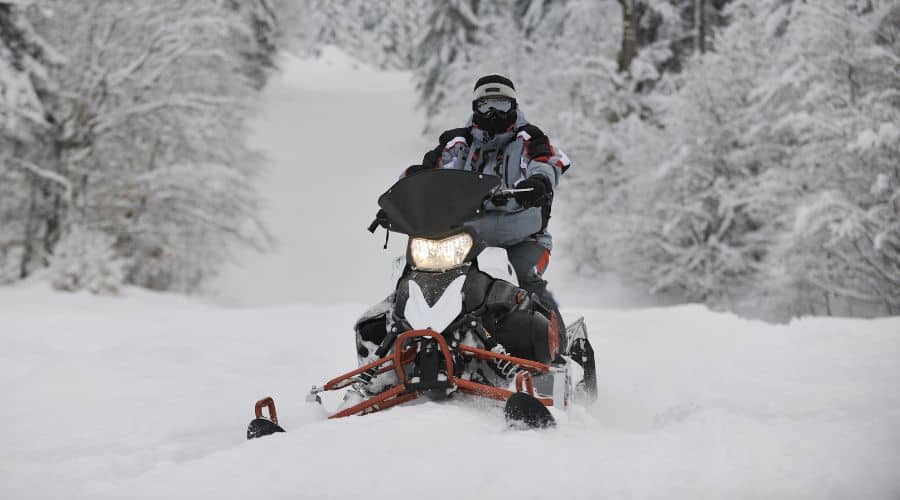 A snowmobile has two different clutches that work together to transfer and regulate power from the engine, so it becomes energy to drive the track forward, and you move. Clutches are connected to the driveshaft, which spins due to the engine power output.

How does a snowmobile clutch work? I will teach you everything you need to know to understand how this simple mechanism can move your snowmobile wheels forward or sometimes reverse.

A snowmobile clutch works by spinning to propel the shafts that drive the wheel track forward. The driveshaft from the engine is directly connected to the clutch to provide its power, and inside a snowmobile, a pair of clutches are connected by a belt. The primary clutch moves the secondary clutch to transfer energy into forward motion for riding.

How Does A Snowmobile Clutch Work

In the simplest terms, a snowmobile clutch works by taking energy in the form of rotation from a driveshaft and moving it to other parts that drive the wheel track forward.

However, that’s a bit oversimplified even for this basic machine. Below I explain the parts, how the two different clutches work together, what a CVT is and does, and a bit about snowmobile clutch kits.

Snowmobile clutches are a type of pulley. However, these simple machines are made more complex by the addition of a few components that primarily help control your speed.

Below are all the components of a snowmobile clutch:

Note: There are also attaching pieces like nuts and bolts in a snowmobile clutch. However, since these are not novel and only serve to hold parts in place, I did not include them as a component. Additionally, some snowmobile models have

Knowing the names of all the parts in a snowmobile clutch is not the same as understanding how they work together.

I will explain how the drive shaft power moves through the clutches and on to move the wheels.

A snowmobile’s primary clutch is the one that is directly connected to the engine via the driveshaft.

The rotation of this tube makes the halves of the clutch rotate. The higher the RPMs, the faster they move.

This is the only clutch with weights to change the radius of the belt rotation by pushing the horizontally inward sloped sides of the two sheaves together or letting them move apart.

Both primary and secondary clutches have tension springs, but only the primary is connected to the driveshaft and, through it, the transmission.

The secondary clutch in a snowmobile varies from the primary in several significant ways.

First, it doesn’t connect to the driveshaft or have weights. However, this clutch has cams.

A spring in the secondary clutch operates the cams or wedges, which are responsive to torque.

As the engine’s RPM rises and the primary transmits power, these cams squeeze together and tighten the belt. The process continues as the snowmobile increases speed.

Additionally, it is the secondary clutch that connects to the track drive. Without this connection, your track would not move, and your snowmobile would be a fancy doorstop.

The drivers are gears that turn and force the rubber tread to rotate around a series of idler wheels to advance.

How Does A CVT Clutch Work

A CVT clutch works by changing the diameter of the pulley. The belt goes around seamlessly.

This is accomplished by using a pulley with two sides sloped toward the center so that pulling them apart gives the belt a small space to rotate around.

Similarly, pressing those halves together with weights forces the belt to move up the slope to a broader diameter circle of rotation.

The process results in the belt going from a large to small gear ratio without ever needing to move to a different track.

The ‘continuous variable’ means it uses one single gear (pulley) that can change the size up and down based on how many RPMs you run.

Shifting becomes automatic within the engine when you use this efficient system.

If you want to see the motion of CVT in action, I highly recommend this video from Team Industries TV.

In it, they show how the spring tension causes the two parts of the clutch to move together, offering a visual demonstration of how the slopes can go from a narrow diameter to a wider one without the need for chunky gear shifts.

A clutch kit is a relatively inexpensive mod you can install on your snowmobile. These kits are known for providing high value.

By installing a clutch kit, you can decrease your gas use, saving money and eventually paying for itself.

Additionally, a kit can help extend your belt life and help cool down the clutches. Many sled enthusiasts consider kits a necessary upgrade to any model.

Helpful Tips To Know About How A Snowmobile Clutch Works

Snowmobile clutches are modern pulleys. The pulley is one of the 7 simple machines that almost all human technology is built around, which means understanding and using it is relatively simple.

Here are a few more interesting and helpful tips to know about how a snowmobile clutch works.

Your snowmobile clutches are a vital component that helps to transfer the power generated in the engine into physical forward motion.

Having two clutches allows your machine to have a CVT or continuously variable transmission that passes through a nearly infinite number of gear ratios and gives you a smooth ride over varied winter terrain.

The two clutches, also known as pulleys, are connected by a belt, and only the primary pulley is connected to the driveshaft.

link to How Does A Snowmobile Brake Work

Snowmobiles legally have to have brakes, but you'd want them for practical reasons even if they didn't. A snowmobile can move incredibly fast over snow, ice, and other terrain, so good quality,...