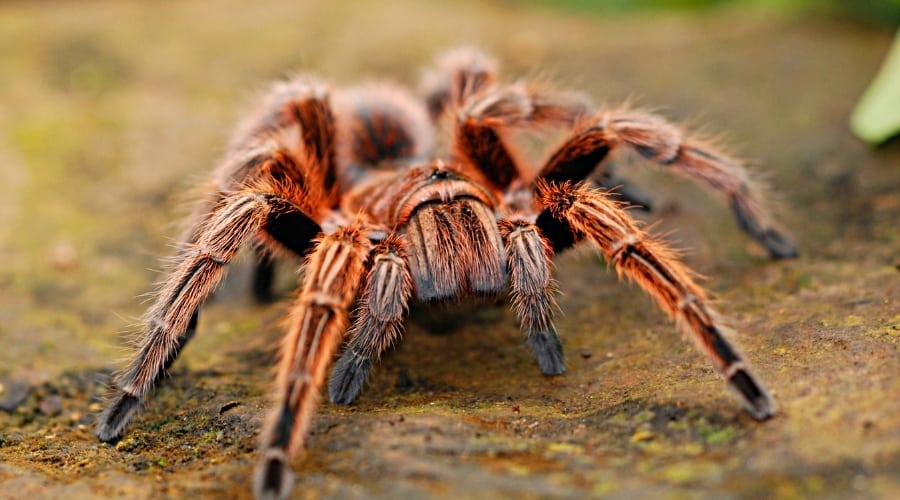 Spider silk is stronger than steel of equivalent diameter, and that’s not the only thing about these fascinating creatures that is incredibly strong. Because mammals are larger, we tend to notice them more.

That leads to humans thinking most creatures are like us with internal bones, but insects and arachnids are the ones who really rule the earth. I will explain why spiders don’t need a backbone to hold them up.

Do Spiders Have A Backbone Or Not

Spiders are Invertebrates that do not have a backbone because their outside or exoskeleton is made up of tough chitin and protein that holds their internal organs. Since their exoskeleton is segmented, spiders use joints to bend their bodies, similar to the joints between our bones.

Is A Spider A Vertebrate Or Invertebrate

Spiders are invertebrates. Since the term vertebrate refers to creatures with bones, specifically those with a spine, spiders are not a part of this group.

Although they can bend, spiders are fairly inflexible compared to more mobile animals like mammals.

Most invertebrates are insects, and people often mistake spiders for members of this group. It’s a reasonable mistake since many insects also have an exoskeleton.

However, spiders are in a class all their own called arachnids.

Insects have three body segments, while spiders have only two. Additionally, most insects have six legs to the spider’s infamous eight.

Plus, insects typically have antennae, though not always. Spiders never grow antennae because they don’t need them to sense their surroundings.

In fact, many spiders can see incredibly well with vision that extends into the infrared and ultraviolet.

How Does A Spider Function Without A Backbone

In addition to the jointed segments in a spider’s exoskeleton, they use muscles to move. According to WSJ, a spider is a system of biological hydraulics.

By contracting the muscle in the leg and pulling the legs inward, spiders can walk around.

Surprisingly, a spine is not necessary to live, function or move. It all depends on how the body is set up. For some creatures, like caterpillars and worms, movement is done with only a series of tiny muscles.

For snails, it is a single larger muscle known as the columellar muscle. Spider muscles attach to the exoskeleton and help it move at the joints just as our muscles move our bones.

Does A Spider Have An Exoskeleton

Spiders have incredibly detailed exoskeletons. While the main body is two segments, a spiders’ eight legs have seven segments apiece.

All told, a spider’s body has fifty-six parts, not including individual internal organs and muscles.

Instead of using water or blood for hydraulic movement, spiders use a fluid called hemolymph. Like our blood, the hemolymph carries oxygen and nutrients throughout.

Also, unlike humans, spiders have no vascular system. Instead, their hemolymph fills the spaces between their organs and muscles.

Do All Spiders Not Have A Backbone

There are no spiders with backbones. All arachnids use an exoskeleton to protect their delicate internal organs and muscles.

The rigid outer ‘shell’ means it is tough for them to grow. As a result, spiders molt like snakes and lizards, leaving the outer layer of their old exoskeleton behind.

Does A Red Back Spider Have A Backbone

Like other spiders, this species doesn’t have a backbone but has front and rear body segments with piercing mouth parts and palps and the usual eight legs.

Typically found in Queensland, the Redback is one of many arachnids in the area, including other spiders, scorpions, and ticks.

Redbacks are highly venomous, though they are only the second most well-known and deadly spiders in Australia. The Funnel Web spider is its more toxic cousin.

While neither of these is the most venomous globally, they are more than toxic enough to kill a human if their bite is untreated.

Does A Black Widow Spider Have A Backbone

Black widow spiders also have an exoskeleton instead of a backbone. Like their Australian cousins, these are highly dangerous arachnids and should be avoided or disposed of if you encounter them.

While an exoskeleton gives the spider decent protection against other insects, you can easily squash them with a shoe. It is the bite you need to worry about.

The three most deadly spiders in the US, according to Dengarden, are the Brown Recluce, the Hobo Spider, and the Black Widow.

In addition to their toxic venom that can kill a human, these spiders are named for their mating practice, which involves eating the males of the species.

Does A Spider Monkeys Have A Backbone

Spider monkeys are not arachnids. Instead, these adorable creatures are primates like apes, orangutans, lemurs, tarsiers, lorises, and humans.

All primates are mammals, and more importantly, we are all vertebrates, which means spider monkeys do have backbones.

Additionally, they have a vascular system and blood like other mammals instead of a spider’s hemolymph.

Like other primates, spider monkeys are intelligent and live in family groups where the mother cares for the young, giving them milk and protection.

Unlike some primates, spider monkeys have tails that are an extension of the spine. They use their tails to balance as they walk.

Does A Tarantula Have A Backbone

Tarantulas are among the most unique spiders in the world. They have an exoskeleton rather than a backbone like other arachnids.

However, they are also covered in a soft-looking fuzz which has helped to make them popular pets.

The hairs on the back abdomen section of a tarantula exoskeleton are part of its defense system and are launched at predators to deter them from attacking.

Unlike many spiders that live in trees, tarantulas spin their webs within holes in the ground. While they often dig the holes themselves with their fangs, some tarantulas ‘borrow’ other creatures’ holes instead.

Ground dwelling tendencies aside, tarantulas can climb using retractable claws at the ends of each leg.

Helpful Tips To Know About Why Spiders Don’t Have Backbones

Spiders come in various shapes, colors, and sizes, and they are found everywhere in the world, including Antarctica and even the ocean.

All spiders have eight legs and two body segments made from a chitinous exoskeleton, and none of them have backbones.

Here are some other interesting and helpful tips about why spiders don’t have backbones.

There’s more than one way to move around and keep your internal organs safe. Spiders use their segmented exoskeleton instead of bones.

This ingenious outer ‘shell’ is superb protection against the elements and bites from many small creatures. As invertebrates, spiders are less flexible than mammals, reptiles, and birds who have spines, so they’ve evolved other ways to move and hunt.

Spiders can go anywhere they need to reach to hunt for their prey using the many legs and silk they produce within their bodies.

Lizards come in a stunning array of shapes and sizes, and all of them are flatulent. Unlike most animals with fur, feathers, or skin, lizards are not known for their smell. Lizard owners know...

Frogs are famous for their long, sticky tongues and propensity for eating bugs, but can frogs eat spiders? As predators, frogs aren't concerned about danger and will gobble down anything living they...