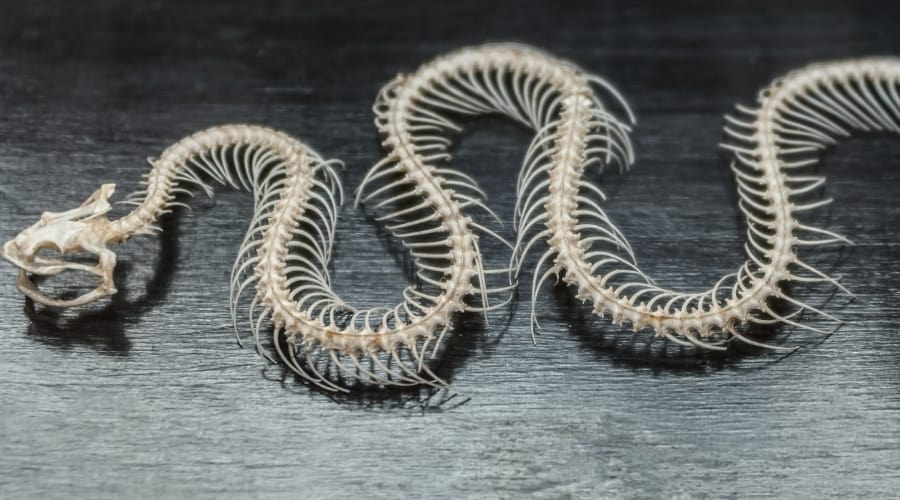 Children also recognize snake’s moving as a problem even when they haven’t seen a snake before. This is likely a hardwired reaction that is a result of evolution. Does a snake have a backbone that helps them move like that?

Do Snakes Have A Backbone

Snakes have between 100-450 vertebrae in their bodies that form their backbone. Each of the small bones that make up the vertebrae have many ribs connected to it that are free-floating on the ends so it can expand its body to easily pass food through. A snakes backbone enables them to climb, swim, curl up and move without legs or wings.

Are Snakes Vertebrates Or Invertebrates

Snakes are in the vertebrate family. All vertebrate animals have spines, and typically they also share a skull; though some, like mammals and birds, have quite a few additional bones, others do not.

Surprisingly, the eel, which certainly looks like a water-dwelling fat snake with more bones in its vertebral column than any other species, is actually a long fish.

Invertebrates commonly include worms, caterpillars, jellyfish, and insects like spiders which have a hard exoskeleton made of chitin and protein rather than internal bones.

For all their ‘boneless’ mode of locomotion, snakes have outstanding and incredibly flexible backbones.

Snakes don’t have legs or wings, so they slither around on their bellies. The backbone is what makes this form of locomotion possible.

Snakes have four distinct ways of moving using their spines.

How Is A Snakes Backbone Constructed

A snake’s ribs are connected to its spine but free-floating on the ends. This means they are not connected together like most human ribs.

Because the ribs don’t connect, a snake can expand its body easily as food passes through. Moreover, it also means the snake can move more freely because it can curl up tighter.

Snakes’ back and rib bones are connected by a series of muscles. When the muscles expand and contract, the snake can move.

In constrictor species, it also allows them to squeeze prey animals to death quickly, breaking bones and pressing the air out of the meals’ lungs. This trick keeps the snake safe from bites and other damage as it hunts.

Snakes can have over six hundred vertebrae, however most species have only one to four hundred, compared to a human’s measly thirty-three.

Additionally, they can have twelve hundred ribs. That is a lot of backbone, but they need it all.

Do Snakes Have Bones

In addition to their spine and vertebrae, snakes have a few other bones. All snakes have skulls and jawbones.

Snakes’ jaws are made of four separate parts, so they can open their mouths much wider than most species to swallow large prey.

Boa constrictors and pythons have even more bones. These species have the remaining vestiges of limbs.

They have small bones and pelvic spurs that indicate they once possessed hind legs in the pelvic area.

Evolution is slow, so we can still see these today, but presumably, these snakes will eventually lose all traces of their former limbs in the future.

Do All Snakes Have A Backbone

Every snake has a backbone. They also have some other things in common that make them part of the reptile family, such as scaly skin.

All snakes are cold-blooded egg layers that lack any fur or mammary glands. Though not all reptiles are snakes, snakes are the most famous members of the all-vertebrate reptile family.

Does A Coral Snake Have A Backbone

As snakes, coral snakes have backbones. However, that isn’t the most important part of their backs as far as humans are concerned.

Coral snakes are known for their red-yellow-black-yellow body pattern.

There’s a well-known poem in regions where these deadly snakes reside to help identify them. “Red touch yellow, kill a fellow.”

With their neurotoxic venom that kills humans very quickly, it’s important to avoid these vertebrates.

Does A Grass Snake Have A Backbone

Grass snakes are found all over Eurasia, Britain, and North America. These snakes have a vertebral column, or backbone, and are nonvenomous.

Moreover, they are often found hiding in the grass, but they could just as easily be called water snakes since they feed almost exclusively on amphibians.

Does A California King Snake Have A Backbone

Not only does a California King Snake have a backbone, but it is also known for using it to squeeze prey.

While the more well-known python gets all the glory in the squeezy-snakes category, they are not the strongest. In fact, the California Kingsnake is the strongest in the world, proportionate to its size.

Does A Python Snake Have A Backbone

Pythons have the remains of hind legs they no longer need in the form of small additional bones adjoining the spine.

Additionally, pythons have the longest series of backbones out of all the snakes with six hundred vertebrae.

Pythons are the largest snakes and use those backbones to hold up their massive frames and squeeze their prey to death.

An average adult python is about four feet long. However, they can reach or exceed six feet in some cases.

The males tend to be slightly smaller than female pythons, who ultimately boast the largest backbones out of all species of living snakes.

Helpful Tips To Know About A Snakes Backbone

Snake’s backbones are truly spectacular, but yours would be too if it were one of the only things inside you other than organs. Using their long, lithe spines, snakes can do some amazing things like climbing trees and swimming.

Here are a few extra helpful tips to know about a snakes’ backbone.

A snake’s serpentine grace and unusual locomotion are a result of its incredible spine. All snakes have backbones they use to move and hunt, but only some use their bodies to squeeze their prey.

The unconnected ribs and hundreds of vertebrae allow snakes to use their bodies in ways most species cannot. Without a backbone, a snake would not move at all.

link to Do Snakes Have Tails

Most snakes have around four hundred bones in their spine. A snakes' body is made up of one long tube shape with a head and, in special cases, a rattle, but they are mostly made of muscle and bone....