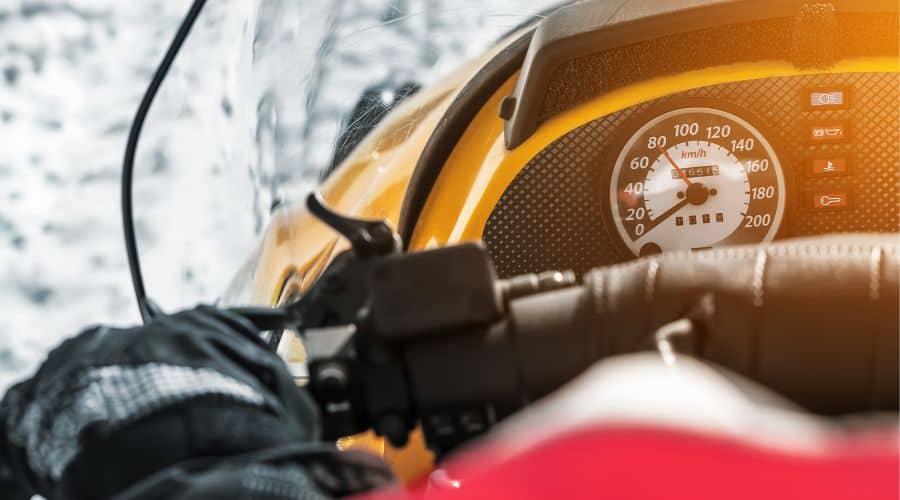 Some states have speed limits for snowmobiles while others do not, but it’s important to know how fast you’re going regardless. Whether you race or merely play on your sled casually, a snowmobile can reach speeds of well over a hundred miles per hour.

Snowmobiles have either a digital or analog speedometer which displays the speed in either mph or km/h and also contain the indicator lamps and mode buttons. The older analog speedometers are linked mechanically with the gearbox and use electromagnetism to gauge speed. Meanwhile, a digital speedometer can work using GPS, or they use a different magnetic system.

Is There A Speedometer On Snowmobiles

There is a speedometer on snowmobiles. Although these devices look slightly different from your car’s version, they are still easily recognizable.

You will either have a small round analog speedometer with a dial like a watch hand that moves around in a circle to point at your current speed or a digital display.

While many modern snowmobiles have a digital readout that tells you the number of miles per hour or kilometers per hour at which you are currently traveling, this isn’t always the case.

Classic analog gauges are highly accurate, and you will find machines that use this system produced today.

Naturally, if you have an analog display, it is simply a circular dial with a hand that moves up and down a list of numbers that indicate your speed.

Typically you will have a second gauge beside an analog speedometer that tells you how much gas you have left and may have additional features like a check-engine light.

I will give you an overview of the parts of a digital gauge using the 2020 Ski-Doo as an example.

Keep in mind your display may look or work differently. It is essential to read the manual that comes with a snowmobile when you purchase it.

The (Ski-Doo 2020) gauge is located at the base of your front windshield. Its LED display is bright red and impossible to miss.

This gauge is 7 inches wide; you can customize it to show you the information you want.

The speed is preset to display in the middle of the screen; below that, two smaller numbers show your average and maximum speed.

Other options for your screen include an odometer and trip meter. On the trip/odometer screen, you will also have a side display showing a gas pump that indicates how full your tank is at the time.

The sidebars can also display the thumb and hand warmer temperature at the touch of a switch.

Additionally, on the main preset screen is a temperature gauge and a clock you can set for 12 or 24-hour time.

The menu option on a Ski-Doo 2020 offers additional resources and lets you change the displays around.

You can set the time and look at your miles-per-gallon if you want to see them. For a better look at this particular model, I recommend checking out this video from brand ambassador Rob Koenig.

He walks you through every feature and shows you where to find switches like the menu button in case you need to make adjustments.

How Do Snowmobile Speedometers Work

There are two types of speedometers, but they both use magnets to track your wheel’s rotation speed.

Although they function differently, both systems track how quickly the wheels rotate, which tells the dial or digital display how fast you are moving.

When your wheels move, they are spinning the attached sensors.

Thanks to the display, that motion gets translated into a speed reading you can understand.

Below I will explain how both types of sensors work to track your current moving speed.

However, it’s important to note that a few high-end models may have a digital system that uses a global positioning satellite (GPS) to ping your location and display it that way.

In that case, the information comes from the satellite in space as it tracks your trip and calculates how fast you’re moving based on how far you have gone.

These flexible, twisted wires work like a driveshaft. Both ends rotate, and the speedometer end turns a magnet inside a hollow metal cup, known as the speed cup.

The magnet in the cup moves freely, only constrained by a thin coil of wire called a hairspring, and it is not attached to the speed cup.

Meanwhile, the speed cup is connected to the pointer and moves it up or down based on the magnet inside.

A digital speedometer uses either reed switches or Hall-effect sensors to check your rate of movement.

Reed switches are used in devices like laptop computers and flip phones.

These simple mechanisms turn on and off when a magnet is nearby, and each time it switches, your electronic speedometer registers that as a track rotation.

The Hall effect also uses magnets, but registers the current instead of flipping a switch. As, Explain That Stuff tells us, “As the speedometer cable rotates, it turns the magnet at the same speed. The spinning magnet creates a fluctuating magnetic field inside the speed cup and, by the laws of electromagnetism, that means electric currents flow inside the cup as well. In effect, the speed cup turns into a kind of electricity generator.”

Snowmobile speedometers are relatively accurate. They can become worn and stop functioning correctly.

Especially in older analog models, the wire connecting to the wheels tends to become brittle over time and may break off. Digital speedometers are accurate to 0.01 mph.

GPS speedometers are the most accurate but least used because they are the most expensive to produce and run.

Digital speedometers are technically more accurate than analog, but the difference is so minimal that it doesn’t make a functional difference.

However, some digital speedometers are intentionally set ‘optimistically’ to give drivers a little more leeway and help them avoid tickets because the displayed speed is slightly higher than the actual rate of movement.

Helpful Tips To Know About If Snowmobiles Have Speedometers

Snowmobiles, like most vehicles, do have speedometers. In fact, if yours doesn’t come equipped with a functional speedometer, it is vital to replace this part immediately.

In some areas, riding without a functional speedometer is not legal.

Here are a few more helpful tips to know about if snowmobiles have speedometers.

Your snowmobile does have a speedometer, or at least it should. If your speedometer is missing or broken, you should replace it immediately.

Knowing your movement rate is essential if you have an analog, digital or GPS-based speedometer.

Unfortunately, speedometers are expensive to repair, and a total replacement is usually the best option if it fails.

However, it would help if you always remembered to check the driveline gear adapter key, cable, and gear adapter before you assume it is the device itself that has a problem.

link to How Does A Snowmobile Brake Work

Snowmobiles legally have to have brakes, but you'd want them for practical reasons even if they didn't. A snowmobile can move incredibly fast over snow, ice, and other terrain, so good quality,...